The term “integrally suppressed” is becoming more and more popular in the rifle world. The Daniel Defense DDM4ISR is one of the more intriguing entries thus far. 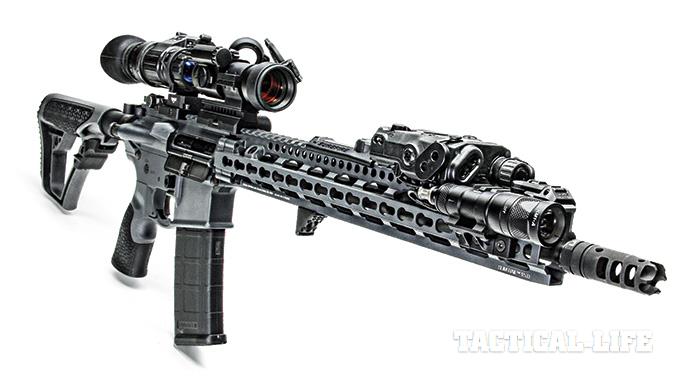 Chambered in .300 Blackout, the rifle features a 9-inch cold hammer forged barrel with a permanently welded suppressor. The suppressor is approximately 10 inches in length. The rifle is a one tax stamp gun, for the suppressor only. Since the integral suppressor extends the barrel to an NFA-required 16 inches in length, it is not considered an SBR.

“It’s not classified as an SBR, which is handy, so you only have to pay the $200 tax stamp once on it,” says Thomas Carlson, Daniel Defense’s Director of Marketing Communications.

Another impressive feature is the noise, or lack thereof. The rifle shoots sub-120 dB when firing subsonic ammo. The silence was quite impressive out on the range when the “ping” of steel was noticeably loud than any rounds leaving the rifle

“It’s super fun to shoot,” Carlson says. “Since it’s a low-pressure round, the suppressor doesn’t get very hot either.”

Watch the video above to see the DDM4ISR in action. For more information, please visit DanielDefense.com.

If you like this, our friends at Tactical Life got the scoop on the all-new Daniel Defense DELTA 5 — the manufacturer’s first bolt-action rifle. Check it out.