Every issue of Athlon Outdoors’ “Ballistic” magazine features a gun giveaway, so why should this special “Ballistic Precision” annual be any different? For the premiere issue of Ballistic Precision, we’ve partnered with Savage Arms and Bushnell for a serious, tack-driver of a sweepstakes.

Check out BallisticMag.com/win-savage10 for a chance to win this killer package. Watch the video above for an exclusive look on the sweepstakes rifle.

Now on to the actual Savage 10 BA Stealth we’re giving away. 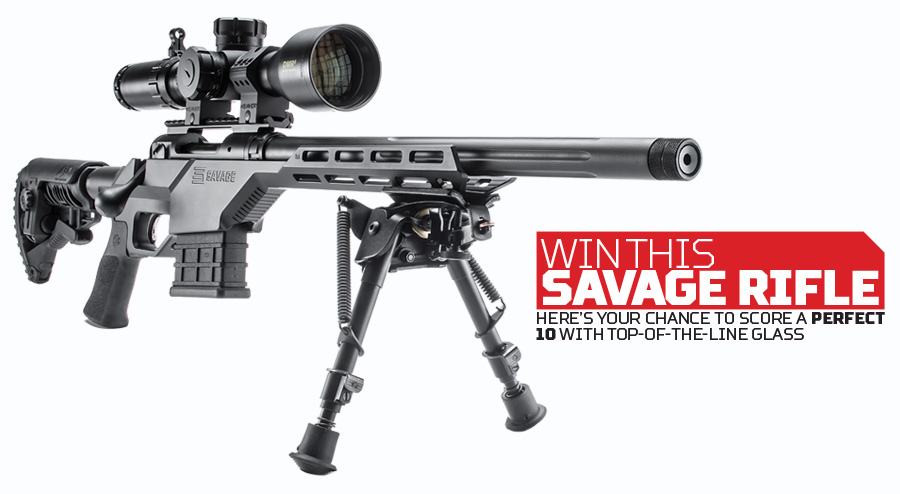 I have been in the firearms industry long enough to have seen trends come and go. Some very interesting items catch on and stay for the long haul while others are nothing more than a momentary lapse of reason. One trend that has gained traction is really based on a realm that has existed for decades, yet it went unnoticed and misunderstood by a majority of the shooting public: precision shooting.

To the uninitiated, visions of Olympic shooters in odd jackets and glasses with a lens covered come to mind. But it is obviously much more than that. Precision shooting has gained popularity because it is enjoyable and, honestly, addictive. With very little equipment, one can start precision shooting and then go from there.

One of the roadblocks for some people, though, is the cost of entering this arena. There was a time not too long ago when the cost of a rifle capable of doing what you needed it to do would bring your checking account to tears. Throw in the glass required to finish things out and you’d begin to wonder if your kids really need to go to college. The fortunes of those desiring to shoot long and sharp have turned for the better as the good folks at Savage Arms have heard our cry. With a collective engineering effort, the company has launched the Savage 10 BA Stealth, a tack-driving precision tool that comes in at half the cost of other rifles in this category.

Savage has a well-established reputation in the rifle world for producing solid guns at prices that won’t break the bank. The Model 10 BA Stealth has only solidified that standing. “We decided to build a rifle that delivered the same accuracy that the 10 and 110 BA were famous for, but at a manageable weight, with a modern chassis and attractive price,” said J.J. Reich, communications manager for Savage Arms.

One of the first things I noticed when I unpacked my test rifle in .223 Remington was its weight. The rifle is significantly lighter and sleeker than others in this category. While it is not a featherweight, its 9.24-pound weight is a drastic difference from some of my other rifles, many of which approach the weight of a minivan when a sound suppressor is added.

The Savage 10 BA Stealth is built up off of a factory blueprinted Savage action that is then paired with a fluted carbon-steel barrel with a 1-in-9-inch twist rate. Savage is plugged in and knows that many people like to suppress their rifles. With that, the company has included a 5/8×24-tpi-threaded muzzle with a thread protector. This may just be “cool” to some, but to serious shooters, it is an example of the forward-thinking nature of Savage and its desire to present a range-ready product. In short, it saves me the time, effort and expense of threading the barrel to begin with. The action also includes a bolt with an oversized knob. This provides good purchase; it’s smooth with no wiggle or play.

All of this is carefully seated in a Drake Associates Hunter Stalker chassis that has been precisely machined from a billet of aluminum. This is a slender, well-made chassis perfect for this rifle. It’s also a monolithic design crafted from a single piece of aluminum, as opposed to others that are bolted together. It includes M-LOK slots on the forend for mounting accessories, and there’s also a front swivel stud up front to mount the bipod of your choice. The forend is relatively short compared to other chassis rifles, which leaves a large portion of the barrel open for improved cooling.

At the rear, Savage has included a FAB Defense GL-Shock buttstock. This allows the shooter to adjust the length of pull as well as the cheek height. The stock has an adjustable elevator-style cheekrest that is normally only found on aftermarket stocks or even as add-ons—a very nice feature. If desired, you can easily swap out the stock for an aftermarket AR-15-style, commercial-spec buttstock.

On top you’ll find a Picatinny rail for mounting optics, and the grip is a rubber, AR-style Hogue unit. The magazine release is a push-forward lever, and it controls the included 10-round, polymer, center-feeding box magazine.

The Savage 10 BA Stealth includes Savage’s renowned AccuTrigger, which is worth its own discussion. While many people now recognize the name, few really understand how revolutionary it is.

First off, the AccuTrigger system allows the shooter to adjust the pull weight from 6 pounds all the way down to 1.5 pounds. Then there is the silver-colored AccuRelease lever mounted within the trigger body and sharing the trigger’s pivot point in the housing. Many have noted that this reminds them of a Glock trigger.

When at rest, the upper end of the AccuRelease is positioned directly behind the sear, where it will block the sear should any external force cause it to jar out of the trigger notch. This is a vital feature because it was essential that the gun be drop-safe. In normal operation, the trigger finger will first take up and depress the AccuRelease lever so that its forward tip drops out of the path of the sear, allowing the sear to move fully backward when released by the trigger at whatever weight you have adjusted the trigger pull to be.

Adjusting the pull weight is as simple as removing the two pillar-bedding screws and lifting off the stock. You insert the tool supplied with the rifle into the bottom of the trigger return spring, engaging the spring tail with the slot on the tool. For a heavier pull, turn the tool clockwise, and for a lighter pull, turn the tool counterclockwise. You’ll hear clicks as you go to help index where you are. This a brilliant design and a perfect fit for a rifle obviously built to be tuned to individual shooters.

The last fine detail is the newly designed, ambidextrous, teardrop-shaped safety. It sits at the rear of the receiver and is easy to find and manipulate. It has three positions. At the rear, the safety locks the trigger/sear interface as well as the bolt. In the center position, it locks the trigger/sear but allows the bolt to be operated for unloading. All the way forward, the gun is ready to fire. As you can see, just like everything else on this rifle, the safety is designed very well with performance and fit in mind.

A clear sky, cool temperatures and standard Arizona winter weather made for a great range day. To test the Savage 10 BA Stealth, I added a Bushnell 3.5-21x50mm Elite Tactical DMR II. This is a well-made scope with a crisp new G3 reticle. The entire scope is less than 13 inches long and offers exceptional performance. The G3 reticle provides precise holdovers at any range, and allows shooters to more quickly engage moving targets. The ThrowHammer lever makes magnification changes a snap with the flick of a finger, and the elevation turret provides 10 mils of adjustment per revolution and is also equipped with the easy-to-set RevLimiter zero stop for a positive return to zero. In short, this is a very nice piece of glass that ended up making the range day even better.

To test the Savage rifle’s capabilities after a quick zeroing, I used match-quality .223 Remington rounds from CorBon, Federal and Remington to shoot five-shot groups at 100 yards. Slow, serious shooting produced fantastic groups, with the best coming in at 0.45 inches with CorBon’s 77-grain MPR (Multi-Purpose Rifle) ammo. As with any precision rifle, I believe the gun is capable of even better groups if fed handloads and shot from a bench.

The trigger broke cleanly, and the smooth throw of the bolt put me back into action very quickly. After collecting that data, it was time to judge the rifle’s overall performance. I also moved the rifle into an elevated tripod using a HOG Saddle. What started out as simple “near/far” drills on steel quickly turned into an enjoyable speed shooting event because the rifle was as fast as it was accurate. I was limited to 800 yards, but I am certain this is a 1,000-yard rifle. (Yes, you can shoot .223 Remington out to 1,000 yards.)

My impressions of the rifle’s performance were all positive. The critical items such as reliable functioning and accuracy were quickly verified. Beyond that, it was a matter of fit and comfort. Once again, these boxes were easy to check as I was able to fit the gun to my body. So the ruling is in: The Savage 10 BA Stealth is a winner.

As Colonel Townsend Whelen would say, “Only accurate rifles are interesting,” and this new Savage is certainly interesting. The company has managed to accomplish something that is exceedingly rare in the firearms world. It produced a very accurate rifle at an affordable price. I give Savage Arms even more credit for not bumping the price up a little higher simply because the company could.

This is a great rifle that will serve any shooter quite well. And now you can enter for a chance to win this exact rifle/scope combo by visiting ballisticmag.com/win-savage10. If you are interested in accurate rifles, or possibly getting ready to start your precision rifle journey, the Savage 10 BA Stealth is absolutely worth a very close look.

For more information on the rifle and scope, visit SavageArms.com and Bushnell.com.

This article is from the premiere issue of “Ballistic Precision.” To subscribe, please visit OutdoorGroupStore.com. 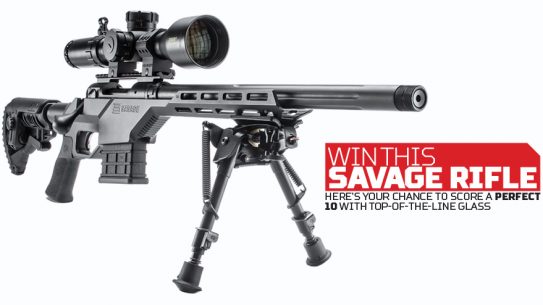 One person will be the lucky winner of a new long range Savage Mod...