Mister Manners: When Conversation Turns to the Gun Control Debate

You are attending a weekend rally and end up sitting with a large group of people between events. Discussion of ideas begins to flow, and the Second Amendment comes up. Several people chime in and make good points, but a person in the center of the group utters the classic statement, “I’m pro-second amendment … but.” What do you do? Or even more importantly, what do you think? 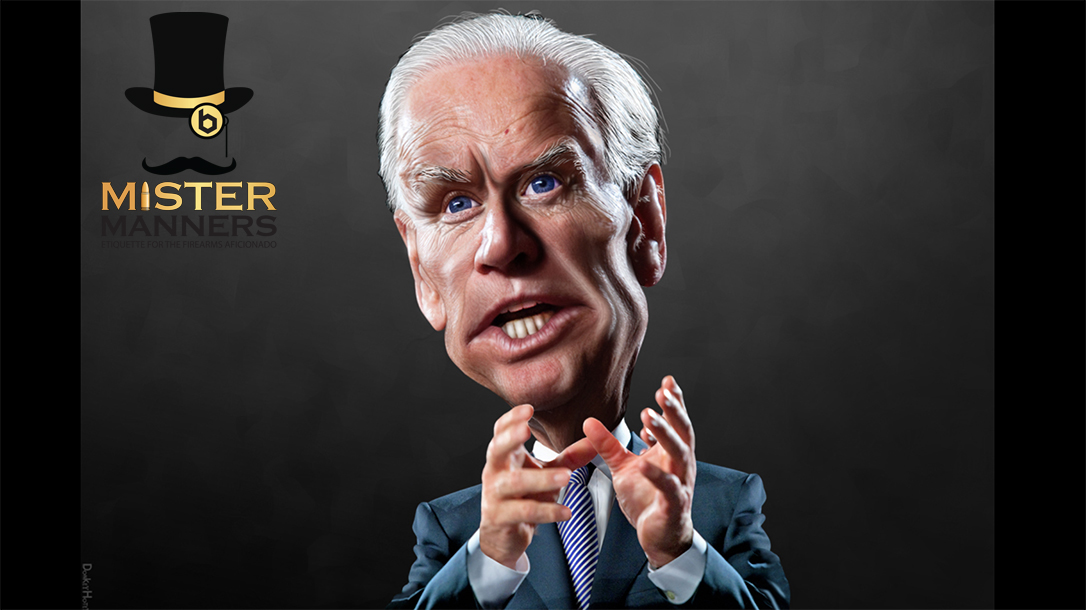 This scenario plays out everyday across the firearms community. People preach support for the Second Amendment but include personal qualifiers for people to exercise that right. It is honestly maddening at times. What I have come to believe over the years is that a vast majority of people have been conditioned to believe certain things.

That conditioning varies by their location. A vast majority of people that utter the “but” statement come from deeply blue states with draconian guns laws. While they may be Mr. or Mrs. Freedom in comparison to their neighbor, they still harbor some gun control ideology. When confronted by saying they support gun control, these people usually reel back and say they are pro 2A. But the truth is that they do support different levels of gun control. This is not helped when politicians and experts blatantly lie about guns and crime. President Biden, just recently once again opened his mouth to demonstrate his ignorance on guns, crime, and the 2nd Amendment. His statements are worth an article by themselves, but I digress. The challenge is then, so how do we address these people that want to live on both sides of the fence?

I believe people like this must be challenged and have a spotlight put on their hypocrisy. That word may seem harsh, but that is exactly what it is. In most cases, these people have no idea that they are actually pro-gun control because they have been slowly conditioned to accept certain things about guns as truth. People that live in New York are going to see things differently than people that live in Arizona, for example. People in New York have been so conditioned to government overreach that they just accept it as the norm.

There are obviously people in both places that break this mold, but in general, it is true. It is important to mention that these people are genuinely unaware that they harbor gun control sentiment as well. My suggestion is that we give them a hearty dose of facts and in essence, hold a mirror up to them.

My first question to them is “why do you believe that?” This question will rock the core of their belief system because their response is almost always rooted in emotion as opposed to fact. They may struggle to present some talking point fed to them over the years by the liberal overlords, but once they say the words, they realize how hollow and absurd they sound. The next question I would have for them is to tell me one gun control law that has worked. This is a good exercise for anyone in the 2A world. The truth is that gun control laws do not work to reduce crime. If that were the case, Chicago would be a model of peace and harmony. Instead, it is reminiscent of 1980’s Beirut with rolling gun battles nightly. Criminals are going to criminal no matter what the mayor says.

The last thing I would touch on is gun ownership. The idea that you are required to have a permit to own a gun in certain locations is just asinine. This has absolutely nothing to do with crime and everything to do with control and taxes. There are people who believe there are certain guns people should not own. Once again, their rationale for this is based on emotion and not fact. This is especially true with ARs. In the end, it comes down to the fact that “they look scary.” There is no proof at all that rifles are a problem in any way.

The same goes for automatic weapons. You have a better chance of getting struck by lightning than seeing an automatic weapon used in a crime. Not because the government is protecting you, but because they are tough to acquire based on price and availability. That does not stop the left from quietly painting an image of gun battles in the streets unless people agree to their gun control plans. I saw this firsthand in Arizona years ago when we went to constitutional carry. The left painted pictures of gunfights in the streets and mass chaos should the law be passed. It obviously never happened, but they simply moved their chicken little performance to another gun control effort.

In short, I encourage you to challenge these people politely. In most cases, they have no idea that they have been conditioned. Contrary to what the president says, the Second Amendment shall not be infringed. Any attempt to control guns is not based on crime in any way. That is simply a ruse plain and simple. Gun control is about disarming the public without question. This is not a conspiracy, it is fact. Gun owners in this country are some of the most law-abiding and polite people on earth. It is never the gun that is the issue, it is the person on the trigger. No law or gun control measure will ever solve that. Until next time – educate your friends and stay safe!