Since 2018 we’ve been following a Genesis Arms of Coeur d’Alene, Idaho and its Gen-12 innovation which enable the conversion of a DPMS-pattern AR-10 to 12 gauge by simply swapping upper receivers and using Genesis Arms’ brilliant magazines. Getting rimmed cartridges to behave in a magazine that fits an AR magazine well and still presents the round at an appropriate feed angle was just the first of Genesis Arms’ accomplishments. Don’t be fooled by shotguns stylized to look like an AR. The Gen-12 is a true conversion. 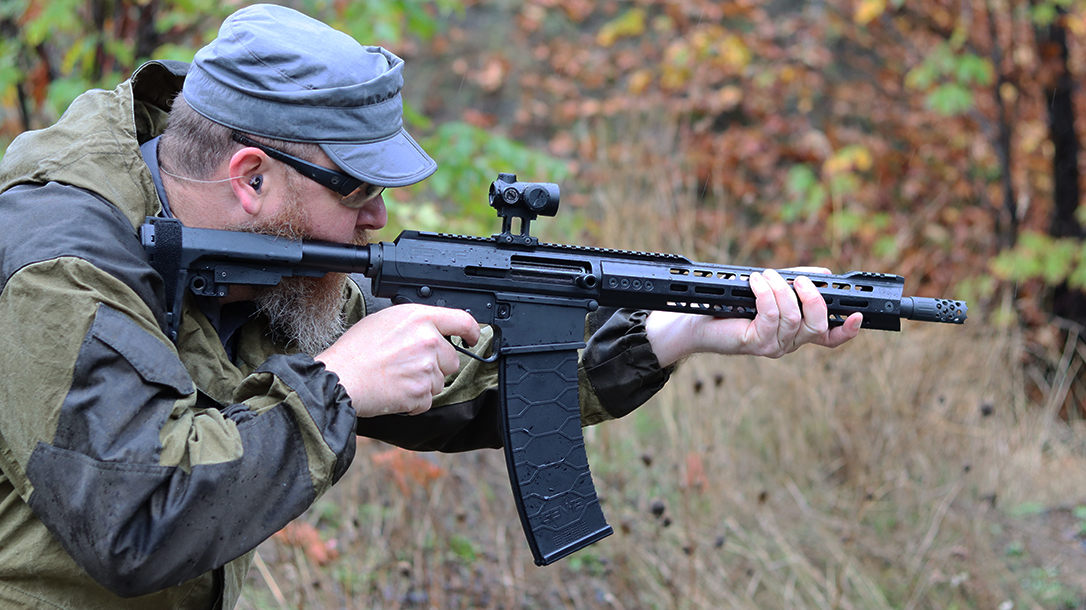 Genesis Arms has continued to innovate and improve its design, and in October, 2020 we brought you an update when it upgraded to VangComp barrels.

Recently we visited Genesis Arms for a demo day featuring the latest evolution of the Gen-12. The star of the show was a 7-inch-barreled and suppressed full-auto gun. Let that soak in for a moment. A 12-gauge semi-auto with just a 7-inch barrel not only running, but chucking empty hulls at a rate in the neighborhood of 900 per minute with controllable ease. The secret of that control is Genesis Arms’ new recoil mitigation system. What made the suppressor impressive is that the Gen-12 runs on a short recoil system, which requires the barrel to reciprocate slightly. Adding the weight of a suppressor or muzzle device would interrupt that, until now.

The Next Generation Gen-12

Despite plenty of evidence like that seen in our video in the October article, Genesis Arms wanted to find a way to reduce recoil even further. Shooter comfort was already fine, but it was discovered that some standard AR stock components were breaking under 12-gauge recoil impulse. The new recoil mitigation system’s details remain classified, but the effects show clearly seen in our video, including slug shots and full-auto birdshot.

Genesis Arms made suppressor use possible thanks to developments originally intended to make the Gen-12 a breaching gun for law enforcement. Previously pushing the muzzle against a solid object risked mechanically unseating the action as part of the short-recoil operating system. Now Genesis Arms has a way to create a fixed mount for muzzle devices. This enables use as a breaching tool or the mounting of larger and heavier muzzle devices such as a suppressor.

Speaking of suppressor use, see the photo of how “dirty” the gun was after more than 600 rounds of suppressed full-auto fire and a generous dusting by the day’s breezes. Operating with a short-recoil system instead of gas means the guns stay cleaner longer, and adding a suppressor has no ill effect.

For more on the Genesis Arms including pricing and availability Gen-12, please visit genesisarms.com.