A few years ago, Genesis Arms started the first 12-gauge AR conversion by mating an upper of its own design to the popular DPMS Gen I AR-10 receiver. Now, in 2020, Genesis continues to advance with new offerings and configurations. If you’re not familiar with the Genesis Arms Gen-12, it’s a 12-gauge upper that simply swaps on to your Gen I DPMS AR-10-style lower (with the curved receiver cut). It’s as easy as that. It’s just like changing any upper on an AR platform, except now you’ve got 12 gauge at your disposal. 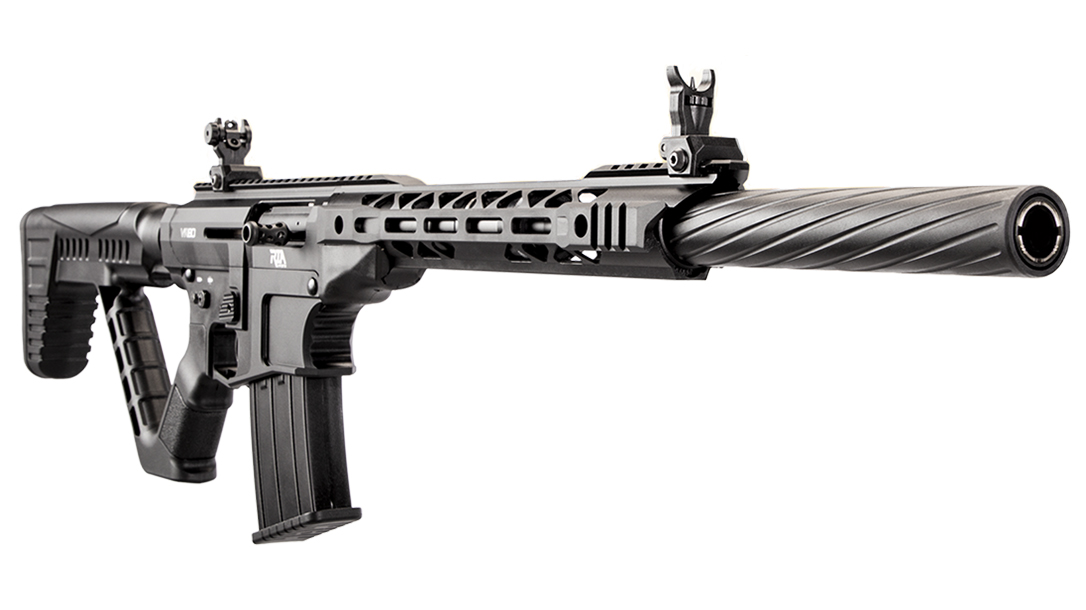 VR80: Armscor’s Semi-Auto Shotgun Is Actually an AR Before Anything

How the Genesis Arms Gen-12 Works

Understandably the Gen-12 is of great interest to specialty law enforcement and military units. The technology allows them to run a rifle or shotgun from the same lower, which simplifies and accelerates training and simplifies logistics.

This feat was not as easy as one might think. Yes, there are currently plenty of inexpensive AR-looking shotguns imported to the U.S. The difference here is that the Gen-12 is an upper that lets you keep your AR-10. It’s worth nothing that complete firearms are also available. As for the upper, Genesis Arms recommends a special bolt and magazine catch swap for full function. However, the Gen-12 is reverse compatible with your original AR-10 upper. With those parts swapped, the same AR-10 lower receiver that hurls 308-class calibers at range can now bark 12 gauge for social distances.

The magic consists of two parts. Firstly, Genesis makes a semi-auto shotgun that isn’t picky about loads and also runs with a standard AR-10 buffer and spring. Secondly, Genesis creates a magazine large enough to stack rimmed shotshells, yet small enough and straight enough to be compatible with an AR-10 mag well.

The magazine challenge is further exacerbated by the need to present a round at an angle flat enough for the bolt to pick it up, yet steep enough to ensure reliable feeding. Remember, unlike rifle rounds, shotgun shells offer no tapered shape to help in guiding feed. Genesis Arms created a special follower and feed lip design to make this happen; this is the masterpiece of the Gen-12 system.

The cyclic solution came from using a short-recoil based system. Upon firing, the barrel recoils rearward a short distance with the bolt and carrier while pressures drop. By the time the load exits, the barrel stops its rearward movement and rebounds forward. Meanwhile, the bolt and carrier continue rearward from momentum. As a non-engineer ,I assumed this meant the shotgun would be sensitive to how much recoil the round creates. However, testing with loads as light as white-box birdshot proved that to be an incorrect assumption.

In all, I tested at least 13 different loads—including Winchester AA #8s at only 1,145 fps—and didn’t have any issues. As an added testament to reliability, I shot those Winchester AA loads through a 10.5-inch barrel on a gun equipped with a Law Tactical Folder, which adds weight to the carrier.

The latest evolution of the Genesis Arms Gen-12 includes the use of barrels treated by Vang Comp Systems. The creation of the Vang Comp System came at the request of a government agency that sought to decrease the risk of stray shot and decrease recoil. The treatment stretches the forcing cone and effectively creates a choke within the barrel.

For those not familiar with shotgun barrel construction, the forcing cone is the taper from chamber diameter permitting the shotshell to fit to the actual bore diameter the shot and cup travel through. This is one reason 3-inch chambered guns tend to not pattern as well with 2.75-inch shells, as the wad begins to spread and then crams back down; this often causes shot deformation. The extreme length and soft taper of the Vang Comp System reduces shot deformation and back boring of the barrel creates an effective choke for tighter patterning.

While a standard cylinder bore is said to cause shot spread of roughly one inch per yard of flight—a 25-yard shot will pattern at least 25 inches—the Vang Comp System guarantees 10-to-12-inch patterns at 25 yards; a claim that better than halves shot dispersion. The result is more shot on target and more lead delivered accurately.

While testing in heavy Pacific Northwest rain with a variety of loads all the way down to 1-ounce birdshot at 1,250 fps, we had no issues aside from a couple of failures to lock open on an empty magazine. With the gun broken in after another 30 shots or so, we encountered no further issues.

We also tested to see how the Vang Comp Systems barrel might affect patterning. We did this by firing buckshot at a reduced-size torso target from about 20 yards. To test this, we painted the target and fired one shot at the steel. Then we counted the pellet impacts from an un-choked 18-inch traditional cylinder bore shotgun. We then repeated the process using the 14.5-inch with the new Vang Comp Systems barrel and then an older 14.5-inch Genesis Arms non Vang-Comp gun.

Impressively, we found the same amount of impacts out of all three barrels. The difference, however, was in the pattern density. The 14.5-inch Genesis Arms guns lost no pellet impacts in comparison to an 18-inch traditional barrel. However, the Vang Comp Systems barrel had the tightest shot density. Ideally we would’ve confirmed this further with loads from multiple manufacturers. Unfortunately, as you can see in our testing video below, conditions were less than ideal for sustained testing.