by John Scott
in Accessories, Gear
0

Hera Arms MPSS: Hera Arms’ Multi-Purpose Safety Selector (MPSS) is the ultimate set for safety customization. Each MPSS comes with five polymer switches in three different colors, for a total of 15 switches. For further customization, its selector drum may be configured in either 45- or 90-degree modes.

Studies estimate that anywhere from 70 to 90 percent of people are right-handed. If that’s the case, then why would the majority of shooters, who are right-handed, need ambidextrous AR safeties for their firearms? Could it simply be a case of people wanting every bell and whistle on their rifle? What use could there be for a non-leftie?

Some right-handed shooters will tell you that ambidextrous AR safeties are a waste of money and absolutely unneeded. We disagree. Some of us are right-handed and find ambidextrous safeties useful. When we shoot AR-15s and other AR-type rifles, it’s fast and safe to use our trigger fingers to flip the switch on the right side of the lower receiver back to the “safe” position. When we’re ready to fire, we flip the lever on the left side of the receiver down to the “fire” position with our thumbs.

It’s the way we’ve trained, and it works very well for us. By not having your trigger finger anywhere near the trigger—since it’s busy flipping the safety switch—you avoid the possibility of a negligent discharge. Using the thumb to place the rifle on “safe” can be awkward, and some people keep their trigger finger on the trigger while doing so, which increases the probability of an accidental discharge. For those who are more tactical-minded, the idea of transitioning hands and shoulders to fire your rifle is also a possibility in a real-life scenario. Ambidextrous safeties also make this easier to do safely.

Ambidextrous safeties have come a long way since they were first introduced. Manufacturers now offer them in a variety of different shapes, contours, and colors, and many now even feature interchangeable lever sets. The opportunity to tailor-fit your rifle’s safety is a good thing in our book. The following guide covers ambidextrous safeties that will fit most AR-15, AR-10, DPMS-patterned AR rifles and more. Take a look and see which one is right for you. 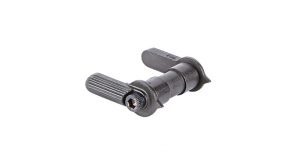 The Bravo Company USA Ambidextrous Safety Selector-Semi is a standard, drop-in ambidextrous safety selector that allows you to operate your semi-auto AR-15 or M4 safety selector from both the right or left side of the weapon. For more information visit: bravocompanyusa.com 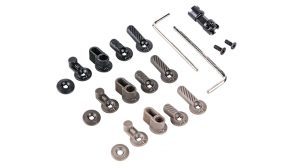 The Hera Arms’ Multi-Purpose Safety Selector (MPSS) is the ultimate set for safety customization. Each MPSS comes with five polymer switches in three different colors, for a total of 15 switches. For further customization, its selector drum may be configured in either 45- or 90-degree modes. For more information visit: hera-arms.com 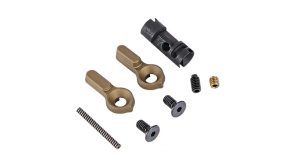 The JP Enterprises JPFC-SA ambidextrous AR safety is both adjustable and reversible, and it includes an extra, ultra-low-profile ambidextrous lever. There are three lever options for each side. This safety can be used to eliminate the safety fitting process for JP’s fire control kits. It also provides the perfect safety fit for many other aftermarket trigger systems. For more information visit: jprifles.com 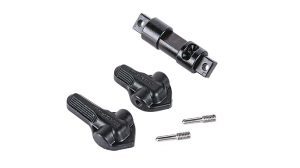 Noveske’s STS 60-Degree Selector offers the user an ambidextrous, drop-in, 60-degree throw option to replace their standard safety. Tuned for smooth action, the selector drum is machined from stainless steel and is nitride finished. Short and long Magpul SSG levers can be attached on either side. For more information visit: noveske.com 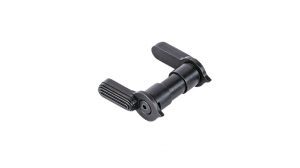 The POF-USA ambidextrous AR safety selector is a drop-in upgrade designed to increase the shooter’s options and maximize the efficiency of taking the rifle from “fire” to “safe.” For more information visit: pof-usa.com 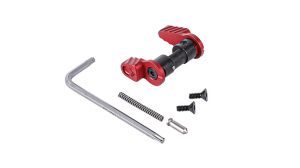 The Rainier Arms Selector Switch – Standard / Short (45 Degree) was made for use in short-throw-capable AR lower receivers. This ambidextrous selector switch features detachable and interchangeable levers on both sides for maximum flexibility and user preference. One short and one standard-length lever are included. For more information visit: rainierarms.com 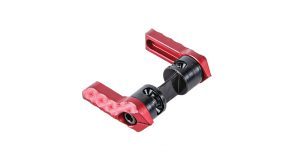 The Seekins Precision SP Safety Selector Kit is a drop-in replacement for all mil-spec safeties. It is available in multiple colors and allows you to choose between a 60- and 90-degree throw. One short and one standard-length lever are included. For more information visit: seekinsprecision.com 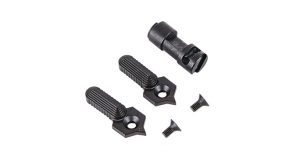 The Strike Industries HEX Ambi-Selector Switch is available in both 60- and 90-degree versions and the HEX ambidextrous selector switch features a heat-treated steel selector and textured levers. The selector’s levers are grooved for additional grip. For more information visit: strikeindustries.com 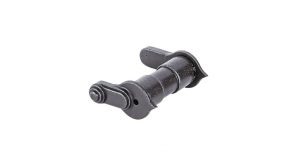 The TROY Ambidextrous Safety Selector uses stainless-steel detent plungers to lock levers into place instead of screws that could come loose or strip. The left-side lever has been built for a more positive feel, while the right side features a lower-profile lever that will not interfere with trigger operation for right-handed shooters. For more information visit: worldoftroy.com 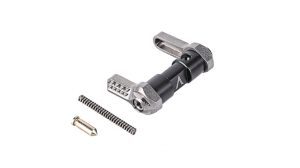 The V SEVEN Titanium Ambi Selector is user-convertible from a standard 90-degree throw to a shorter 57-degree throw. This corrosion-resistant selector comes complete with titanium levers, core, and screws. One short and one standard-length lever are included. For more information visit: vsevenweaponsystems.com