FIRST LOOK: Laugo Arms Alien Has the ‘Lowest Bore Axis in the World’

We’ve seen a lot of new, intriguing designs come across our desk lately. That word “intriguing” gets thrown around a lot because they catch our attention for a multitude of reasons. We can’t give you much more than that because these are entirely new products with zero range time from us. However, near the very top of that “new and intriguing” list is the Laugo Arms Alien pistol. 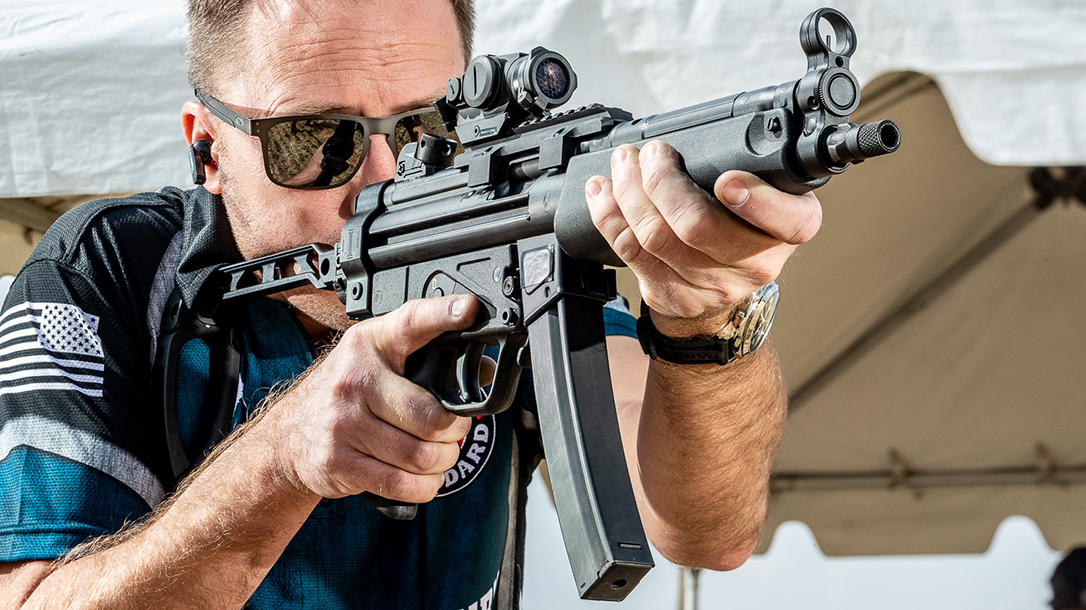 What We Know About the Laugo Arms Alien

First question: Why do they call it the Alien? Well, if you look at it, it very much resembles the Xenomorph from the 1979 film “Alien.” Look at the Laugo promo photo above as proof. We’re trying to get a production gun so we can film a promo of our own where the gun bursts through one of our editor’s chests. Kidding, but not really.

Laugo, a Czech-based manufacturer, designed the 9mm Alien pistol for competition. When it comes to competitive shooting, light recoil is obviously important; a low bore axis helps there. But Laugo took it one step further, claiming the Alien has the “lowest bore axis in the world.” According to Laugo, the Alien’s bore axis is located just 1.7mm under the axis of the shooter’s grip. “As a result, the pistol practically does not elevate after the shot and has almost flat recoil angle and no muzzle flip.”

Another interesting feature on the Alien is that Laugo permanently fixed barrel to the frame. “As a result, the barrel does not move during the fire cycle and can free float like on the sniper rifle. That altogether with precise manufacturing contributes to the exceptional accuracy of this firearm.”

Again, until we get one in our hands, this is all hearsay. Nothing says “proven” like a torture test, so we’ll reserve any and all judgements until we can pour about 10,000 rounds through one. Having said that, the prospects here are … intriguing.

Laugo Arms scheduled a limited-to-500 worldwide run for March 8, 2019. However, the manufacturer says availability is dependent on the import process and that U.S. availability will likely be delayed no later than July 2019.

Laugo says it is shipping its limited package as a fully equipped model with a range of accessories including:

The last tidbit we do know is that the Alien has an MSRP of approximately $5,000. We know sticker shock deters a lot of you from even considering certain guns, but let’s wait for the reviews before we say, “What are they thinking?!?”

Watch the video below from Laugo Arms and watch the pistol in action. For even more info, please visit LaugoArms.com.