by Jay Langston
in Culture, Lifestyle
0

War’s unifying effect to rally in the support of a common cause is nothing new. However, those “causes” stretch the imagination. The fruit of those wars are just as unimaginable when the bullets are flying. But their unintended consequences from the aftermath lead to some strange circumstances years, decades and even centuries later. When 60 retired American special operations veterans gathered in Central Texas April 2, 2016, to wage a two-day battle against the Lone Star State’s feral hog population, they helped remedy a problem that stemmed from the Mexican- American War more than 170 years ago.

The feral hog population in Texas has long since passed the epidemic level, with a population estimated at 2 million and climbing. A trip back in time to the 1840s and Texas’ battle for independence from Mexico created the foundation for today’s wild hog epidemic.

When General Santa Anna marched into Texas, the inhabitants fled in all directions. Some took refuge in America and others in Mexico. What they left behind was their livestock, many in the form of domestic pigs. These feral hogs only made matters worse, seeing that early Spanish explorers had introduced hogs to Texas more than 300 years ago, and the normal practice was to allow the stock to range freely. Left to their own devices, these porcine survivalists thrived and expanded their populations.

Then, in the 1930s, Texas landowners introduced “Russian boars” or European wild hogs in scattered locations for hunting purposes. These “razorbacks” quickly interbred with the feral hogs, setting the stage for these living weapons of mass destruction. Feral hogs are unprotected, exotic, non-game animals. Therefore, they may be taken by any means or methods at any time of year. There are no seasons or bag limits, however a hunting license and landowner permission are required to hunt them.

Enter Cedar Ridge Aviation, a company that oversees animal damage control on more than 800,000 acres near Knox City, Texas. And this is where Cedar Ridge’s owner, Dustin Johnson, coordinated a massive air assault on the feral hog population with the help of retired special operations veterans. Now in its third year, Semper Gratus, Inc., a 501(c)(3) non-profit, has turned this bacon blowout into an annual fundraising event for wounded warriors and other worthy military-related projects. 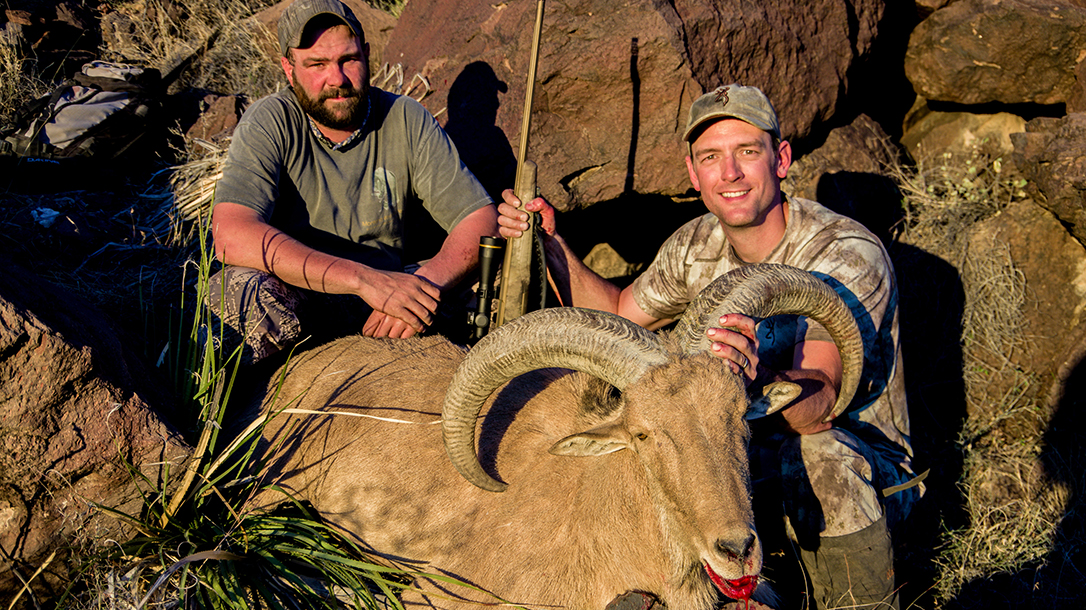 Hunting feral hogs from helicopters in Texas has spawned a growing niche market. However, taking care of business in this manner presents some challenging shooting scenarios. When asked about the quality of the gunners that went up during the three-day event, Johnson said, “These guys were the real deal. Several people who went up were former Green Berets, and they could shoot. I had one guy who emptied his AR-15, pulled out his pistol and killed three hogs with headshots from his pistol.”

To intensify the hog-eradication efforts and sell as many opportunities for fundraising purposes, Johnson augmented his flight time in his own Robinson R44 helicopter by hiring three more R44s and an MD 500 “Loach” from other aviation companies with experience in aerial animal control. This allowed Johnson to accommodate 10 shooters per hour.

At the end of the three-day mission, Semper Gratus supporters had flown 90 sorties and killed an impressive number of hogs—1,058 to be exact. A little rough math tells us that about 25 tons of pork hit the ground. Oftentimes, pork from these animal-control efforts gets processed and donated to local food charities.

The frenzied pace of the Semper Gratus bacon blowout is well above the norm for Cedar Ridge Aviation. Typically, Johnson sells a hunt for $1,350 per person. The price includes two hours of flight, one night at his lodge and three meals with drinks. Additional flight time is $600 per hour.

As mentioned, Cedar Ridge Aviation flies a Robinson R44 helicopter, which is a four-seat aircraft. Even though the airframe can accommodate three shooters and a pilot, two shooters is the best scenario for a quality experience. The pilot is seated in the front right seat, which allows a front-seat gunner on the left. The second-best gunner position is behind the pilot, covering the right side of the aircraft.

Cedar Ridge Aviation patrols a hog- and coyote-rich 1,250-square-mile area approximately 80 miles north of Abilene, Texas. When you fly with Johnson, you’re flying with a pioneer of today’s feral-hog-control methods. He helped write the Texas legislation that legalized the use of helicopters to control wild hogs.

Prior to the relaxation of aerial gunning laws, about the only animal damage control allowed was shooting coyotes in areas the Texas Parks & Wildlife Department had deemed as specific locations where whitetail and mule deer populations had been ravaged by predation.

I have personally seen the evidence numerous times where, left unchecked, coyotes can wipe out fawn crops year after year, leading to a total collapse in deer populations. Equally destructive, feral hogs can catch and eat young wildlife and decimate agricultural crops, causing millions of dollars in damage in a year’s time.

If you want to take part in a unique gunning experience and play a part in the war on hogs in Texas, check out Cedar Ridge Aviation. It will be one of the most fun experiences you can have with your clothes on.

This article was originally published in spring 2017 issue of “Ballistic” magazine. To subscribe, visit outdoorgroupstore.com.