by Garrett Lucas
in Guns, Rifles
0

Although this land is still the United States, the landscape is vastly different than what our grandfathers and great-grandfathers saw as they brought this nation to the world stage in the 20th century. The ever-shifting sands of public sentiment and the loss of our society’s comprehension of and faith in our Constitution should give each of us pause. We should consider what’s important in our lives and be ready to face whatever comes our way with courage and resolve. Whether it’s a foreign threat or a peril from within, each person should be capable of protecting themselves, their loved ones and their rights to property. which the labors of a finite life and time allowed each of us to have. Essentially, I’m talking about insurance, and to be more specific, I’m speaking of insurance in the form of Century Arms’ new 7.62x39mm C39v2.

The Century Arms C39v2 is a 100-percent American-made AK rifle that offers a load of premium features for a modest price. As most gun enthusiasts know, the standard AK platform is known for its simple operation and takedown process for cleaning, as well as its exceptional reliability. Century Arms started with those platform advantages and built in a suite of extras that makes this a standout rifle.

First, the C39v2’s receiver is milled from a block of 4140 ordnance steel, whereas most AK receivers (AKMs) are stamped into a sheet of steel. The milled receiver makes the C39v2 more durable, stiffer and arguably more accurate partly because of the increased stiffness. This is a rifle that can hold up to generations of use.

The next most striking attribute of the C39v2, at least for me, is the exceptional trigger pull. Unlike standard AKs, with their heavy triggers that almost fight back, the C39v2’s trigger has a smooth pull, and the sample I tested broke at an easy 4.25 pounds. What a marvel.

There are a couple of differences between the C39v2 and Century Arms’ original C39. First, it uses a standard AKM stock tang to make swapping out AKM-standard stocks possible. The original did not allow for that interchangeability. Another enhancement is Century’s proprietary side rail, which offers greater surface-to-surface mating and is claimed by Century to be four times stronger than the typical AK rail. It’s also designed to offer a return to zero if the mount is taken off and then reinstalled. This is not the case with standard AK side rails.

The barrel is chrome lined and has a nitride finish that improves its overall aesthetics while making it more corrosion resistant. The barrel comes with a 1-in-10-inch twist rate and left-hand 14×1 metric threads to attach other muzzle brakes and devices.

Additionally, although the receiver is milled, the C39v2 comes with a standard AK floating nut, making the grips interchangeable with other standard AKM grips. This was a nice benefit with the addition of one important accessory. We’ll get to that in a moment. 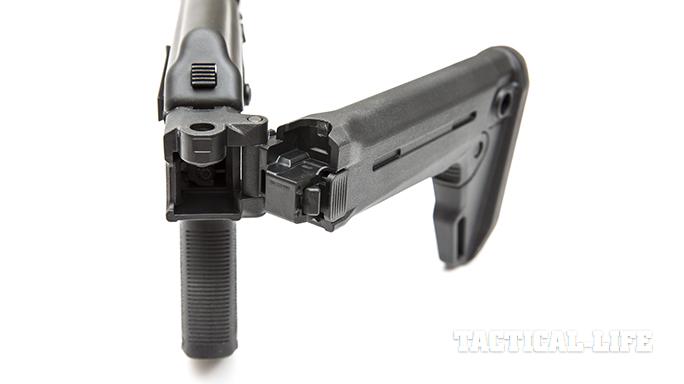 The C39v2 I received had Magpul’s Zhukov-S furniture installed. This includes a long forend with several M-LOK attachment points, a durable folding stock and Magpul’s Zhukov-S grip. This arrangement is a great for handling and shooting an AK-style rifle. For an add-on, I reached out to Crimson Trace to try out its new LiNQ system for AKs. The LiNQ for the AR platform has been out a while, but the AK version is just getting to market.

The LiNQ consists of a laser/light module mounted under the forend via Picatinny rail—made possible by the Zhukov-S forend and M-LOK rail. Then, the Crimson Trace grip unit replaces the one from the factory to make instinctive, remote wireless activation of the laser/light easy. Rather than have wires and tape all over the rifle, Crimson Trace simplified the process and made the system wireless.

Crimson Trace does not recommend using the AK LiNQ with milled receivers because manufacturers drill the hole in different places to attach the grip, and they are not interchangeable with AKM grips. Because of Century Arms’ choice to use a standard floating-nut attachment system, the LiNQ fit beautifully on the milled receiver of the C39v2.

Standard AK sights are not the best, and for people new to the game, it’s difficult to get a great sight picture. This is where the Crimson Trace LiNQ fills the void, especially at close distances. Once the green laser is sighted in at the proper distance, it can act as an aid to getting a good shot. It is especially helpful to have the LiNQ turned on while firing the C39v2 with the Zhukov-S stock folded. Yes, you should always be proficient at using your weapon, but a little extra help doesn’t hurt.

In that vein, the sample I received also came with a Red Army Standard optic mount with a top plate designed to accept Aimpoint Micro mounting-screw patterns like you might find on certain Holosun models and Aimpoint’s T1 and H1. Fortunately, I had Vortex Optics’ SPARC II on hand, and it fit the top plate perfectly for testing the C39v2. Currently, that’s the only top plate available for the Red Army Standard mount, but plans are in the works to offer more mounting solutions for various optics.

Dial In For Doomsday 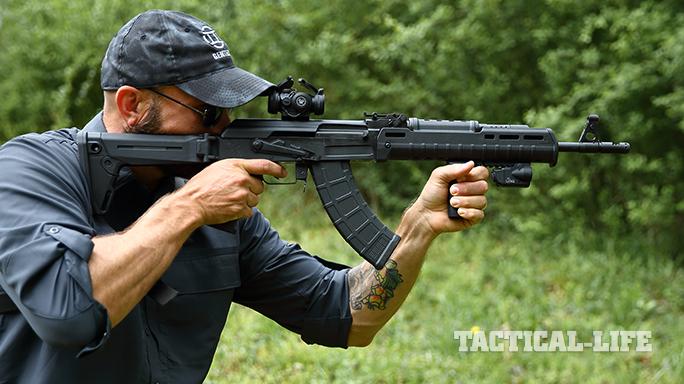 With the Vortex SPARC II mounted, I figured it was time for some accuracy testing. Because I was using a non-magnified optic, protocol called for me to test the rifle at 50 yards. Even without that protocol in place, there was no real way to attach a scope because only one top plate is currently available for the Red Army Standard mount.

The SPARC II has a 2-MOA red dot, so the dot covers just 1 inch at 50 yards. I did the shooting off a bag rest with three types of ammunition, and the C39v2 performed quite well. I fired 122-grain Red Army Standard FMJs and 123-grain MFS and Wolf Military Classic FMJs. All told, I shot 560 rounds, and all of the brands fed without fail, with no failures to eject or other malfunctions. Of course, that’s generally to be expected with a quality AK rifle.

The rifle’s accuracy was just as impressive. The best group was 1.13 inches at 50 yards with the Red Army Standard load. That brand also took the ribbon for the best average group size at just 1.23 inches. Considering there was no magnification and the 1-inch minimum coverage of the SPARC II’s red dot at 50 yards, I could not expect the rifle to do any better. 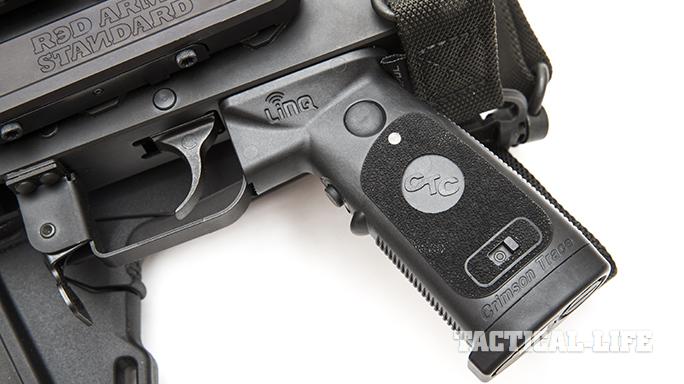 Aside from the higher-quality parts than typical AKs, along with the greater configurability of a milled-receiver rifle, there are other advantages of having this type of weapon system for when things go sideways.

The first is ammunition. Although AKs are generally perceived as not being as accurate at long distance as other rifles (see the test results), in a defensive situation against an aggressor, whatever happens will likely be at fairly close quarters. It’s improbable that a lone person or a family of four will be sniping threats 200 to 500 yards out. If they’re that far away, they need to run and put more distance between them and the threat.

On the flip side, though, there’s no question that the 7.62x39mm has more oomph behind it than the 5.56x45mm, making it a more effective stopper—especially out to longer distances. Plus, consider economics. There are several high-quality brands of 7.62x39mm ammunition available for about $225 per 1,000 rounds. And I’m not talking about that ultra-cheap stuff on the bottom shelf at your local gun dealer’s shop.

The Red Army Standard ammunition I shot for this review impressed me with its reliability and accuracy, and it’s currently being made—it’s not surplus ammo that’s been laying around. For those into prepping and long-term storage, quality brands such as Golden Tiger and Barnaul are especially good in this regard because those ammo manufacturers are producing rounds that still have sealed primers and lacquered cases to keep out moisture.

The availability of 7.62x39mm ammunition is a definite bonus. You can find it anywhere that sells ammunition, and even the dirt-cheap stuff will still feed reliably through the C39v2, though it might not share the enhanced accuracy of the premium loads.

Another argument for the C39v2 is the quality and the price point of the rifle. With an MSRP of just $1,120 (with Magpul furniture), the C39v2 is a steal. It has a better trigger than any other production AK on the market I have tried, including much higher-priced models. The milled receiver adds strength and durability, and the precision and reliability of the rifle easily exceed expectations for a weapon of this sort. 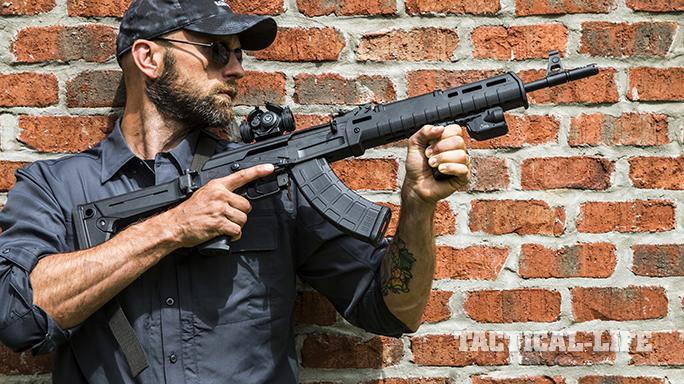 If we knew ahead of time when we would get into a car wreck or have a house fire, we would only need to carry insurance on those specific days. But that’s not how the world works. You need to be ready at any moment. The same thought process is involved in protecting your family against the many threats that exist. And from what we’ve seen on the news, just about anything is possible.

With its robust build quality, excellent machining, clean lines and professional finish, the C39v2 is a tremendous value and an outstanding AK rifle, period. Its ease of operation, configurability, accuracy and unfailing reliability makes it an ideal choice for the apocalypse or whatever else might occur.

Being on the C39v2 insurance plan is an advantage for you and your family. It will be there when you need it and will serve you well. With the right accessories and high-quality ammunition, it’s good medicine for the bad days ahead.