These Ballistic “Custom Challenges” are among my favorite things to cover. I’m a sucker for badass custom guns—especially when custom shops around the country are pushed to the limits to turn their guns into absolute masterpieces. We decided to reach out to Magnum Research for this larger-than-life “Custom Challenge.” 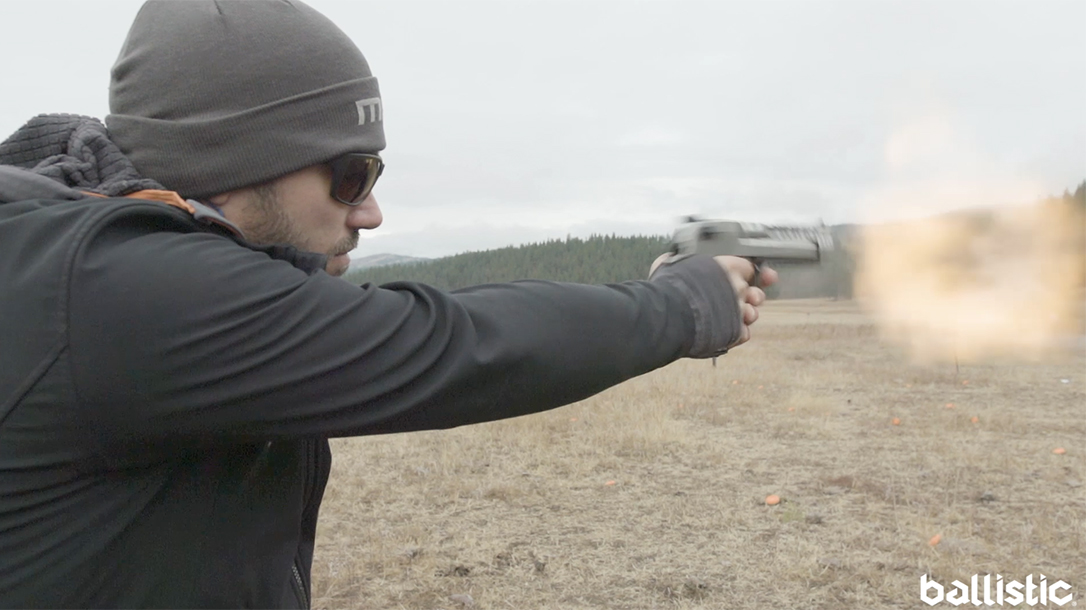 Magnum Research sent out two massive, bone-stock, .50-caliber Desert Eagles. What better way to see what custom shops can really do but by giving them a whole lot of gun on which to showcase their skills? Everyone knows what a Desert Eagle is, so I won’t bore you with the details. Let’s get right to these incredible works of art that came out of Outlaw Ordnance and Dark Alliance Customs.

With the large amount of steel real estate on the 4.5-pound Desert Eagles, we decided to let the shops determine the theme. Consequently, Chip “Cheeto” Pierce from Outlaw Ordnance and Jeremy Schmierer from Dark Alliance Firearms collaborated and determined the perfect theme and finish. They chose America as the theme and went with polished finishes. Then they went to work creating some of the most amazing American-made Desert Eagles I have ever seen.

“Our design team put together this badass American theme,” Pierce said. “We knew from our years in the industry and from our previous American-themed builds that the normal approach is the flag, statue of liberty, ‘Don’t Tread On Me’ and ‘United We Stand’ themes. We wanted the firearm to scream ‘America,’ but not walk through those same footprints. Our whole team put our heads together and decided on an America timeline that highlighted pivotal moments in history.”

In the end, Outlaw Ordnance touched on Native Americans, settlers, the Constitution, the Pledge of Allegiance, wars, baseball, Elvis, Martin Luther King Jr. and much more. “The gun possesses a quality of continuous discovery. Every time you see it, you see something new,” Pierce said.

Outlaw Ordnance took that design and brought it to life starting in the CNC department to remove all of the factory serrations and shape the barrel a bit. After they achieved a completely blank canvas, the gun then underwent an insane amount of laser therapy. Deep engraving was done on pretty much every square inch of the pistol. Outlaw Ordnance also added a set of aluminum Hogue grips that were transformed into works of art in the laser department. “With the use of our Control Laser machines, anything is possible,” Pierce said. “If you can imagine it, we can do it on these lasers.”

The gun then went to the paint department, where they applied an Armor Black Cerakote finish to the pistol and grips. Next, the Outlaw Ordnance team sanded and polished the exterior of the gun, sent it to assembly, and test-fired it.

When I first received the Outlaw Ordnance Desert Eagle, I just stood there and stared at it for a while. It was like holding a rare piece of art. I almost felt bad for touching it because it was so beautiful, and the highly polished finish was absolutely perfect. I finally pulled my jaw up off the ground and wiped the drool marks off the gun.

Dark Alliance Firearms is well known in the industry for its dark-themed builds and is led by Jeremy Schmierer, the owner and mastermind behind it all. Schmierer isn’t a professional shooter, wasn’t in the military and has no formal training. He’s just a guy who loves firearms and got sick of paying people to do stuff that he knew he could do better. Dark Alliance’s craftsmen show that “We can do that better” attitude in every firearm they create and customize.

“We’re all artists,” Schmierer said. “If you’re part of the Dark Alliance team, it’s for a reason. Everyone on our team has to share the same artist mindset. We have a very tight group of friends that all add to what people see as the final end product. We all push each other, and sometimes that ends in arguments. But we’re all family. We get over it and end up happy that we pushed each other to get to the next level. You can’t just be happy with your current build or your work will never evolve.”

The resulting Desert Eagle is exquisite. The Dark Alliance team surprised me a bit when I opened the box. I was really expecting the usual incredible Cerakote, custom work and leather accents for which the company is so well known. Instead, they took a direct route of very detailed laser engraving, polishing and otherwise keeping the Desert Eagle stock. Well, kind of.

While taking photos of the guns, I noticed that Dark Alliance installed the front sight on its build backwards. It looked weird in the photos since the other gun’s sight was installed properly, so I took it to Odin’s Workshop, a local company, and had it switched back. I did all this before talking to Schmierer. Once I finally reached Schmierer, however, he made it very clear that he had installed the sight backwards on purpose.

“It’s an inside joke between us, Magnum Research and the Outlaw boys. I’ve always said it goes better with the lines of the gun that way, so I even engraved an arrow on the top showing the direction I think it should go.”

Dark Alliance is known for the incredible detail packed into its builds. Although the craftsmen there kept it simple as far as the methods used for the design, the gun is still packed with all the details for which they are famous. The “Don’t Tread On Me” theme is like no other I have seen come out of any custom shop. It’s kind of a Wild-West-meets-modern-America piece of never-ending eye candy that draws you in as you keep finding new, extremely small details strategically placed all over the gun. Schmierer told me that he has always loved the artistic value of paisley prints worn by Wild West outlaws, but paisley doesn’t exactly scream patriotic. What better way to make paisley patriotic than with the addition of the Gadsden flag theme mixed with that Western paisley design.

“I started drawing up my own paisley design that I like to call my patriotic paisley,” Schmierer said. “When you look at the details, there is all that good stuff mixed in throughout the whole design. The tiny details are nice, but the Desert Eagle is so big I had to put the big rattlesnake with the ‘DTOM’ on there to really bring it all together.”

The design has a final count of 148,824 draw points and close to 100 hours in just the draw time alone. I am no expert on laser engraving, but I am pretty sure that means the gun has had a helluva lot of blood, sweat and tears put into it.

Enter here if you are having trouble entering on the form above.

These two incredible custom shops weren’t given any boundaries, yet they proved that it’s possible to take a badass gun and make it even better without a crazy paint job or extra accessories. For a chance to win these beauties, enter below. Then visit magnumresearch.com for more info on the base gun, and outlawordnance.com and darkalliancefirearms.com to see more amazing work from these top-notch firearm artists. You’ll definitely be impressed.

This article is from the February/March 2020 issue of Ballistic Magazine. Grab physical and digital copies at OutdoorGroupsStore.com.