For those interested in entering, scroll right to the bottom. But just know you’re missing the story on what you could win and it’s a good one.

Taking a passion and turning it into a career is an art in itself. Nakia “Nacho” Jackson and his partner in crime, Chip “Cheeto” Pierce, know that struggle all too well. But when that struggle pays off, the rewards make it all worthwhile. The crazy-long hours, blood, sweat and tears show in every functional piece of artwork that these masterminds at Outlaw Ordnance create. 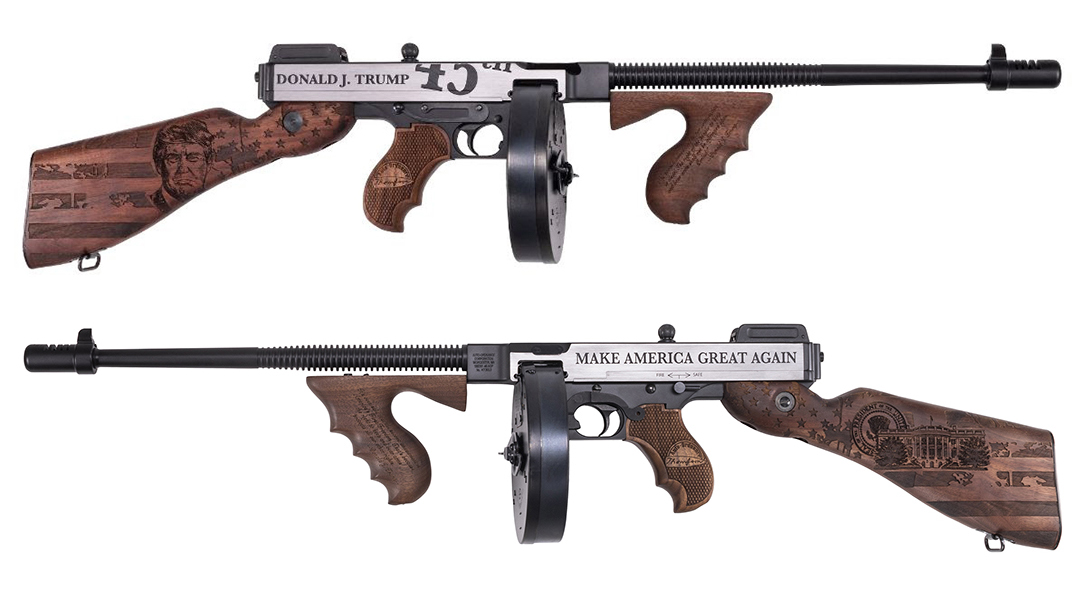 That’s why we decided to reach out to Nacho and Cheeto about this epic “Custom Challenge.” We wanted to create a special “Presidential Thompson” in honor of Donald J. Trump for the cover of Ballistic, but Auto-Ordnance and Outlaw Ordnance took it a step further. They said, “Hell, let’s do a limited run of 25 of these guns. Ballistic magazine can give No. 1 away to one lucky reader!”

The rest is history. I was lucky enough to speak with the patriotic geniuses behind this custom Trump Tommy Gun and take a peek into their minds.

Who is the mastermind behind Outlaw Ordnance builds?

Nacho: I am the president, and Cheeto is the senior vice president of the company. We work together to produce these works of art. As the company has grown, it has been necessary to build a remarkable team to distribute the responsibilities. We currently have 30 of the best employees on the planet. Jennifer “JJ” Jackson, my beautiful wife, is a full-time part of the day-to-day operations at the shop. She acts as the company vice president and keeps Cheeto and myself free to get creative. Cheeto, JJ and I have been an unstoppable team since the beginning.

Cheeto: We really are just two country boys who would prefer to go hunting or fishing. However, the long hours and sacrifices are necessary to accomplish the American Dream. We’re making a mark on this Earth that will be remembered through many generations and leaving our children a legacy to be proud of. We’re doing what we can to protect the Constitution, prevent tyranny, protect our wildlife, and honor our veterans, law enforcement, EMS and first responders. That is why we build and donate so many guns each year to be auctioned and raffled for various charities and organizations. That is also why we were so excited about this “Ballistic Presidential Thompson” project.

What inspired you guys to come up with the idea for the design?

Nacho: When you guys approached us and said, “We want to give a very special gift to one of our subscribers,” we were immediately excited. This is a project we have been planning for some time now anyway. What better people to partner with on this project than Ballistic and Auto-Ordnance? Both of us personally are extremely proud of President Donald Trump. He might not always use the right words or make the exact decisions we would make. However, we do believe he always has the best interest of this great country in mind. We believe he loves this country as much as we do. And we believe he is making America great again. He has done an amazing job throughout his career, not only in business, but also in his family life. He has raised an amazing family and surrounded himself with powerful, wise, God-fearing people.

Cheeto: That’s why we wanted to take on this build, and we didn’t want to stop at just one gun. We wanted to honor his legacy and the legacy of the entire Trump family with this build.

How much time went into the design process?

Nacho: We have a team of designers that work together in a round-table type of discussion before any builds gets started. We then have an overall direction, and the computer designers get started building individual graphics that will be used in the design, such as using photographs of each family member from the internet to draw line images and preparing these images to be engraved. This process usually takes 30 to 45 days to complete before artwork is ready to send to the machining department. However, when Ballistic says, “We want to give this gun away in 30 days,” our team has to make it happen. So, on this particular project, late nights and gallons of coffee cut the design time down to 10 days. That amounted to about 500 hours of combined time with three guys.

Then how long does it take to actually build one of these guns?

Nacho: Each of the approximate 90 separate images have to be put together like puzzle pieces. This firearm has to go from a four-
axis-controlled laser CNC machine to a robotic fiber laser with a rotator, to a CO2 laser to engrave the wood furniture. The total time in the machining department is about 40 hours. The gun is then degreased, sandblasted and prepped before being Cerakoted. Then it’s polished and sent back to the paint department to receive its final clear coat to protect the finish for many years so the gun can be passed through many generations. The gun finally makes its way to assembly, where final adjustments and test firing are completed. The total time for the build is about 80 hours.

Cheeto: This project is very special to us, just as we know it is special to the team at Ballistic. Doing a small, limited run builds value and makes each one mean so much more to the owner. For this reason, we have decided to produce only 25 of this design, making it a rare, sought-after gem.

How will these guns be available?

Nacho: These guns will be distributed by Auto-Ordnance, the maker of the Thompson, so you’ll be able to find more information on Auto-Ordnance’s social media pages. Those interested in one of the 24 other custom builds can also send an email to marketing@kahr.com.

Cheeto: On the Outlaw Ordnance website, you’ll find a bunch of patriotic apparel as well as one-of-a-kind guns that that are currently up for sale. If you don’t frequent the page, you might miss out on the gun of a lifetime.

OK, before we go, where did your nicknames come from?

Nacho: Not long after Chip and I met, I started calling him “Cheeto.” It wasn’t long before he asked, “Why do you call me Cheeto?” I said, “Because you’re my favorite Chip!” Since that time, I have seen social media posts referring to Cheeto as “America’s Favorite Chip!”

Cheeto: I wish it had a cool story, but I starting calling Nakia “Nacho” because I felt he needed a weird nickname, too. It just kind of stuck.

Any predictions for the coming election?

Nacho: I know “We The People” will show the world once again that we are done with politicians. We won’t tolerate a tyrannical government or any infringement of our Second Amendment. Donald Trump will be president for a second term, and I hope Don Jr. runs in 2024, because we’re going to vote for him, too.

Grab your copy of the Ballistic April/May 2020 issue today at OutdoorGroupStore.com! 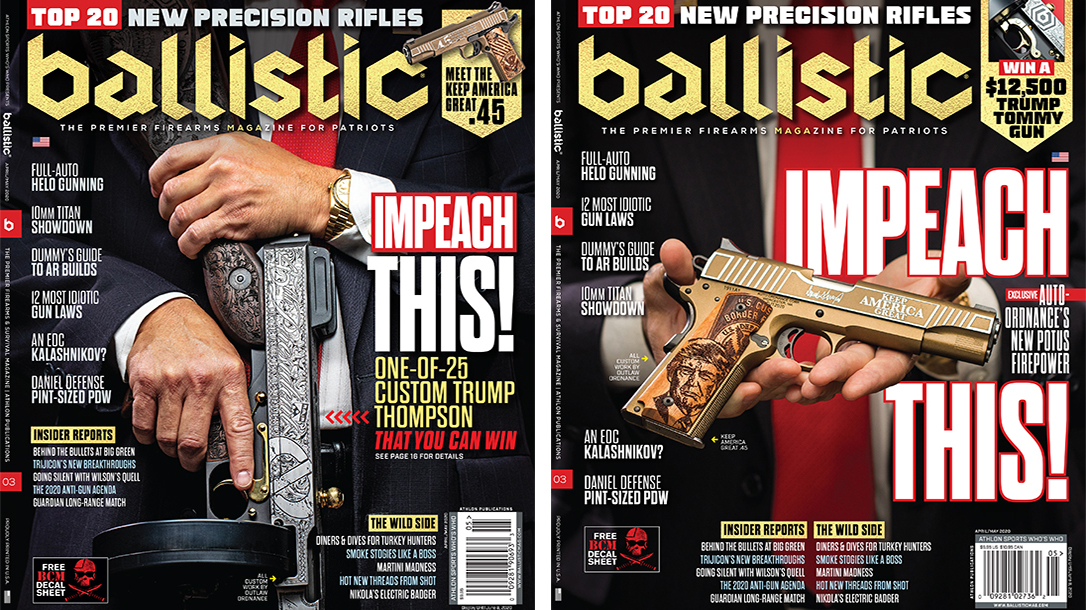 Learn more about the base gun by visiting auto-ordnance.com. To purchase one of the 24 other Ballistic Presidential Thompsons, email marketing@kahr.com. And for more on Outlaw Ordnance, visit outlawordnance.com.