Synergism can be defined as an interaction between two entities that creates a greater benefit than the sum of their individual selves. I had the opportunity to observe this recently in the firearms community with partnership between two well-established gunsmiths. Now a custom Gunsite Colt 1911 Series 70 exemplifies that synergism. 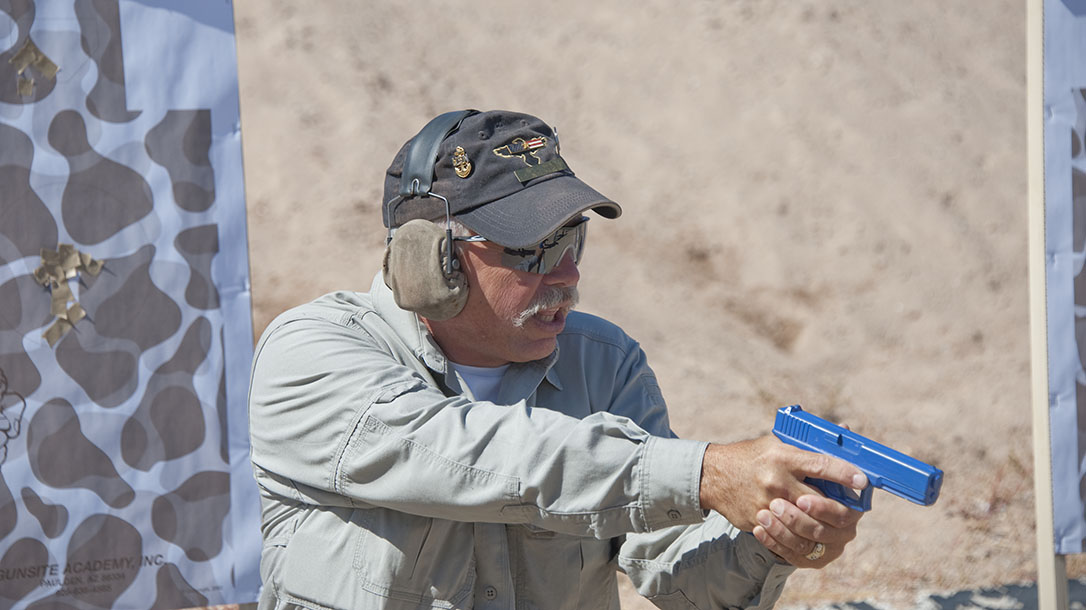 The first week of April I was invited to a small media gathering at Gunsite for the announcement of the new Gunsmithy concession. Ken Campbell, Gunsite’s Chief Executive Officer, started by saying, “We’re the best in the business in firearms training, and Dave Fink and Bobby Tyler are the two best gunsmiths we know. So, we’re happy to announce that Fink and Bobby’s company, Tyler Gun Works, will be taking over the gunsmithing concession at Gunsite. The Modern Technique has evolved and so has gunsmithing, and we think this collaboration will prove to be a valuable asset to the students we serve and the general shooting community as well. Gunsite has 45-plus years of success because of great instructors, and we wanted a Gunsmithy who shares our vision of excellence!”

Gunsite is the nation’s oldest and largest facility dedicated to training responsibly armed citizens and I have met some of the finest people I know on their ranges. There’s a long list of industry people I’ve been introduced to at Gunsite and now share a great working relationship with, but I’ve also developed deep and lasting friendships with those that share my values and ethos. Gunsite seems to be a great facilitator of introducing like-minded folks, and this was certainly the case with Bobby Tyler and Dave Fink.

Tyler, of Tyler Gun Works (tylergunworks.com), attended an event at Gunsite hosted by Rob Leahy and his company Simply Rugged Leather(simplyrugged.com). Among other invitees was a local gunsmith who had just hung out his shingle. Dave Fink is a Navy veteran who attended Yavapai college to learn the gunsmithing trade and then apprenticed at a shop specializing in bluing. Fink had just opened his own shop when he met Tyler. Reflecting on that first meeting Tyler said, “I saw an opportunity where Dave did not because I saw an opportunity in Dave! The potential of what Dave could bring to this venture on a long-term scale is tremendous. You can teach people how to do things, but you can’t teach character. Without character you have nothing!”

Acknowledging the compliment with a nod and a bit of a blush, Fink said, “Our main goal is to support the students here at Gunsite. Our Gunsmithy shop is right on Gunsite’s campus and easily accessible to students. Down the road the customer whose extractor we fixed may be the one who we build a custom 1911 for with color casing by Tyler Gun Works. Our strong suit is our machining capability, and it will also be a great asset for Bobby. We’re bringing in our mill and lathe to the new location here at Gunsite. It’s not so much what the machines are capable of as what the machinists are capable of. Lately, we’ve been doing loads of RMR slide cuts manually; we must have already done 50 of those for Gunsite, between the students and instructors.”

Three days before this mini event Tyler had brought a four-man work crew from his headquarters in Friona, Texas, to completely gut, rewire and paint the shop and help move in Fink’s machinery. The collaboration between Fink and Tyler is more than just an endorsement—it’s a healthy business decision. Having a second machine shop will certainly expand Tyler Gun Work’s capacity while also growing Fink’s Custom Gunsmithing.

Fink already has two highly trained machinists on staff and will add others as necessary. The layout of his shop can easily be expanded. While the Gunsmithy shop is located on Gunsite’s grounds it is independently owned and operated. Fink will maintain his original trade name, Fink’s Custom Gunsmithing, and website (finksguns.com).

“The potential for growth here at Gunsite is tremendous,” said Tyler. “I see Gunsite as an opportunity to reach a different clientele. We’ve built custom guns for just about all of Gunsite’s instructors and staff. It’s fun playing the gentlemen’s game with other gentlemen and, when you look at it like that, you just can’t go wrong!”

It has been my privilege to examine guns customized by both Tyler and Fink. Ken Campbell and Gunsite instructors Ed Head and Lew Gosnell have all had custom guns made by both smiths. In fact, for this event I brought along five different revolvers for show-and-tell. Last year Tyler took an old 3-screw Ruger and did a Number 5 conversion on it. New grip frame, sights and color casing make this old gun a thing of beauty, and the .44 Special shoots like a house-a-fire! Fink’s first work for me involved taking an old, pitted Colt Officers Match revolver with a 7.5-inch barrel and cutting it down to 3.5 inches, fabricating a new rear sight and Parkerizing the gun.

I was so delighted with the finished revolver that I gave him two S&W M19s and a M13 for my next project. The two M19s were fitted with 3-inch Python barrels cut from a single 8-inch Python barrel. Fink then fit the M13 with a M19 barrel, cut to 3 inches also. You’d swear that all three guns left the factory in those configurations. Fink was able to look at my rough drawings and notes and create my dream guns, which had previously only existed in the dark corners of my mind.

I first met Bobby Tyler three years ago at a Shootist Holiday and was immediately impressed with his work. He’s a great gunsmith, but he’s an even better person. In fact, in a box that contains my will and other legal documents is a Tyler Gun Works business card along with instructions to call Bobby upon my demise and allow him to liquidate my collection. There are few people in this world who have earned that type of trust from me.

Fink is another. I met him at the same time Bobby Tyler did, again, at Gunsite. He’s as unassuming as they come and lets his work speak for itself. He’s unafraid and unashamed to speak of his faith and looks with adoration at his wife, Rachel, and darling little girl, Abigail. Like Tyler, his handshake seals a deal better than any $300-an-hour lawyer. These are the kind of folks I prefer to do business with, and it thrilled me to no end when I heard they’d be working together!

To commemorate this happy business venture, Fink and Tyler both worked on a Colt 1911 Series 70 pistol to give away to one lucky Ballistic reader. Using the pistol as a blank canvas, the two smiths created a unique masterpiece that is bound to be the centerpiece of any collection. But it’s not just a one-of-a kind work of art, it is a completely reliable gun worthy of the Gunsite Raven!

Media members at this event were treated to a modified Gunsite 150, two-day class, which focuses on the fundamentals of weapon presentation, speed and tactical reloads and clearing malfunctions. We shot on the square ranges as well as the shoot houses and Scrambler field course. The give-away Colt was passed between writers along with the Simply Rugged holster and it was run hard with DoubleTap’s 230-grain range ammunition as well as frangible ammo for the shoot houses. In two days of hard use without cleaning, the Colt never bobbled.

“We didn’t do any modifications to the gun that will prevent it from being shipped to any of the 50 states,” Tyler said. “We left it pretty much stock, but you know us.” Tyler continued: “We went through it thoroughly and removed the small burs and made some corrections where needed. Ken Campbell gave us permission to include the Gunsite Raven logo, and our engraver also embellished it with some tasteful scroll work. Our calling card is our color case work and I’m very happy with the way the frame turned out. We used our Colt-style deep blue for the slide, and it complements the frame nicely, as do the stag grips!

“I asked Rob Leahy of Simply Rugged holsters to build us something appropriate to carry the Colt in and he didn’t disappoint us. The winner of this gun will also receive the beautiful Simply Rugged elephant-hide holster, as well as a Gunsite challenge coin. Total value of this package is $3,500. If you have a family heirloom that needs restoration or if you’d like to create something special to pass on to your heirs, Tyler Gun Works and Finks Custom Gunsmithing should be at the top of your list!