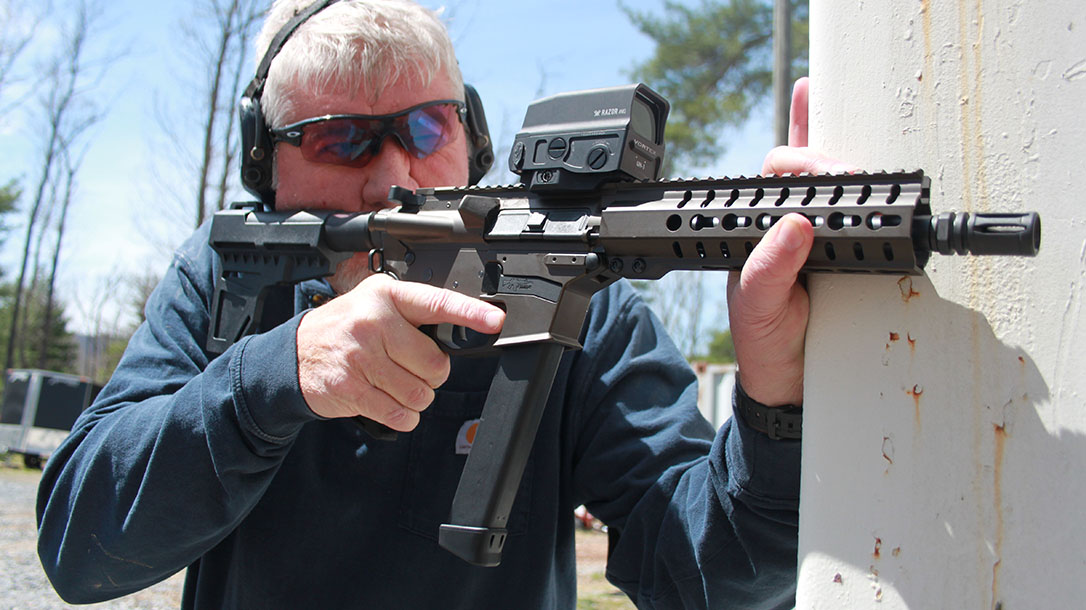 The urge to capitalize on AR modularity, firepower, ergonomics, and accuracy potential with cartridges other than 5.56mm cartridge always appealed to the shooting community. CMMG was an early soothsayer that tapped into this sentiment. Models and conﬁgurations have grown signiﬁcantly since 2002. CMMG wanted to simplify the identiﬁcation and selection process. In 2019, CMMG decided to bring its braced pistol and SBR models under one product heading: The CMMG Banshee. The company also consolidated its earlier introductions, such as the Mutant and MkG Guard, into the specialized Banshee lineup.

In total, CMMG currently offers 10 different calibers from .22 LR to .458 SOCOM, with many stops in between. CMMG also separated various barrel lengths and accessories/furniture levels into 100, 200, and 300 Series models. Exact configuration in each CMMG Series depends on the chosen caliber.

With the 100 Series Banshees, you’ll ﬁnd classic furniture appointments like the A2 pistol grip and A2 Birdcage ﬂash hider. The 100 Series pistols receive no brace on the buffer tube. Meanwhile, CMMG outfitted its 200 Series with upgraded furniture choices like Magpul’s MOE pistol grip, CMMG’s RipBrace, and CMMG’s single-chamber SV muzzle brake. But the gold standard of the Banshee lineup is the 300 Series. Highlighting the 300 Series is the option to choose from 10 different Cerakote colors. CMMG also laser engraved the specific Banshee model name onto the lower receiver. Ambidextrous controls, charging handle, sling points, premium trigger, Magpul pistol grip, CMMG’s RipBrace, and CMMG’s SV muzzle brake are a sample of possible upgrades. All 300 Series firearms are the shortest configuration CMMG offers in their respective calibers.

A classification of weapons that can be no longer ignored is the braced pistol. The number of pistol models stemming from what was typically associated with rifle-pattern weapons has exploded in recent years. Every major manufacturer now seems to offer a pistol variant of its rifle models. CMMG tapped into the positive market sentiment early on. It lead the way with multiple caliber options and configurations related to braced pistols centered on AR-like weapon patterns.

AR-type pistols dominate the brace pistol genre. Why? Well, not only because of the overall popularity of the AR in the U.S., but also the way the AR buffer tube interacts with the user. Early AR pistols relied on the buffer tube for user interface. People forget that the plethora of brace options were not present initially. The CMMG 100 Series models are examples of non-brace, buffer tube-only configurations. The whole trend exploded with the arrival of braces, with the buffer tube providing an ideal, natural mounting point.

For individuals that have no legal access to a NFA Class 3 Short Barrel Rifle (SBR), the brace stabilized pistol is likely the closest they can get to achieving rifle-like firepower in such compact packages. Along these same lines, the expansion of states issuing concealed carry permits, plus other states honoring these permits, is another reason why braced pistols are currently so popular. The ability to maintain handgun status with a semblance of SBR rifle performance is tough to resist. The legal classification as a handgun offers users who have a concealed carry license a certain amount of flexibility compared to a true rifle or NFA SBR classified weapon.

I jumped on the CMMG wagon early. I used platforms such as the Mk47 7.62×39, Mk9 9mm, MkG .45 ACP, MkW ANVIL .458 SOCOM and Mk10 10mm. Don’t think that CMMG only adapts existing technology or merely assembles parts. CMMG innovation is the key to its success. Two great examples of this are present in its Banshee Mk10 and Mk47 offerings.

The Banshee Mk10 10mm is not merely a modified or upscaled 9mm AR-pattern weapon chambered in 10mm using the customary blowback operating method. CMMG incorporated its patent pending Radial Delayed Blowback (RDB) operating system. The reward to the user is a 10mm AR pistol-caliber platform that’s not only lighter overall, but also offers reduced recoil compared to traditional blowback; this is because the typical SMG blowback operates with a heavy bolt mass slamming back and forth. The CMMG RDB does away with this.

The CMMG RDB rotates and unlocks (a la the AR-15) before cycling to the rear as opposed to just moving rearward upon firing a round; this slows the bolt carrier group enough to allow pressure to subside before unlocking. What this translates to is less recoil and more controllability in rapid fire. Why? The nearly two pounds of metal mass associated with blowback operation is no longer recoiling rearward then slamming forward again. CMMG applies this same advantage to 5.7mm, 9mm, .40 S&W, .45 ACP Banshee chamberings.

The CMMG 300 Series Banshee 10mm pistol evaluated herein featured the CMMG RipBrace with a 6-position enhanced receiver extension, ambi sling attachment plate at the receiver, oversized ambi charging handle, and safety selector. The 8-inch, 1:16 twist 4140 barrel features a SV muzzle brake. The 7075-T6 billet lower and forged upper contributes to a weight of 5.9 pounds. Length of the Banshee 10mm is 24.1 inches with a collapsed RipBrace. A CMMG M-LOK forend matches up nicely with the flattop railed upper receiver. CMMG doesn’t include iron sights with the assumption being that the end user will install a red dot or optic. However, some sort of flip up sights would have been a nice touch offering a complete ready to go package straight out of the box.

CMMG wisely decided to utilize Glock-compatible magazines and not some proprietary feeding device with the Banshee. CMMG provides a SGM 30-round 10mm mag with the Banshee. It’s much appreciated as opposed to showing up with 15-round G20 magazine, which is a real letdown. Will the KRISS MAG EX2 kit work with the Banshee? Yes. It increases the 10mm capacity to 33 rounds.

The CMMG Banshee accommodates the Glock G20 magazines with a bolt catch linkage (patent pending); it locks the bolt rearward after the last round and releases simply by pushing an oversized released button. I found more attention to detail with the integrated oversized trigger guard and a flared magwell machined into the billet 7075 aluminum lower.

Then there’s the Banshee Mk47 7.62×39 receiver and bolt group. They are derived from CMMG’s Mk 3 series of 7.62x51mm/.308 Win rifles. CMMG describes this as a mid-sized AR receiver (0.75 inches shorter than an AR-10) and views its adaptation from the larger AR-10 receiver/bolt group as an important component of the Banshee Mk47’s reliability and durability. The CMMG Banshee MkW models chambered in .458 SOCOM and 6.5 Grendel also utilize this mid-size receiver. In lieu of trying to force an AR-15-sized receiver into accepting the 7.62×39 cartridge, CMMG decided to go with a scaled down AR-10 receiver to give the dimension tolerances required. This decision has important benefit.

The Mk47’s mid-size receiver allows CMMG to be one of the few—if not the only—AR manufacturers to accommodate a wide assortment of the natural feed mechanism for the 7.62×39. I’m, of course, talking about the AK-47 magazine, including drums. Early AR rifle attempts that utilized non-AK magazines were dead on arrival due. This is because they negated a major component of the 7.62×39 appeal: The reliable, widely available economical AK-47 magazine. This is an important consideration for any 7.62×39 connoisseur. The Banshee Mk47’s larger-than-typical AR-15 receiver offers plenty of room for the wider and longer feed lips of the AK magazine compared to an AR-15. The same can be said for the AR-10-type bolt carrier in terms of providing the necessary bolt momentum/velocity for reliable operation.

Since typical AK magazines do not have a follower to hold the bolt open after the last round is fired, CMMG eliminated the bolt catch mechanism on the Banshee Mk47; this eased design constraints associated with the magazine well area reconfiguration and alleviated the need to intrude into the trigger housing for space, thus enabling the use of AR-15 type triggers.  This approach further extends to the magazine release arrangement decided on by CMMG. CMMG installed a wider than normal AK paddle style lever in front of the trigger guard. This has dual benefit of giving user increased leverage when changing magazine and making the release ambidextrous.

Why the CMMG Banshee Reigns Supreme

The multi-positional CMMG RipBrace is the current epitome of the brace concept. Meanwhile, the Banshee is more potent and offers longer effective range than a traditional pistol, especially if trained to use effectively and appreciate its nuances. The CMMG RipBrace enables techniques of deployment that maximizes the Banshee’s potential. A favorite technique is floating the brace on the cheek, not shouldered, providing three points of contact for more stability and, thus, accuracy. This is not a newly discovered technique. There are reports from back in the Cold War of Czech Special Forces running their Skorpion machine pistols in a similar fashion. It was also used by early practitioners/advocates of AR pistols using only the buffer tube minus any brace. We have come a long way from this. Attentive training will pay dividends in finding what works best for individual users.

A weapon like the CMMG Banshee, no matter the caliber, has advantages in terms of handling, ease of concealability and increased portability; that combo is hard to resist when compared to a standard length rifle. The inherent familiarity most have with the AR platform, not to mention its ergonomics, validates CMMG’s decision to continue to enhance it via caliber expansion with the Banshee offerings. The appeal of a brace-equipped Banshee isn’t lost on me. For most, the intriguing nuance of maintaining handgun status with a semblance of AR performance based on manipulation techniques is perfection. For more information, please visit CMMGinc.com. 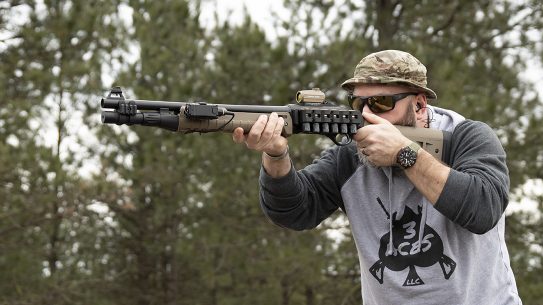 With help from Aridus Industries, Primary Arms, and Viridian Weapon Tech, we created the... 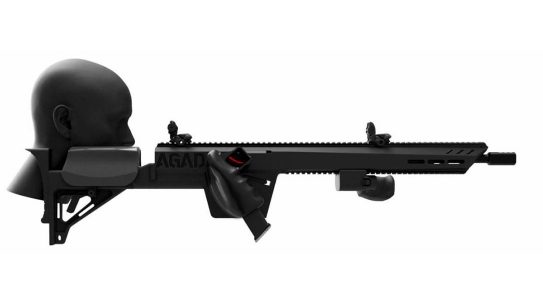 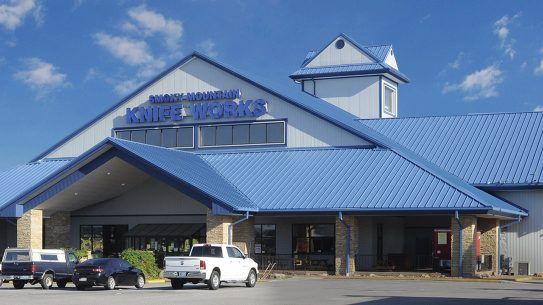 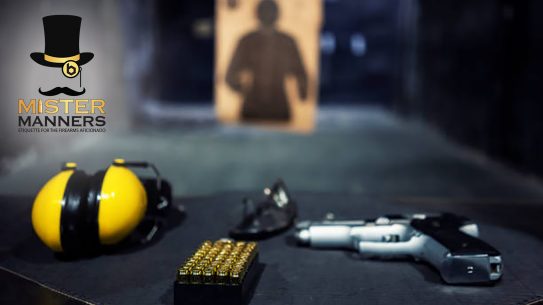 Just when you thought you had seen it all, CAA USA changes the game with their new AGADA PCC rifle. Meaning “Legend” in Hebrew, the AGADA gets its design cues from Mikey Hartman, bringing his years of IDF firearms instruction. The CAA AGADA PCC Rifle Available in both right- and left-hand variations, the AGADA will […]

Wrecking the Entire World: A How-To Guide in the Afghanistan...

Bond Arms Momma Bear and Girl Mini Allow You To...