by Peter Suciu
in Gear, Knives
0

0
SHARES
196
VIEWS
Share on FacebookShare on Twitter
While the club is generally considered to be the most universal weapon across human cultures — it requires little more than a stout piece of wood to be effective — one of the most prolific weapons remains the sword. The earliest examples of swords date to around 3300 BC. However, true swords as we know it were developed in the Bronze Age around 1700 BC.

Throughout the eons that followed the sword has been carried by conqueror and vanquished alike; it was a weapon of warriors, knights, samurai, gentlemen, soldiers, sailors and diplomats. While firearms largely relegated the sword to a ceremonial use, brave men wield tactical swords in combat well in the 20th Century.

American soldiers didn’t rely on swords in the Spanish-American War, but after acquiring the Philippines did face an insurrection from the native Moro peoples who carried a range of swords and other bladed weapons.

A decade later, officers across Europe carried swords in the early days of the First World War, while Japanese officers and NCOs (corporals and sergeants) showed their bravery by charging into action armed with the shin guntō — the modern equivalent of the classic katana. In fact, it became a symbol of rank and privilege in the Imperial Japanese Army from 1935 and 1945.

While many officers may have had “ancestral” family blades that were adapted for military use, the Japanese military actually produced a new range of shin guntō (meaning new military swords) blades at the Toyokawa Naval Arsenal. It is worth noting that these swords replaced the western style swords that the Japanese military had used in the early decades of the 20th century and featured a design evoked from the swords carried by the samurai.

At the time of introduction for these swords, the use of blades in combat was largely a thing of the past for most western armies. However, as the Japanese adopted its Code of Bushido the sword took on greater importance. Along with Japanese militarism, swords presented war as purifying and death as a duty — so to the Japanese soldier the sword took on a role as a tactical weapon.

The proverb from the Gospel of Matthew 26:52 has been interpreted as a call for Christian pacifism or complete nonviolence, but for centuries the sword was carried for personal defense. In less civilized times living meant living by the sword.

Today there are far more practical options than a sword for personal defense. In fact, in many communities it would be illegal to even consider carrying a sword openly — whether for defense or not. In other words, you shouldn’t carry swords for defense!

However, there is the still the issue whether a sword would ever be practical as a defensive weapon. The quick answer is probably not. Bringing a sword to a gun fight isn’t a good idea unless you’re living by a Bushido code that sees death as a duty. The modern world that doesn’t mean living by the sword.

Surviving With a Tactical Sword

Now if there was a breakdown in society, a sword suddenly has more practical uses. As noted by TV’s The Walking Dead, a katana can be an effective tactical weapon. Several companies market so-called Zombie Swords. These are usually a machete-sword hybrid with slight curve and partially serrated edge that offers other novelties — bottle openers, nail puller, etc. The very concept of zombie sword was born out of the modern tactical “Ninja Sword,” which offered similar and equally nonsensical features.

These tactical ninja swords are actually different from the ninjatō, the supposed preferred weapon that the shinobi or ninja carried in feudal Japan. The ninjatō from popular culture is a straight-bladed weapon. However, the truth is that ninjas probably carried the same basic katanas and wakizashis (short swords) as the samurai. References to a ninjatō didn’t even show up until the 1950s, and if anyone carried straight bladed swords in feudal Japan it was likely ashigaru – the infantry units that fought alongside the samurai — rather than ninja/shinobi. These troops eventually adopted rifles and had short straight blades as a backup weapon.

Is the use of a tactical blade limited? Yes. But if society breaks down, then the right blade could be essential.

The obvious choice might be to go the route of Michonne from The Walking Dead. Of course, picking up a katana at the local kung fu shop will get you a cheaply made sword that likely won’t hold an edge. The show never explains where she found her sword, but a good place to look would be an art museum. The New York Metropolitan Museum of Art has the largest collection of Japanese arms and armor outside of Japan. Those swords have an edge that could easily take off a zombie’s head, along with the head of a non-undead (living) person.

A sword more fitting, and likely easier to acquire, would be the U.S. Army Model 1913 Cavalry Saber. The U.S. Army was still issuing cavalry sabers just over 100 years ago. However, the really cool part is that the future General Patton designed it 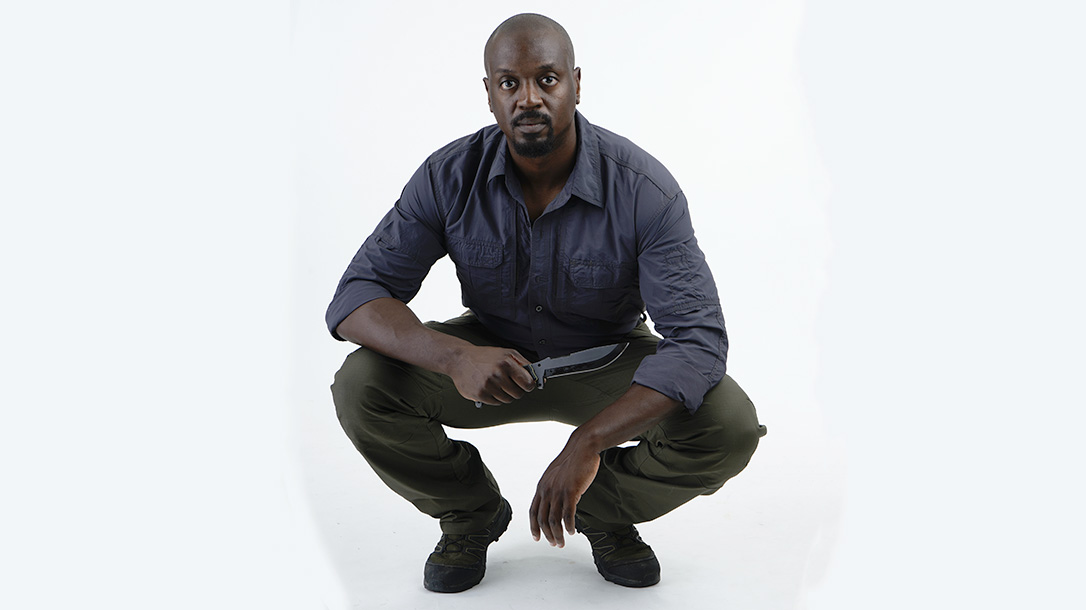 George S. Patton, in addition to being a great leader (apart from occasionally bitch slapping his soldiers), was also quite the athlete. He competed in the 1912 Olympics taking part in the modern pentathlon. This included fencing, freestyle swimming, equestrian show jumping and a combination of pistol shooting and cross country running. Patton finished 20th overall. This happened because of controversy over whether he missed a target or sent one through the same hole. However, he came in fourth in the fencing. He also felt the current saber employed by the army was antiquated; it was based on a French heavy cavalry sword from the Napoleonic Wars a 100 years earlier.

The Model 1913 featured a large basket-shaped hilt to protect the hand and a double-edge, straight thrusting blade. This made for quicker attacks over the standard slashing maneuver. While officially a saber it lacked the curved edge that had long defined sabers.

The British military had adopted a straight blade cavalry sword just a few years earlier, the Pattern 1908. This was the last service sword the British Army issued to its cavalry. It has been described as the most effective cavalry sword — ironic as the age of cavalry was all but over.

So perhaps this is where those faux straight-bladed ninja swords are correct. The idea for thrusting has advantages over slashing, especially when an opponent lacks heavy armor.

The curved blades of a katana, a scimitar or an talwar offer an advantage to a mounted warrior. Someone charging into the enemy will have time to make a slash with devastating effect. However, it is better to thrust if you’re going to be standing your ground.

The final reason to consider military style blades — whether the Model 1913 “Patton” saber or the Pattern 1908 cavalry sword — is that even at more than 100 years old, these military-made blades are likely as reliable as anything made today. That is how you live by the sword and survive by the sword.