When some people see the XM42, they immediately think, “WANT!”

Others might think or cry out, “Why?!” But those who think that are usually the type who don’t understand why you would need an AR, why you would own more than one gun or why you would want a totally awesome flamethrower from an American company.

The handheld XM42 was conceived by American dreamers at the Ion Productions Team. It is the world’s first commercially available flamethrower. And quite frankly, this thing is badass. It melts ice, starts bonfires, eliminates weeds with extreme prejudice, can perform controlled burns (not suggested in urban environments) and light your friend’s cigar (also not recommended).

This is a great representation of what American freedom is. If you’re still asking yourself “Why?” and just don’t get it, maybe you would be better served if you took up quilting and started a cat collection. 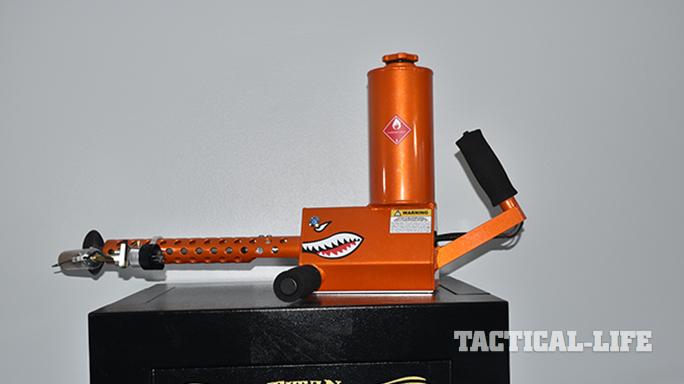 Let’s start off with the legalities of owning a flamethrower. Doing some research showed that a flamethrower is an unregulated item, and you can own one unless you live in California, Maryland or Warren, Michigan, which has legislation in place restricting them. California and Maryland aren’t surprising in that list, but what gives Warren, Michigan? Don’t like freedom much?

I had a chance to visit the Ion Productions Team in Detroit before the company relocated to Phoenix, Arizona. I was expecting to see charred walls, fire damage, burnt faces and maybe a little fire going in the corner, but I was disappointed. The facility was hospital clean, and everything was orderly and in place. There I met Chris Byars, the Ion Productions Team’s CEO/president and the mastermind behind the XM42. I asked this mad genius about what spurred him on to create the XM42. His answer? He was inspired by the movie Aliens and video games like “Halo,” and he wanted a true-to-life flamethrower, not a lighter held up to hairspray.

The current third-generation XM42 features aluminum and stainless steel construction and weighs approximately 7.4 pounds empty. But with the 1.5-liter fuel tank filled up, it weighs about 10.4 pounds. This fuel tank will support up to 30 seconds of non-stop-giggling flame time.

A check valve in the fuel cap prevents unwanted vapors from escaping and catching on fire. A deflector dish at the nozzle isolates the fuel and flames to the very end for safe operation. A high-intensity butane pilot torch is powered by either a camping-stove-style butane/propane canister or an 8-ounce butane canister, which you’ll need to buy separately. The pilot ignition is done via push-button Piezo start.

The power button is on the left side, and it illuminates when the system is ready. Towards the back you’ll find the momentary switch trigger for the fun to start. The XM42 is powered by a 12.6-volt lithium-polymer battery with a run time well over four hours. Just check the battery once in a while to make sure it doesn’t drop below 10 volts. The flamethrower is currently available in 11 standard powdercoat options, with custom colors available, including custom Cerakote themes by Blowndeadline. We had the standard Inferno Orange for testing, and boy, it looks good. 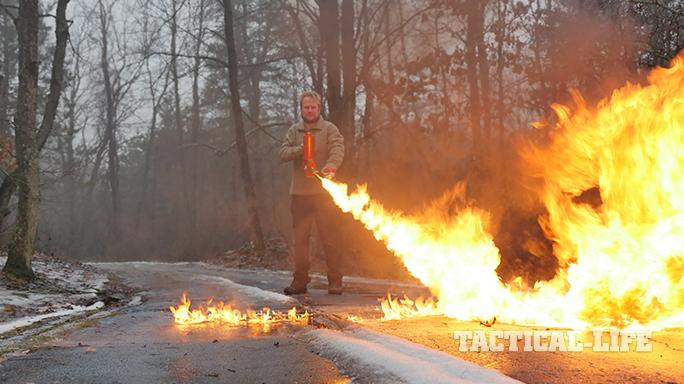 The nice thing about the XM42 is that you can fuel it with anything that is flammable—gasoline, a gasoline-diesel mixture, denatured alcohol, vodka. If it burns, you can run it through the XM42. But denatured alcohol is not recommended because it might eat away at some of the unit’s seals. It’s better to be safe than a piece of crispy bacon.

I ran the XM42 on unleaded gasoline, and man, it was a blast! I first tested it on my driveway to help melt some ice. Granted, it takes a lot of energy to melt ice, but this was one fun way to do it. Also, once it got warmer, the XM42 helped me get rid of some pesky weeds around my fire pit—a chore that I would normally grumble about, but this time I was giggling instead. The downside to it? When you’re having fun, time flies, and 30 seconds goes by quickly. The flame can reach out to 30 feet, so be careful what you have in your line of fire.

So, what can you do with it? Well, it depends upon your imagination. The Ion Productions Team suggests you can use the XM42 for clearing snow and ice, eliminating weeds, facilitating controlled burns, firefighting, controlling ground insect hives, performing at pyrotechnic events, starting bonfires or simply putting on a fun and exciting display. Trust me, it’s fun and exciting if you’re just showing it off to family and friends or putting it to work.

Each XM42 is hand-assembled using over 50 components, and each one undergoes thorough inspection and testing processes before shipment. I bring this up because of the XM42’s $1,200 to $1,300 MSRP. It is not an inexpensive flamethrower, but it is a huge step up from a lighter and a can of hairspray. That’s also why the Ion Productions Team recently moved out to a larger facility in Arizona with hopes of bringing costs down.

Chris Byars and his team have something special here—something that screams America and freedom. Besides working on flamethrowers, they are proceeding to do some research and development in other fields. This is definitely a company you’ll want to keep your eye on. Until then, burn on!