by David Bahde
in Guns, Rifles
0

It’s an argument that will continue forever. Rather than ask which is better, ask what’s better for you.

Everything about precision rifles has changed in the past several years. Their capabilities have improved while their costs have gone down, and there are more “long-range” guns available now than ever before. 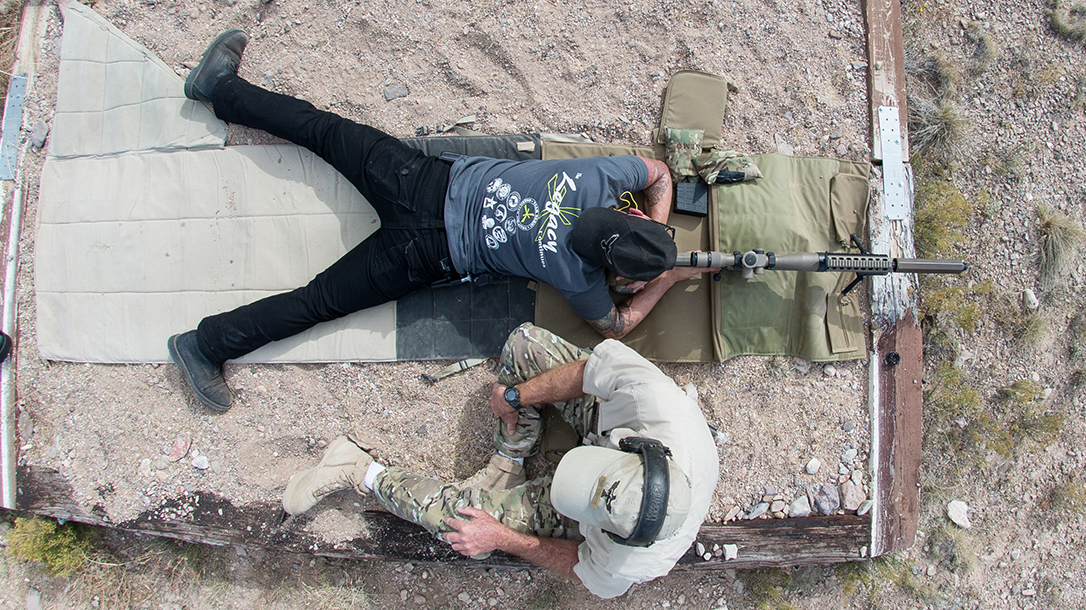 When I started this kind of shooting years ago, “precision” meant anything that could create 1-inch groups at 100 yards. Accurate precision rifles would put five rounds into 5 inches at 500 yards. “Experts” at the time said that anything more precise just wasn’t necessary for field work. Besides, “no one could shoot farther.”

Factory-made bolt actions could generally produce 0.5-inch groups at 100 yards, but tighter accuracy cost you—sometimes thousands of dollars. Semi-autos in this arena were pretty much vaporware. The SR-25 could produce this kind of accuracy on occasion, but mostly not, and “civilian prices” at the time could reach $10,000. Without regard to caliber, truly precise semi-autos just didn’t work, at least not reliably enough to field.

Well, times have changed, and nothing could be further from the truth today. Let’s start by busting some common myths that still persist in the shooting world today.

I test dozens of ARs a year, and this line of thinking just isn’t true anymore. With a capable shooter, many factory ARs will hold the “1 inch at 100 yards” standard using match-grade ammunition. Precision ARs will cut that in half, outperforming most shooters. Everything about the AR platform has improved—barrels, triggers, overall construction and tuning, quality of materials—you name it. If you want a precision AR, they are available and capable.

2. “Only a custom bolt rifle can be truly precise.”

Well, that depends on what you consider “precise.” If you mean same-hole accuracy, all the time, out to 1,000 yards—maybe, if you’re capable enough. But is it necessary or worth the cost? I have tested new rifles from Ruger, Mossberg, Tikka, Savage and others, and they all produced groups between 0.3 and 0.5 inches at 100 yards using factory match ammunition. None were custom or cost more than $2,000, and yet they could hold 1 MOA out to 1,300 yards or even a mile with proper ammunition.

You just don’t need to spend thousands of dollars on a rifle for precision. Does that money get you some things? Sure, but the differences are so minimal that it’s just not required. When a factory Tikka T3x TAC A1 in 6.5 Creedmoor will put 130-grain Federal Gold Medal Berger rounds into 0.3 inches at 100 yards and hold 0.75 MOA or less out to 1,300 yards, it’s hard to justify what any extra money will buy you.

3. “The only way to be truly precise is to handload.”

That was true, but not anymore. Factory match ammunition today rivals anything but the most dedicated handload. Black Hills, Federal, Hornady, Prime Ammunition and a few others produce consistent and accurate match ammunition. A few smaller companies like Copper Creek, DoubleTap and Applied Ballistics Munitions provide what is essentially handloaded ammunition; it’s costly but incredibly consistent. Unless you need benchrest accuracy or use some cartridge no one supports, factory ammo will do anything you could ever want it to do.

4. “If you want precision, you must have an expensive scope.”

Optics help you see the target, not hit it. If the scope will hold its zero with consistent measurements, you’re fine. No, this doesn’t mean you can attach some $300 scope from the Internet and expect consistency, but you don’t need to break the bank. Scopes costing $3,000 or more have advantages, including visibility in low and failing light, lack of glare, clarity at the edges or at higher magnification, etc. At the extremes, it makes a difference. Some are more rugged; some not all. Today’s mid-range scopes—costing between $1,000 and $1,500—are excellent. Bushnell, Leupold and Nightforce make great scopes at reasonable prices. Even a few under a grand will do anything above-average shooters will ever need them to do. If you can afford it, fine, but don’t believe it’s a necessity.

AR or bolt rifle? It’s an argument that will continue forever. Rather than ask which is better, ask what’s better for you. Rifles are simply projectile launchers; it’s more about what you do with them and the ammunition you use. Which is better depends on your intended usage. 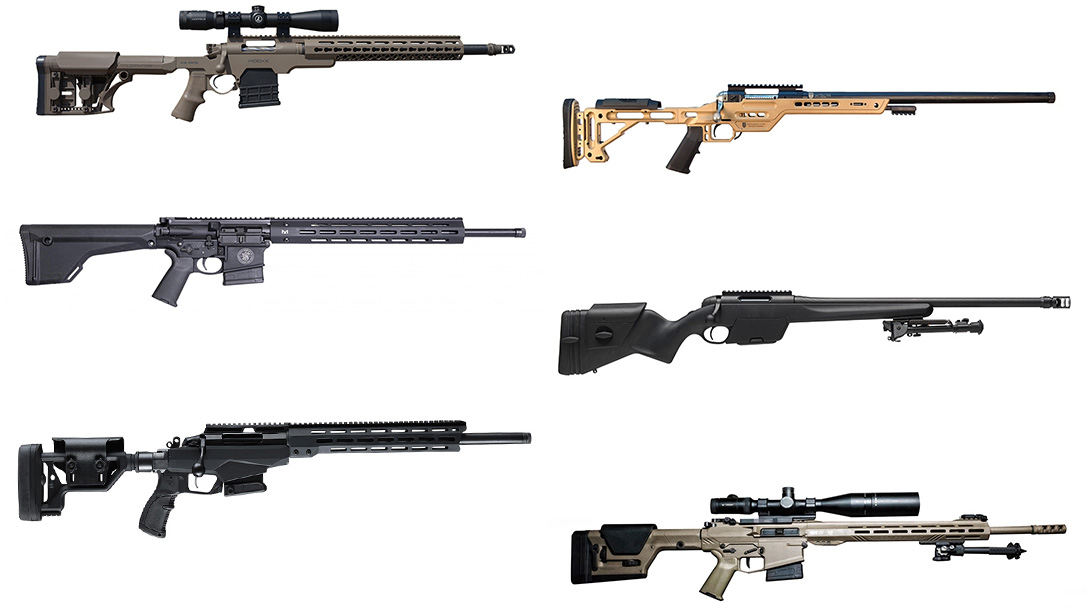 ARs and bolt rifles are capable of roughly the same accuracy, but the latter is easier for most to shoot well. Just close the bolt and nothing really moves until you open it again. Nothing moves after the shot, either. With an AR, the bolt has to open, then return without you disturbing it. Unstable positions compound the issue. This is why most precision rifle competitors start with bolt-action rifles—they are just plain easier to shoot well. I have seen experienced bolt-rifle guys have great difficulty achieving the same accuracy with an AR. It takes practice and focus, which a bolt rifle will let you slide on at times.

ARs aren’t complicated, but they do have more moving parts than bolt guns, which can affect accuracy and precision. Their gas operation must be consistent. The bolt speed, buffer and spring weight, receiver design and construction are all important. All a bolt gun needs is a properly installed barrel and a centered and trued bolt face. A good trigger with positive extraction and ejection is all that’s left. The rest is about shooter comfort. Bolt rifles aren’t perfect, but an AR has more components that can fail.

Apples to apples, ARs have less recoil. Their moving parts suck up felt recoil, and properly tuned, they shoot softly with very little barrel movement, keeping you on target. Given the same muzzle device, the AR will move less. My .260 Remington AR equipped with a ZRODelta or similar brake shoots like a .223 Remington carbine. You can watch hits at 100 yards, stay on target and make corrections faster. You can get your bolt rifle to similar levels, but overall, the AR is softer and moves less.

Shooting an AR is faster. The rifle does all the work. After the first round, it unloads and reloads. You never move. I can run a bolt rifle as fast as anybody, but never as fast as an AR. You stay on target and attached to the rifle through the entire cycle. Everything is at your fingertips. Repeat shots and tracking your misses are faster and easier. Your control hand never comes off the rifle—just point, shoot, track and repeat as needed.

It’s also easy to make an AR completely ambidextrous, and many come that way. This makes it easy to switch sides or shift to different positions. From either side, you can stay on the rifle the whole time. Barring a malfunction, you can run the rifle until it’s empty without ever removing your control hand.

On the other hand, sound suppressors continue grow in popularity; there are even matches that require them. Getting them to work properly on an AR can range from being inconvenient to a nightmare, especially with larger calibers. These guns will get dirty faster, run harsher and might be unreliable. It can be done, and some new suppressors are making it easier, but it’s still an issue. Your bolt rifle may experience some increased bolt lift during rapid fire, but that’s about it.

If you are new to rifles in general and want to get into the precision world, I recommend an entry-level bolt rifle like the Ruger Precision Rifle, Tikka T3x TAC A1 or similar. They are simple, accurate, affordable and very user-friendly. People seem to either really love shooting precision rifles or totally dislike it, so spend as little as possible to figure that out.

Even better? Borrow one. In many cases, local competitions will loan you a rifle.

If you’re an experienced AR shooter, don’t hesitate to start there. On the competition front, gas gun matches are typically limited to 800 yards with divisions that cater to ARs in 5.56mm NATO. If you enjoy it or get hooked, then look at moving up in caliber. You can always compete in a normal match, but most are geared towards bolt rifles. Sometimes that works in your favor; other times, not so much. But you’re ultimately out to have fun on the range, so don’t hesitate to go that direction. Bring your kids!

In the end, there is no better time to take the precision rifle plunge. It’s never been more popular and supported. Local matches are popping up all over the country. They are generally a ton of fun, providing some challenging shooting in a single day. Affordable rifles are plentiful, with more added each year.

Whether you choose a semi-auto or bolt rifle, shooting at longer ranges will make you a better shooter. Focus on your skill (not gear), start slow and upgrade as you can, staying focused on becoming a better shooter.

Above all, enjoy yourself. It’s the most fun you can have with a rifle.