Most shooters have felt the impact of ammo shortages and supply chain issues when looking for a new firearm over the past couple of years, but the gun industry still managed to squeeze out a few new rifles for 2022. And, since there was not a SHOT Show in 2021, a few more rifles launched last year got a nod at this year’s SHOT Show. This rundown highlights 15 of the best hunting rifles seen at this year’s show. 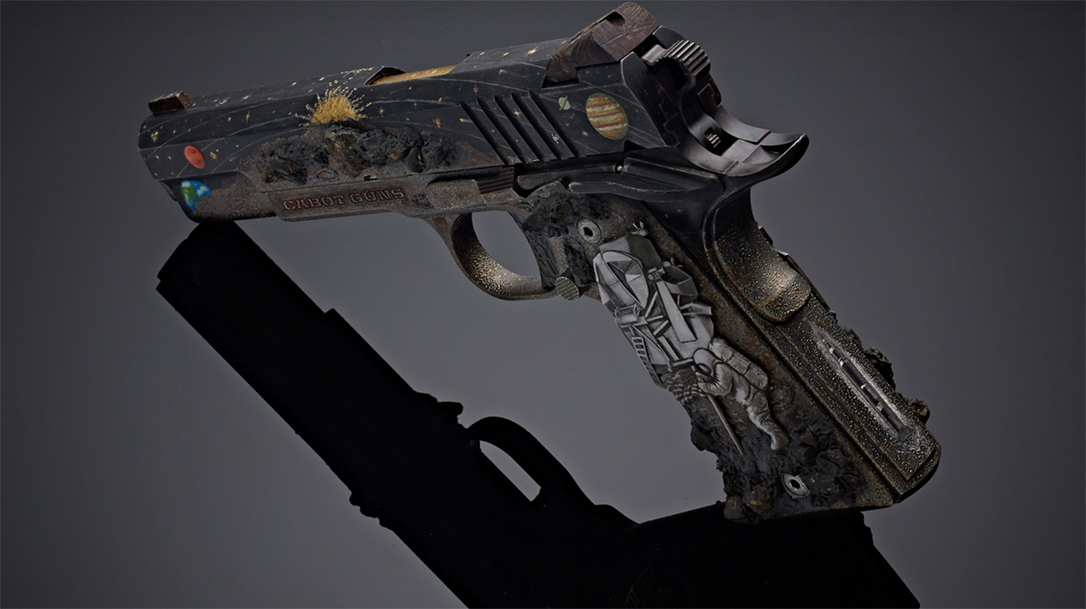 Most of the hunt-worthy centerfires this year will be bolt-actions, but there are a few shining exceptions.

The Benelli Lupo hit the market to wide acclaim in 2020 as the company’s first bolt-action rifle, while combining innovative technology first put forward in the company’s line of premium shotguns.

Backed up by a 25-year warranty, this year’s Lupo Limited Edition features an exclusive gloss coating on metal parts designed to prevent rust, corrosion and abrasions. Fitted with a fancy walnut stock, this Lupo version offers a free-floated barrel with a 5/8-24 TPI muzzle, 60-degree bolt throw and stock spacers to customize fit from a 13.8 to 14.75-inch length of pull. An adjustable trigger is a welcome feature, too.

Beginning in May, Benelli will introduce the first of three new chamberings for the Lupo series big-game rifles: 6mm Creedmoor, 6.5 PRC, and 7mm Rem Mag. The new 7mm Rem Mag -chambered Lupo will be available in May 2022, followed by the 6mm Creedmoor in June along with the 6.5 PRC in July. (benelliusa.com)

Retail price should be approximately $900. (franchiusa.com)

If you prefer the classic fit and feel of a hunting rifle stock without the extra weight, Bergara’s Premier Series Canyon rifle, built on a 100% carbon fiber AG Composites stock may fit the bill. The No. 4 fluted barrel with the 5/8-24” threaded Omni brake allows reduced felt recoil when shooting the heavy-hitting caliber options. The M5 floor plate gives you the ability to customize with either the detachable magazine or a hinged floor plate. The Canyon rifle is the perfect balance of a lightweight and portable hunting rig.

The Canyon’s two-position safety is part of the trigger assembly, which is a TriggerTech Frictionless Release Technology trigger. One great feature of this combination allows the bolt handle not to lock in the closed position, which in turn allows the rifle to be unloaded while in the safe position. The Canyon offers two barrel lengths, 20- and 22-inch, with chamberings to include 6.5 Creedmoor, 6.5 PRC, .308 Win, .300 Win Mag, 300 PRC, 28 Nosler and .375 H&H. MSRP hovers around $2,400. (bergara.com)

CVA jumped into the bolt-action arena with their Cascade rifles not long ago, and new this year are their SB Series models. The “SB” stands for “Short Barrel.” It caters to hunters in tight spaces like hunting blinds. The 6.5 Creedmoor and .308 versions sport an 18-inch tube, while the 300 Blackout sports a 16 ½-inch barrel. The abbreviated barrel mates well with a suppressor, since it’s short and threaded. Retail price is about $670. (cva.com)

CZ is their old models CZ 527, CZ 557 and CZ 550 Safari rifles with the new 600-series bolt-actions in 2022. The CZ 600 series comprises of four basic models this year: The Alpha, Lux, Range and Trail.  CZ’s 600 action incorporates a two-row, three-lug design, with the exception of the mini action’s three lugs.

The CZ 600’s action enables swapping barrels, and the bolt heads interchange, too, to reconfigure the bolt to fit various cartridge heads. CZ took a novel approach to their 600 series safety. It’s a tang-mounted vertical push button plunger. You push down to release, or reach behind the trigger guard to push up and back into the safe position. Engaged, the safety locks the bolt.

Other key features include threaded muzzles, polymer detachable box magazines and prices that provide a lot of value.

Ruger launched its new line of Marlin rifles with the Model 1895 SBL. This is a .45-70 lever-action that’s the first to come out of Ruger’s Mayodan, NC, factory. Check out Marlin is Back!, for more details. (marlinfirearms.com)

The next rifle to join Mossberg’s MVP lineup is a 300 Blackout model that accepts AR-style STANAG magazines.

The MVP Patrol in 300 BLK wears a 16 ¼-inch barrel, Picatinny rail, iron sights. Capacity comes limited only to the size magazine used. It should be noted that the threaded barrel is 1:7-inch twist, so it’ll handle long, heavy subsonic bullets with ease.

Want a great bolt gun to shoot 300 Blackout subs? This one might just become a favorite. Even though the 300 Blackout cartridge was engineered to run in an AR, the ultimate in quiet shooting is a bolt-action repeater shooting subsonic ammo. (mossberg.com)

Not just a bullet company, Nosler has earned a reputation for producing precision hunting rifles, too. Their latest is the Model 21, at the heart of which is a Mack Brothers-designed action that cycles smooth as silk. The action is a Remington 700 footprint, which utilizes a TriggerTech Field trigger. It also features a more reliable M16-style extractor. Add a Shilen match-grade barrel and a carbon-fiber stock and you’ve got a light-weight rig that’s ready to hunt.

Savage Arms’ joined forces with Magpul to unite a fine aftermarket stock with its legendary 110 action. A factory blueprinted action and heavy-contour 18-inch threaded barrel chambered in .308 Win or 6.5 Creed promises to be a stout tack driver.

Metal finishes are Grey Cerakote, and the Magpul stock is, of course, classic black. Since it’s a Magpul, it incorporates bottom metal that uses AICS-pattern Magpul magazines. A 20 MOA Pic rail is optics ready. MSRP is $1,045 in either right- or left-hand configuration. (savagearms.com)

Weatherby’s Backcountry 2.0 builds on the classic steel Weatherby Mark V action, with several key updates. Still equipped with a lightweight fluted barrel, it is contoured differently to the lightest practical dimension. Another upgrade is the new carbon fiber Peak 44 Blacktooth stock, the lightest versions of which tip the scales at 1 pound, 4 ounces.

Starting at just 5.2 pounds, or 5.4 pounds in magnum chamberings, the Backcountry 2.0 also sports an updated paint scheme, with action and barrel protected by a Cerakote shell of Patriot Brown, with the stock carrying a brown and green pattern over exposed carbon fiber.

Weatherby’s Mark V Backcountry 2.0 Carbon sports a carbon-wrapped barrel to shave some more weight. The Ti, Back Country Mark V sports a titanium action, trimming more ounces. Stepping it up another notch, the Back Country Mark V Ti Carbon adds a light-weight carbon-wrapped barrel. The suggested price for a Backcountry Weatherby starts at $2,499 and goes up to $3,849. (weatherby.com)

The two previous models join three other new for ’22 rifles with Christensen’s Flash Forged Technology, which perfects the company’s carbon-reinforced designs. The other models include the Mesa FFT Titanium, Ridgeline FFT Titanium and Ridgeline FFT Scout.

The Scout comes as a trimmed-down version of the Ridgeline with a 16-inch barrel wrapped in carbon fiber. An included flash hider attaches to 5/8-24 TPI muzzle threads. Bottom metal accepts AICS-style magazines. A Pic rail section at the forend bottom allows for bipod attachment, and a 0 MOA Picatinny rail scope base comes ready to affix an optic.

Browning’s X-Bolt is introducing two new versions for 2022. The X-Bolt Mountain Pro sports a carbon-fiber stock that lightens the package. The barrel includes a muzzle brake and thread protector. A stainless-steel receiver and Cerakote finish raises its weather resistance. It also features a Picatinny rail for bipod mounting. MSRPwill be in the $2,480 range.

The X-Bolt Speed gets the company’s OVIX camo with bronze Cerakote finish this year. Its fluted, threaded, sporter-contour barrel includes both a thread protector and a muzzle brake. MSRP mid-$1,300s range. (browning.com)

Winchester’s new-for ’22 Model 70 Extreme Hunter Strata MB is built to handle harsh environments. The barreled action is finished with FDE Cerakote, and that gets nestled into a Bell and Carlson synthetic stock. TrueTimber Strata camouflage on the handle mates well with the FDE metal finish. Other features include a threaded muzzle with brake and a Pachmayr recoil pad. MSRP is $1,799. (winchesterguns.com)

Henry Repeating Arms is pleased to introduce two new models to its expansive line of American-made firearms with the Long Ranger Express and the Brass Axe .410 Bore. These latest releases are a continuation of Henry Repeating Arms’ focus on customer feedback-driven product development.

The new Henry Long Ranger Express, chambered in .223 Rem/5.56 NATO, is a versatile, quick-handling carbine with a feature set aimed at property defense, predator hunting, and varmint control. The black anodized aerospace-grade aluminum receiver is factory mounted with a Picatinny rail for use with optics and accepts a 5-round steel-bodied detachable magazine. The 16.5” blued steel sporter barrel is threaded for use with a suppressor or other muzzle device and keeps the overall length down for maneuverability. The weather-resistant laminate furniture set features sling swivel studs and a solid rubber recoil pad. The manufacturer’s suggested retail price is $1,235. (henryusa.com)

After changing the muzzleloading industry in 2020 with the introduction of the NitroFire in collaboration for Federal Premium and Hodgdon, Traditions is excited to announce the next innovation – the NitroFire with the VAPR Twist.

Introduced for 2022, the NitroFire will now feature a 1:24-inch VAPR Twist barrel. The faster twist helps to better stabilize bullets, increase accuracy, and expands the bullet options that can be used.

As the first and best muzzleloader on the market that uses the Firestick system, the NitroFire has now been elevated to a new level with the 1:24” VAPR twist barrel. The MSRP ranges from $549-$699. (traditionsfirearms.com)