The 9mm SIG MPX is a flawlessly reliable and compact firearm designated as a pistol that is ideally suited for backpack carry.

During my law enforcement career, I learned a great deal about carrying and transporting firearms. This was especially the case after I transitioned from my police position to a career with the U.S. Customs Service and I was more heavily armed. This included when I worked undercover. I was issued a 9mm Walther MPK submachine gun with a side folding stock and three 32-round magazines. The fact that this subgun came in a nondescript green-colored heavy cotton zippered case made it easy to transport it like other bug out guns. 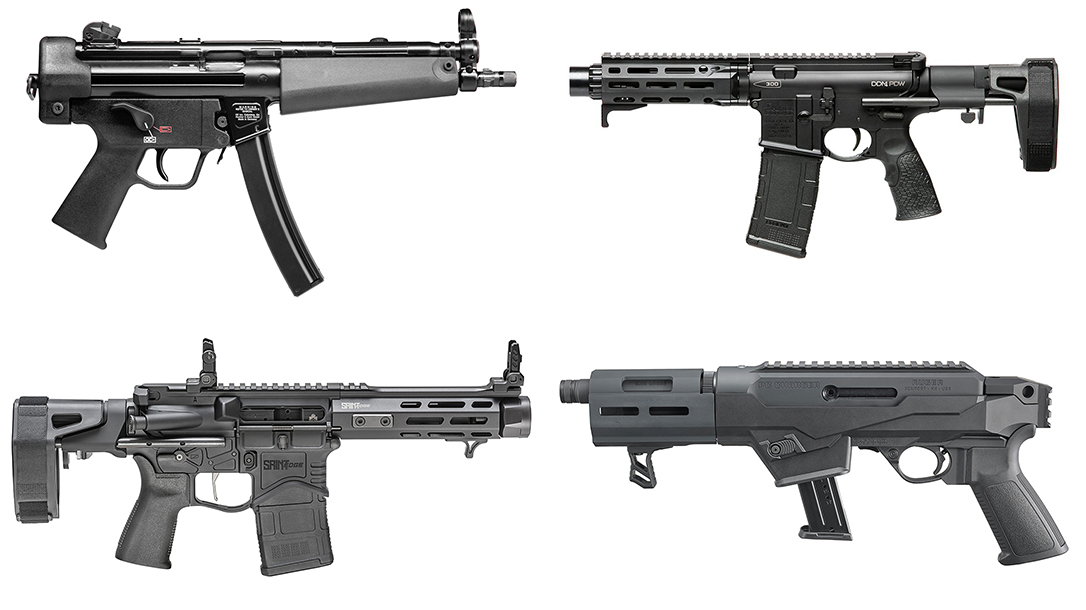 I learned a great deal about transporting critical supplies and equipment while operating in remote locations. Doing so gave me some additional insight into the different ways that a legally armed American can transport personal defense weapons, AKA bug out guns, and ammo when they forced to relocate during a serious emergency. After I retired and I began writing magazine articles, I learned even more about this subject when I field-tested backpacks, tactical bags on wheels, load-bearing vests, rifle cases and firearms for various publications. Here I bring you the best of my findings.

Law-abiding citizens who wish to possess firearms should obtain a concealed carry (CCW) permit in their state of residence. Pair this with non-resident CCW licenses in as many states as possible. Doing so will ensure that you can legally travel through and/or temporarily reside in certain jurisdictions while armed with a concealed firearm. You also need to comply with all federal and state laws when you possess firearms in any jurisdiction.

As far as safety is concerned, the most secure way to transport firearms in a backpack is with an empty chamber and with the safety on. This can prevent a firearm from discharging while being transported with other items in a backpack.

Your survival will depend on several factors. This includes your ability to protect yourself while remaining properly hydrated, fed and clothed. As a result, you’ll need to carry and transport a variety of survival supplies. This as well as the means to protect yourself when you’re compelled to leave your home or any safe zone during a serious emergency. However, in order to do so, you’ll likely have to compromise a little when you assemble your survival kit. You can only carry so much weight for so long.

You can accomplish this by carrying and transporting firearms that allow you to possess a larger number of life-saving supplies, including more ammo. This can be achieved by carrying handguns like a 9mm Sig Sauer P320 Subcompact, a 9mm Springfield Armory XD Subcompact, a 9mm Smith & Wesson M&P Shield, a 9mm Glock 26 or a 9mm Glock 43. The only reason to do otherwise is that you’re more proficient with larger handguns. I recommend using 9mm pistols because this caliber of ammunition is lighter than .40 or .45 ammo. You also need to possess a cleaning kit and a supply of lubrication. My personal favorite products are Ballistol, Slip 2000 and Break Free.

Carrying a lightweight 9mm pistol will enable you to carry a larger supply of ammunition. You can also carry more water, food, medical supplies and some extra clothing. Remember, your goal is not to get involved in a succession of Hollywood-style gunfights. You want to avoid trouble while being capable of defending yourself in an emergency.

If you carry a 9mm pistol concealed on your person and you decide to possess a second firearm, one option worth considering is to transport a 9mm semi-automatic subgun-sized pistol with an SB Tactical stabilizing brace in your backpack. Doing so will enable you to have access to two firearms that use the same ammunition. Top choices: the CZ Scorpion EVO3 S1 (5.12 pounds unloaded with the SB brace). The Heckler & Koch SP5K (4.92 pounds with the brace) or a well-made SP5K-style clone. The SIG MPX (4.6 pounds unloaded). However, my advice is to examine all three models because there are multiple differences among these designs. This includes cost, construction, standard features, weight and balance. As far as accessories go, SB Tactical’s stabilizing brace is a high-quality product. It’s ideally suited for use on compact firearms that are designated as pistols.

When it comes to shotguns, the top gun among heavier-caliber backpack firearms is the pump-action, 12-gauge Mossberg Shockwave. Look at the pistol-grip variant that holds six rounds, weighs 5.3 pounds unloaded and is 26.37 inches in length. You can increase the capacity of the Shockwave from six rounds of 2.75- or 3-inch 12-gauge ammunition to eight by using lighter-weight, softer-shooting and very effective Aguila 1.75-inch Minishells. However, in order to reliably cycle the shorter Aguila Minishells, you’ll have to install an OPSol Texas Mini-Clip 2.0 in the lower receiver.

Mossberg also makes Shockwave-model shotguns in 20 gauge (4.9 pounds unloaded) and .410 gauge (4.2 pounds unloaded). The Auto-Ordnance .30-Caliber M1 Carbine Paratrooper Model with the side-folding metal “wire” stock is another relatively lightweight firearm (5 pounds, 6 ounces unloaded). It accommodates 10-, 15- and 30-round magazines. At 25.75 inches long when carried with the stock folded, the Paratrooper Model carbine is also compact enough to be transported in a backpack. M1 Carbine .30-caliber ammunition is also relatively lightweight to carry in bulk.

At an empty weight of 5 pounds, 8 ounces and a length of 26.5 inches, the Springfield Armory SAINT AR-15 Pistol chambered in 5.56mm NATO is another outstanding semi-automatic firearm. It’s transportable in a duffel bag with shoulder straps or in certain sized backpacks. Even though the SAINT pistol with a fixed position stabilizing brace needs to be transported in a larger carrying case, it’s worth possessing due to its lightweight construction, reliability, caliber and parts compatibility with other AR-15 variants. The .223/5.56mm NATO-caliber ammunition is also readily available in the United States.

Two of the most compact, rugged and reliable heavier-caliber backpack firearms are the IWI Galil ACE Pistol with an 8.3-inch barrel and a side-folding stabilizing brace in 5.56mm NATO caliber (7.3 pounds empty) and the Galil ACE Pistol in 7.62x39mm that weighs 7.2 pounds unloaded. Galil ACE Pistols have an overall length of 26.75 inches. They use the same Magpul PMAGS that reliably operate in AR-15s/M4s and AK-47 rifles. IWI equips its Galil ACE Pistols with AR-15-style tritium sights. They also have a Picatinny rail that can accommodate a red-dot optic. Always remember that it’s critically important to wear hearing protection when you fire or operate any firearms, especially short-barreled shotguns or any of the short-barreled .223/5.56mm NATO and .30-caliber firearms.

One of the best bug out guns to possess during a crisis is a flawlessly reliable .22-caliber pistol or rifle. In addition to the fact that the Ruger 10/22 weighs 4.6 pounds unloaded, its .22 LR ammunition is very lightweight. This means that it’s possible to carry a large quantity of .22-caliber ammo. The problem with .22-caliber firearms is that water and moisture can compromise your ammunition supply. One way to address this concern is to vacuum-seal freezer bags with different amounts of .22 LR ammunition.

Even though I’m a big fan of revolvers chambered in .38 Special, this ammunition is heavy to transport in bulk. One alternative is to carry a Glock 42 (13.7 ounces unloaded). Another option is the Smith & Wesson M&P Shield EZ pistol in .380 ACP (18.5 ounces empty). In addition to being very compact and lightweight, these pistols are accurate and impeccably reliable. Carrying a Glock 42 or an S&W M&P Shield EZ concealed on your person will also enable you to carry more survival supplies and/or a larger-caliber firearm in your backpack. The fact that .380 ACP ammo is lighter to carry in bulk than most handgun calibers is another reason to consider this option.

Once you leave home for any reason, you may have to make do with the items that you possess on your person and/or in a backpack. As a result, you need to choose wisely when you assemble your bug out guns kit. The alternative is to be ill-equipped and unprepared to survive.