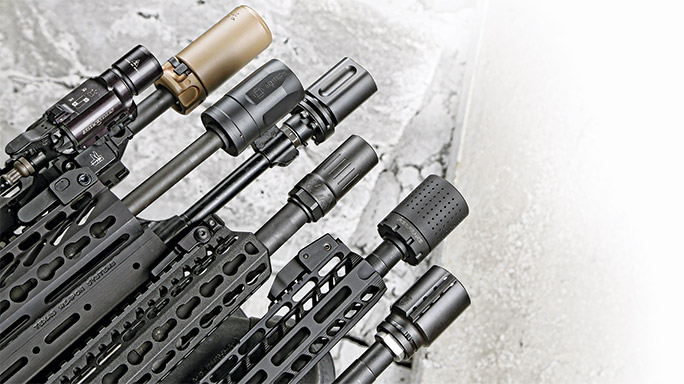 If you take a quick spin around the Internet, your brain will cramp from seeing all the opinions and designs out there. Bolt carrier groups come in an array of flavors, from mil-spec to unicorn bone. OK, maybe not the latter, but it’s not far off the mark.

Fear not. I’ll decode much of the blur associated with the BCG world and highlight a few I think are worth a close look.

First off, different styles abound. There’s the standard mil-spec carrier and many others. For the sake of time and ink, we’ll look at the big players. Those include low-mass, titanium, steel and hybrid designs.

Before we really dive in here, let’s discuss “mil-spec.” This magical term seems to be the key to opening wallets in the firearms market. Mil-spec has no magical SEAL Team 6 facets, nor does it indicate ultimate superiority to other products. It’s a set of criteria for companies to use when building items for the military.

The mil-spec umbrella covers everything from flashlights to tires, each built with set criteria. That’s not to say they’re bad. Mil-spec BCGs are solid and work well. They are not, however, anything more than what they have to be. The moral of the story is you shouldn’t immediately write off something that isn’t described as “mil-spec.” It could exceed those parameters.

One you’ll see often is “MPI,” which is short for magnetic-particle inspection. It’s done via electromagnets, a special solution and a UV light. The process looks for cracks in metal that the eye cannot see.

Another term is “shot-peening.” This is a process in which the bolt carrier is bombarded with tiny spherical shot pellets. The shot acts like a peen hammer, dimpling the surface and causing compression stresses under the dimple. This ensures the finished part will resist fatigue failures and cracking. These popular methods make certain a BCG is free from defects and made to last.

OK, that should wrap up science class. Let’s review some of today’s best BCG options. It’s worth noting that I ran all of these different designs in a standard Smith & Wesson M&P15 MOD Mid rifle. The idea was to test these BCGs in an off-the-shelf gun to see how much they added to its performance.

Low-mass carriers are relatively new in this niche of the market, and they essentially live up to their name: They help shave weight off the gun. And, because these BCGs are lighter, there is less mass reciprocating during the firing cycle, which helps you stay on target.

One of the best I’ve seen is the RISE Armament RA-1010 Low-Mass Bolt Carrier Group. RISE has several great offerings, like its Nickel Boron Bolt Carrier Group and its 308 Bolt Carrier Group, but I like the RA-1010. It provided a noticeable reduction in felt recoil compared to a stock BCG. The complete BCG weighs 8.9 ounces and is coated with black nitride to enhance strength and reduce friction. It can also be run with lighter buffers to allow for faster follow-up shots. The carrier is made of 8620 tool steel that has been heat-treated and casehardened.

The bolt and carrier have been MPI tested, and the extractor has been shot-peened. Overall, it’s a fantastic BCG and would make a great addition to a go-fast gun. For more information, please visit RiseArmament.com. 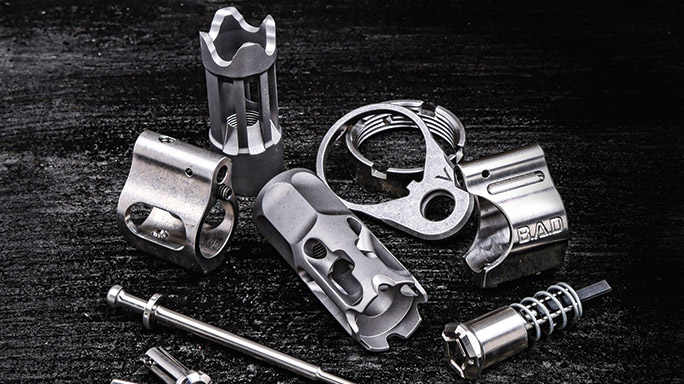 When you hear the word “titanium,” you might think of space-age technology that should have a NASA sticker. Titanium has become more popular in the firearms industry because it’s stronger than steel and weighs a touch more than aluminum.

The best titanium bolt carrier group I’ve found is from V Seven Weapon Systems. It’s a super-strong, lightweight BCG designed to stand the test of time. The BCG has a perfectly staked gas key and is compatible with semi- and full-auto fire for folks who are lucky enough to own a rifle with a liberty switch.

When you think of solid, durable materials, steel will probably be at the top of that list. It has been the go-to choice for millions of products and is used for the bolt carrier groups in the U.S. military’s M16s and M4s. It’s the top choice for many reasons, but mostly because it’s tough, heat resistant and able to withstand continuous abuse. It’s also cost effective and easy to source from manufacturers.

If you hit the Brownells website, you will see an almost endless list of steel BCGs. My choice for a unit in this category, though, is the Ultimate Bolt Carrier Group from POF-USA. As the name indicates, it has some features that help it stand out.

This unit is machined from a solid piece of alloy steel, eliminating the need to stake the gas key and the possibility of gas key screws coming loose during operation. The carrier is high-phosphate-nickel coated and features a chrome-plated bolt.

This group also features a stainless steel gas inlet tube that’s pressed and pinned into the solid gas key. This tube has been designed to allow ample clearance for the removal of the roller cam pin during maintenance. The cam pin is the most unique aspect, as it’s designed to roll along the interior of the receiver, reducing if not eliminating wear.

As you can see, this exceptionally well-made BCG is worth a close look if you’re interested in taking your gun up a notch. For more information, please visit POF-USA.com.

Some bolt carrier groups teeter on being advanced physics projects. These are designed to address the fine-tuning aspects of the AR platform. In many cases, these models use exotic metals, but some companies actually get into the physics of the BCG and try to make it better.

My choice in this category is the Variable Mass Operating System (VMOS) from JP Enterprises. As the company puts it, “one size does not fit all” when it comes to gas-operated rifles, and the VMOS ensures reliability by providing additional reciprocating mass, as well as custom tunability.

Some temperamental setups, such as suppressed rifles and exotic chamberings, require some degree of mass regulation for optimal performance. The VMOS provides a 100-percent increase in bearing surface for smoother operation, improved alignment and lower wear. It also goes through an extensive QPQ (quench, polish, quench) process that produces a rock-hard surface with remarkable natural lubricity for ball-bearing-smooth functioning with proper lubrication.

This BCG provided a noticeable dead-blow hammer feel to the S&W rifle and ran well. But there’s a caveat: This BCG is really intended to be paired with the JP Silent Captured Spring. I managed some gun yoga and installed the BCG with the buffer spring assembly a tad loose. I wish I had pressed the folks at JP Enterprises for the spring unit, but my focus was on BCGs.

If you’re serious about tuning your rifle for peak performance or helping it run better suppressed, the VMOS should be on your list. For more information, please visit JPrifles.com.

The last category of bolt carrier groups includes those designed for full-auto functioning. Much to the disappointment of many, these BCGs don’t change your semi-auto blaster into a full-auto gun.

Most of the high-quality carriers these days are actually “full-auto.” In design, they are slightly longer and heavier and have an additional lug at the rear of bolt carrier group. In a semi-automatic rifle, this has no effect on how the gun functions.

One of the best in this category is the Bravo Company Manufacturing Bolt Carrier Group (MPI) Auto. It has a Parkerized exterior and a chrome-lined interior. It’s machined to USGI specifications, and the carrier includes the proper mil-spec gas key. The gas key is chrome-lined and heat-treated per USGI specifications. It’s also is secured to the carrier via Grade 8 fasteners that are properly staked. These properly hardened parts ensure reliability.

BCM machines its bolt assembly from mil-spec Carpenter 158 steel. It is then shot-peened for increased strength. The BCG also includes a tool-steel extractor and ejector as well as BCM’s extractor spring. The entire unit has been MPI and high-pressure (HP) tested. In a nutshell, it’s bombproof—just what we’ve come to expect from Bravo Company Manufacturing.

The 5 Best Guns of 2020 According to Ballistic Magazine