by Robert A. Sadowski
in Guns, Handguns
0

"When the stuff hits the fan, you have a reliable, accurate AR pistol that assembles in seconds and will help you fight back to safety."

The new normal is not the junkie in the parking garage with a switchblade—though they still exist. Rather, it’s an organized attack consisting of one or several assailants wielding long arms and backup handguns. In this era of self-rescue, do you really think the subcompact .380 ACP tucked in your pocket will compete against rifle-caliber bullets? Is it really enough gun? If you’re wise, you would realize that a .380 is a getaway gun used to get yourself and others out of a situation and to safety. It’s not what you want in a running gunfight.

Suppose for a moment that you’re in a sprawling mall trapped between the hip clothing store and a card shop, and that smell of cinnamon buns is mixing with burnt gunpowder. Or you’re at work and that popping noise coming from the shop floor is not from a forklift. You never know when evil will visit, and any gun is better than no gun in those situations. Some guns are better.

“Firepower” and “discreet” are not words typically used in the same description. Firepower implies a large weapon, and discreet means small and inconspicuous. They do not necessarily go together—until you look at the TAC2 “Ultimate Man Bag” AR pistol. Within seconds, you can go from a victim at a shopping mall to a protector with enough firepower to fight back. The TAC2 brings AR-15 style to a new level of compactness. It carries a takedown AR-15 pistol in a bag that’s smaller than a standard laptop computer carrying case. The bag looks like an ordinary man purse, but in less than a minute, you can have a fully functional AR-15 pistol at the ready. 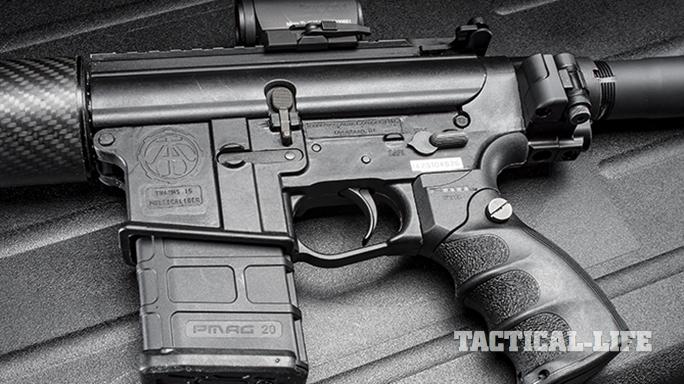 The TAC2 system is lightweight. The pistol weighs just 6 pounds unloaded. The lower receiver is made of molded polymer by Tennessee Arms Company. And the lower receiver’s controls, including the safety selector, magazine release and bolt release, are all mil-spec and in standard AR-15 locations. The triggerguard is oversized to accommodate shooters wearing gloves. Plus, the magazine well is funneled, so inserting a magazine is simple and slick. I used Parkerized steel magazines during the testing, and they were extremely fast in the polymer magazine well.

The extension tube on the lower receiver uses a Law Tactical Folding Stock Adapter. Press a button and the tube folds to the left side of the pistol. To extend the tube, just pivot it back and it locks in place. The extension must be locked in the open position for the pistol to operate. The pistol grip is a polymer folding grip from FAB Defense. Press a button on the left side of the grip and it folds up so it’s flush with the magazine well and does not stick down past it. Rotate it down and it locks into position with a snap. The grip feels good—more hand-filling and comfortable than a standard A2-style grip.

The upper receiver is made of forged aluminum, and it doesn’t have a forward assist or dust cover to help save weight. The upper is also a flattop design with a Picatinny rail for mounting optics. A red-dot or reflex sight would be a good choice for the TAC2 pistol. The handguard is a lightweight carbon-fiber tube. The barrel is short—just 6 inches—with an A2-style muzzle device. The muzzle protrudes about an inch from the end of the tube when assembled.

What make the TAC2 so concealable and covert is the way the pistol assembles and disassembles. The TAC2 uses a proprietary lug attached to the barrel that does two things. First, it makes sure the gas tube is properly aligned. The Achilles’ heel of many takedown direct-impingement weapons is the gas tube. It’s fragile and can be easily bent. The lug in the TAC2 has a notch where the gas tube can rest. The second job for the lug is to properly align the barrel in the upper receiver. Two posts at 3 and 9 o’clock align with a modified barrel nut. This ensures the barrel and gas tube mate to the upper receiver at the same time every time the pistol is re-assembled. The carbon-fiber handguard tube slides over the barrel assembly and screws onto the barrel nut on the upper, and it draws the barreled gas tube in so it’s tight with no wiggle and the bolt carrier group engages with the chamber of the barrel. It’s really a simple setup. I like the fact that the upper and lower receivers are already attached so there’s no need to mess with the takedown pins. 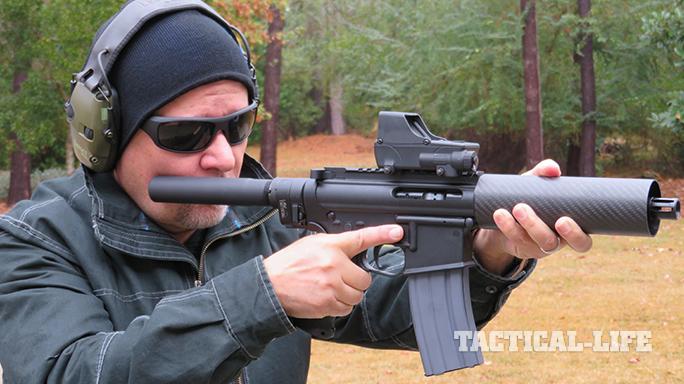 I mated the TAC2 with a Meprolight Tru-Dot red-dot sight with a 1.8-MOA reticle. Any small red dot is a good choice for the TAC2 pistol, but I’ve come to appreciate the Tru-Dot because it offers rapid target acquisitions with both eyes open, and it’s made with an aluminum body and tough polymer frame around the large viewing window. I’ve accidentally dropped it a few times, but it still works without any issues. Power is supplied by one AA battery, which provides thousands of hours of run time. An auto shutoff also helps conserve power—a good thing if you’re forgetful and don’t turn the sight off after use. The red-dot reticle has four brightness settings that you can adjust via a textured knob. The unit clamps down onto a Picatinny rail via an integral quick-detach mount. The sight adds about 10.5 ounces and takes up 4.5 inches of rail space, but it still fits in the Man Bag. The Tru-Dot was at the exact height needed for an AR-15.

My ammunition for the range testing included an assortment of cartridges with various bullet weights and types, and different case materials. I used some Federal Fusion ammo loaded with a 62-grain soft-point bullets for a factory-rated muzzle velocity of 3,000 fps. Naturally, a 6-inch-barreled AR-15 will produce a lot less muzzle velocity than one with a 16-inch barrel. And, as the data shows, the TAC2 delivered less velocity, which I expected. I also used Hornady Steel Match rounds with 55-grain hollow-point bullets and steel cases. The Aguila load I tested uses 62-grain FMJ bullets and brass cases like the 62-grain Federal Fusion load.

Using a rest, I got some impressive five-shot groups at 25 yards. On average, all of the ammo produced groups ranging from about 0.5 to 0.75 inches—plenty accurate. But that was using a rest, with controlled breathing and slow fire. Later, I torqued up the speed to see how the TAC2 performed.

I like to fire AR-15 pistols resting my cheek on the extension tube, as if I’m firing it like a rifle. Of course, I have to make sure not to use the extension like a stock, so it never rests against my shoulder. At 25 yards, the target was easy to acquire using the Meprolight Tru-Dot sight. With both eyes open, the rectangular rears lens looked like a wide-screen TV. It offered plenty of field of view, and it was easy to locate the 1.8-MOA dot on the target. The TAC2 did what I asked of it.

The trigger is a single-stage unit with almost no creep. The pull, weighing about 5 pounds, was crisp and well suited for self-defense. Had the pistol been heavier, it would have been too hard to shoot accurately. Any lighter and it might become a liability. The muzzle blast was loud, but the recoil was easy to control. I found the TAC2 easy to shoot accurately and fast.

I like to think of the TAC2 system as more of a satchel than a man bag. Actually, I can carry the TAC2 in a knapsack, briefcase, messenger bag or whatever bag you typically carry during the day. I did, and no one was aware I was carrying an AR-15 pistol with two fully loaded 30-round magazines. Compared to my normal everyday-carry gun, the TAC2 offers a lot of firepower. But rest assured, when the stuff hits the fan, you have a reliable, accurate AR pistol that assembles in seconds and will help you fight back to safety.

This article was originally published in ‘Ballistic’ Summer 2017.