by Graham Baates
in Guns, Rifles
0

Over the last seven decades, the Kalashnikov design has been modified to run a wide variety of rounds, from the needle-like 5.45x39mm to 12-gauge shells. More recently, two maverick designers — Sharps Bros. and Tromix Lead Delivery Systems — have taken the versatile platform to the next level by building an AK chambered in .458 SOCOM. 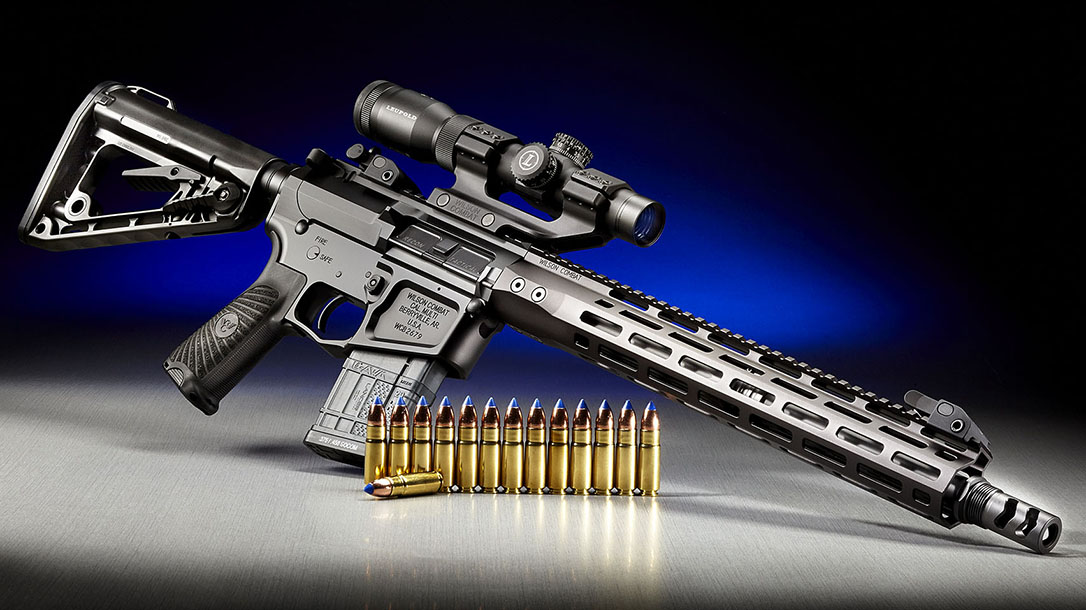 As you already know, the AK was originally chambered for the 7.62x39mm, an intermediate cartridge. Having learned from World War II, the Soviets were looking for a cartridge that, among other things, could still deliver decent energy at mid-range but was lighter to carry, less expensive to make and offered less recoil than their previous standard rifle cartridge, the 7.62x54R. Western nations also saw merit in this concept. A couple decades later, the Soviets stepped down to the even smaller 5.56x39mm for similar reasons.

In 1993, during Operation Gothic Serpent in Somalia, the U.S. Joint Special Operations Command found the 5.56x45mm round to be less than ideal against drugged militants who felt little or no pain. Unofficial conversations claimed that troops needed several rounds to neutralize numbed enemies, sparking interest in a big-bore solution.

In 2000, Teppo Jutsu created a special cartridge within the restrictions of it being able to fit into a standard AR-15 magazine and receiver set, and the company contracted Tromix to create a rifle for it in 2001. Since then, the resulting .458 SOCOM has experienced high and low points of popularity. It is available commercially in supersonic loads as light as 250 grains and heavy subsonic loads weighing over 500 grains. In terms of energy, these rounds are similar to 12-gauge slugs at best and similar to a 5.56x45mm at worst. Moreover, they’re known for amazing performance within 150 yards.

The base of any AK platform is the receiver. The lightweight stamped-steel receivers used on most AKM platforms flex under 7.62x39mm recoil, so with a goal of increased accuracy, this .458 SOCOM build uses an MB47 receiver from Sharps Bros. This receiver begins as a solid 15-pound block of U.S.-sourced steel. It is then milled down to around 2 pounds. The MB47 is patterned similarly to the original Bulgarian milled receivers but has an added receiver extension to accept AR-pattern buffer tubes and stocks.

The pioneer of .458 SOCOM rifles —Tony Rumore of Tromix — completed the rest of the 458 AK build. An adjustable gas block regulates gas from the barrel to help compensate for such a wide variety of loads. HK-style iron sights make for quick aiming, but a Picatinny rail also sits on top of the dust cover to mount optics. A brief look at internals shows the enhanced bolt face. Meanwhile, the action uses modified 5.56mm AK magazines from Circle 10.

Only two of these AKs exist as of this writing. However, I was able to test one of them for this sneak peek with a few others. In a clear cut of Oregon mountains, we were able to find about 80 yards of space to shoot some 300-grain Wilson Combat rounds loaded with Barnes TTSX projectiles. We chose this load because it sits practically in the middle of commercially available bullet weights.

Right off the bat, the recoil was surprisingly smooth. In fact, the gun felt softer than most 12-gauge AK platforms. With an unmagnified optic, we were able to achieve groups in the 2- to 2.5-inch range.

Again, right now there are only two 458 AK builds like this in the world. And while this particular build isn’t listed on Tromix’s website, know that it has been done and therefore can be done again. For more information, visit tromix.com. And for more on top-notch receivers, visit sharpsbros.com.