Oh, you thought you had more time, didn’t you? But the shooting season is upon us, with warmer weather kicking off matches around the country. And if you’re looking to shoot your first match, or even up your game, the time is now to get ready for your match. A popular shooting sport, 3-gun competition continues bringing new shooters into the fold. 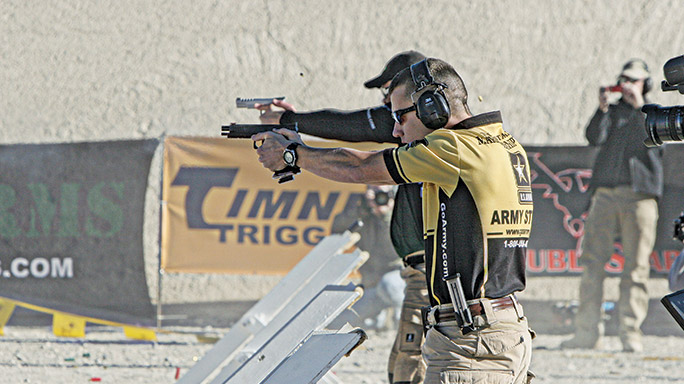 Jumping into 3-gun can pose one of the more intimidating leaps in all of competitive shooting. The sport combines the disciplines of practical pistol, rifle and shotgun, so it throws a lot at you. Add in elements of medium- to long-range rifle shooting, and the skill set required rises dramatically. But even shotgun adds elements of loading, slug selection and stage planning that requires much to master. And the gear–there will seem like a metric ton required to shoot your first match, so it can be a bit much for the maiden voyage.

But first, let’s start with a basic statement that somehow seems to ring true at ranges across the U.S. Just grab whatever guns and gear you have, find a buddy or the local match director, and just plan to show up. The community will get your through it. Shooters will loan you guns and belts and mag holders and more. It happens every weekend at matches big and small. So if you’re open to coaching and can operate firearms safely, just grab your gear and go.

Aside from that, there are some basics we can help point out. These suggestions will get you pointed in the right direction. Don’t go out and buy a bunch of gear. Instead, grab the gear you have and make that your starting point. Don’t worry about what division you’re in, and you certainly shouldn’t focus on winning. Now let’s jump into it.

It all starts with the pistol. At most matches, the pistol remains the one gun on your person most of the time. Holstered and loaded ready, you’ll shoot more pistol rounds, typically, at any given match. Any 9mm striker-fired handgun makes a solid choice to get started. A Glock 17, Springfield Armory XD, Smith & Wesson M&P–all make great choices. Meanwhile, the SIG Sauer P320 XFIVE Legion brings some high-end touches. You’ll want three to five magazines and mag holders if you got them. If not, load right out of the ol’ pocket if you have to.

At the top end, podium finishes often see competitors running 2011-based systems. From Staccato to Infinity, you can really spend over $4K on a high-end 2011. But a good one is worth every penny. The SIG P320 XFIVE Legion

For your rifle, the AR-15 rules 3-gun competition. But any modern, semi-auto. 223 rifle makes a solid choice. Whether it’s topped with iron sights, a red dot or variable-power optics doesn’t really matter for your first match. But if your local 3-gun match is lucky enough to have the space to setup long-range targets, a 1-6X variable scope can sure help with some early success. Whatever your sighting system, a solid 100- or 200-yard zero remains a must. Know your drops out to 400-500 yards if you have typical long-range distances on the schedule.

When it comes to shotguns, we’re talking about semi-auto 12-gauge systems. The Benelli M2 reigns supreme. Savage now offers a great 3-gun shotgun as well, and you’ll see a lot of folks running the Browning A5 as well. In limited divisions, pump-action shotguns still have a place as well, depending on the match.

But the biggest wave folks are riding lately comes in the form of box-fed semi-autos. A slew of affordable imports continue to change the game, with more folks jumping into open divisions. If you have a Saiga-based platform in your safe, grab it and jump in the game. If you want to really go big, Dissident Arms has the VEPR and Saiga guns on lockdown. They do a wonderful job taking those platforms and turning them into high-end competition machines.

For the most part, we’re talking the basics here. For rifle, FMJ 55-grain loads will typically do the job, though some prefer heavier bullets for long-range work. In fact, some competitors will get a good zero with heavier loads, then burn cheaper 55-grain ammo for up-close, hoser targets. Any hardball pistol ammo is fine, the cheaper the better in terms of expediency here. So long as it reliably runs your pistol, grab it and hit the range.

For shotgun, you’re going to typically be shooting a mix of steel targets and clay pigeons. So basic, affordable birdshot rules the day. A good low-recoil slug load will make your shoulder happy, taking on paper and steel during select stages.

One hard rule in competition shooting: no green tip, no steel core ammo. These bullet types harm or punch through steel targets. Make this mistake and you’ll not only get kicked off the range, but you’re on the hook to replace the damaged steel. And it’s pricey!

It takes a considerable amount of gear to keep three firearms up and running throughout the course of even a one-day local match. Go shoot a three-day major 3-gun event, and that load ramps up dramatically. Let’s start on the body. A good 3-gun system starts with a quality belt and holster. You don’t necessarily need to run right out and buy the best Safariland ELS system right off the bat, but you’ll want such if you keep on shooting.

Your pistol holster should focus more on retention than speed. This game requires running, jumping and crawling around sometimes to get into position. So retention remains paramount. The holster should obviously cover the trigger, but some systems come with wings to protect the sights as well.

After belt and holster, you’re going to want a mag holder for every magazine you will carry. Or in the case of shotgun, you need shell holders. Two spare pistol magazine holders will usually do the trick. A spare rifle mag holder, typically attached to the rear of the belt, provides insurance.

Shotgun loading comprises a game all its own. If you’re not running a box mag, then loading requires continuously stuffing individual rounds back into your gun. Load-2 and Quad-Load methods both achieve this at speed. Though you can certainly load one at a time as you get your feet wet. For affordable options in shell caddies, Taccom provides a full stable of options, from belt to chest rigs and more.

Of course, there’s a host of other stuff you’ll need in your range bag. Eye and ear pro are required, as are chamber flags on many ranges. A repair kit and extra small parts are often in found in the bag of experienced competitors. Sunblock, bug spray, and other niceties keep you from hurting. You’ll for sure want a cooler with lunch, plenty of water and snacks. You can’t always fuel up on the range in remote places.

In time, if you really start playing this game, you’re going to want to make some upgrades. A great place to start is with an upgraded rifle trigger. The Timney Triggers Daniel Horner Signature DH3 trigger seriously upgrades your Mil-Spec AR trigger.

A solid variable-power optic, with a true 1X low end, brings another game changer to performance. Optics continue getting better all the time, and there’s a host of quality 1-8X and 1-10X riflescopes on the market today, with reticles perfect for 3-gun shooting.

Finally, lean in and buy a lot of ammo and practice. While this may not sound like an upgrade, biting the bullet and buying ammo and range time is the biggest investment you can make in your shooting. Focus on the fundamentals, not speed. The speed will come in time.

If you’ve never really shot a match before, a great first step to getting into 3-gun should probably start with just a pistol match. Most 3-gun rules heavily borrow from USPSA/IPSC shooting. But IDPA matches can provide a starting point as well. In a pistol match, you get your first steps moving dynamically with a hot gun. The timer goes off and you learn to navigate a course of fire. Go through stage planning, shoot, move and reload, all under safe conditions.