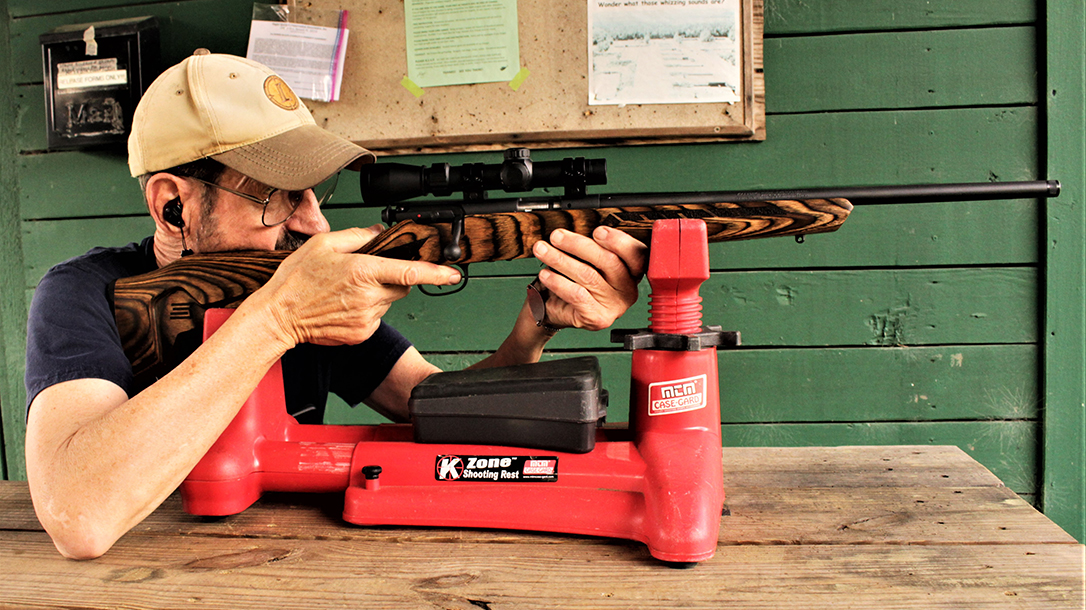 A .22 LR rimfire for survival? Really? We’ll get to the Savage Minimalist Mark II, but before we do, some context. 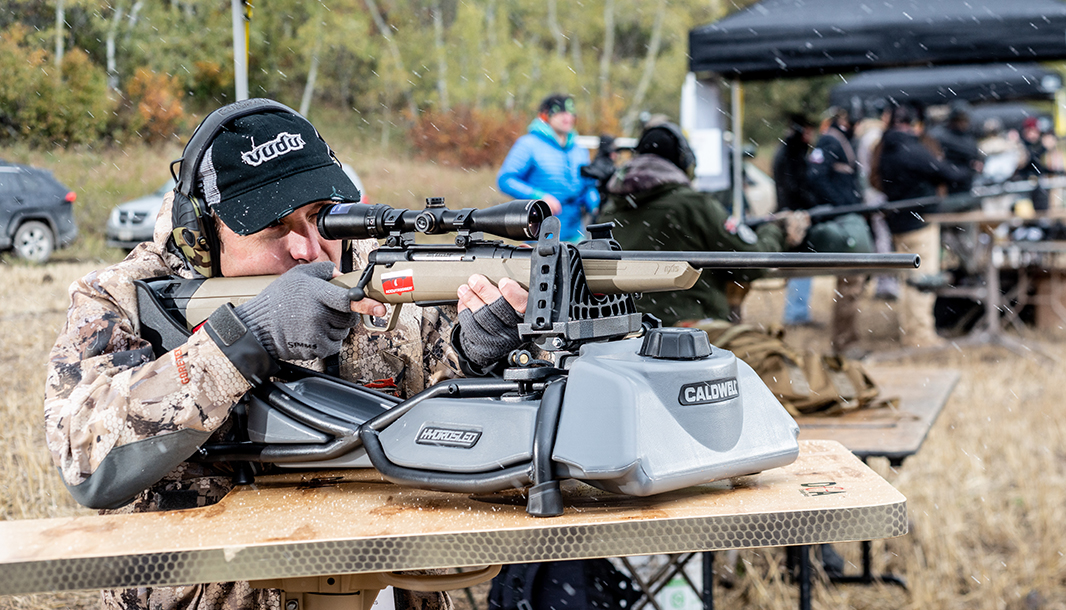 WATCH: The Savage Axis II XP Is Sub-$500 Rifle With a Bushnell Scope

Like other members of the duck-and-cover generation, I grew up with fallout shelters, tests of air-raid sirens, nuclear-war drills at school and frequent tests of the Emergency Broadcast System. Our parents, scoutmasters and teachers lived through the Great Depression and World War II. A good number were combat veterans who knew how to survive in extreme circumstances. Many others were civilians who learned to make do with shortages in times of economic catastrophe and war.

Fortunately, many of them passed this knowledge along. A lot of us also read books about pioneers and adventurers and went to the theater to see the latest “war movies.”

Some, like myself, read gun magazines. I particularly remember one gun article that made a strong argument that bolt-action rifles in .22 LR were the best long-term survival rifles after a nuclear war.

Today, nuclear conflicts are still possible, but other threats like terrorism, EMP weapons, pestilence and man-made or natural disasters increasingly dominate the threat profile. All of these can combine with explosive worldwide population growth and shatter our ever more complex and fragile supply chains, causing short- and long-term catastrophic disruption in national economies and profoundly disrupting the course of our technologically dependent daily existence.

.22 LR Rimfires and the Savage Minimalist

Think a moment. If you had to protect yourself and your loved ones and live off the land for months or years as you moved frequently to find safety, food and shelter, what rifle would you take with you? ARs and AKs are great when you have all the resources of an army to provide fresh ammo, lubricants and spare parts. But a .22 rimfire bolt-action rifle is so simple and rugged that it doesn’t require much maintenance.

In addition, a single person or a small family can carry a lot more .22 LR ammo than they could carry even the lightest 5.56mm NATO rounds. Furthermore, if you have to scrounge for ammo, there’s a lot more .22 LR ammunition in the world than ammo for even the most common military centerfire.

All of this makes sense, but what about hunting and self-defense? A 5.56mm NATO or 7.62x39mm semi-auto clearly has more power than the lowly .22. Also, both of these larger-caliber guns are much more effective at longer ranges. However, in a long-term survival situation, don’t expect much big game left; you’ll likely be hunting rabbits, squirrels and other small quarry. A .22 rimfire rifle is more than adequate for these animals. Furthermore, a .22 can take bigger game if its owner has good stalking and shooting skills, and the gun is accurate enough for a headshot.

As far as personal protection is concerned, the .22 LR is more effective than one might think in a survival situation. That’s because, in a world without ready access to antibiotics and trauma centers, any firearm is a powerful deterrent. In addition, a .22 rimfire rifle is a lot quieter than any centerfire, especially when used with subsonic ammunition and/or a suppressor. Those who can remain undetected and avoid unwanted contact will have a big advantage when moving through contested areas.

Of course, ARs and AKs can be very effective if you shelter in place and face multiple assailants. But there are other ways to augment your firepower while sheltering in place. Having a .22 semi-auto pistol is a good one. It uses the same ammo as your .22 rifle, and a polymer-framed .22 pistol doesn’t add much weight to your kit should you have to abandon your “permanent” retreat for a safer location or because food and/or water supplies have been exhausted.

There are a lot of .22 rimfire rifles on the market, but if you’re planning for long-term survival, a ruggedly built bolt-action rifle is still probably the best choice. That’s because its simple design makes it less vulnerable to breaking down in harsh environments, and it doesn’t require as much routine maintenance as other types of .22s.

The Savage Minimalist Mark II is a solidly built bolt-action that weighs only 5.5 pounds. Savage trimmed every unnecessary ounce from its satin-finished, heavy-duty, dark-brown laminated wood stock, which blends nicely into a variety of backgrounds. Savage also threaded the rifle’s 18-inch matte-black carbon steel barrel for a suppressor. Altogether, this is a stealthy rifle, especially when you consider that its bolt action can be manipulated very quietly.

The other features that make this rifle desirable are its button-rifled bore and its Savage AccuTrigger. Button rifling leaves the bore very smooth, which retards the buildup of lead, copper and powder fouling, all of which can significantly affect accuracy. All you’ll need to carry for cleaning and most maintenance of this rifle is a bore snake, a lightweight set of hex keys, a small bottle of light oil and a couple of small screwdrivers.

The AccuTrigger is a big advantage. The one on the sample Minimalist I received for testing broke very cleanly at 2.8 pounds and was extremely controllable when firing off-hand from a standing position. The blade in the center also acts as a silent second safety, which is a very desirable feature.

On the other hand, there are a couple of changes that would improve the Minimalist II as a survival rifle. First, it could use a set of back-up iron sights. The optic I chose is a very rugged Leupold 1-4X Mark AR variable scope mounted in lightweight but very strong Weaver Quad-Lock rings. This scope is highly unlikely to fail or shift in its mountings even if dropped. That’s important, but a set of iron sights is always worthwhile on a survival rifle.

The second feature I’d change is the lightweight external magazine and flat-spring magazine-release lever. Rough use could damage both of these. A survival rifle should have a very sturdy magazine and a push-button magazine release like the M1A. You can mitigate this issue somewhat by having several spare magazines. Spares are something that anyone using a magazine-fed survival gun should have, even if just for the purpose of maintaining a volume of fire. No matter how sturdy they are, magazines can be damaged, and their springs can take a set and lose their strength when they are constantly loaded to near capacity, so you should definitely have spares.

I tested the Savage Minimalist Mark II at the Flagler Gun Club using four different loads. They included CCI’s hyper-velocity 32-grain Stinger hollow point, Remington’s 40-grain round-nose Target load, Eley’s 40-grain round-nose Tenex target ammo and Winchester’s 37-grain Super Speed Super-X hollow point. The weather was a typical early spring day in Florida with winds gusting at 10 to 20 miles per hour. Fortunately, I was able to use the 50-yard firing position that was least exposed to wind. However, testing still needed to be limited to 50 yards because of the gusts.

I fired three five-shot groups with each load. I only reported the best group for each load here because the gusts opened up too many of the groups. The most accurate load in this rifle was the Stinger at 0.78 inches. Tenex’s best group measured 0.86 inches; the Remington Target was third with 1.14 inches, and Winchester’s Super Speed shot a best group of 1.41 inches. The Stinger boasts the highest velocity at a factory-rated 1,640 feet per second. It also produces 190 foot-pounds of muzzle energy, making it the most powerful as well. During the test, all loads functioned perfectly; there were no feeding difficulties, extraction or ejection problems and no misfires. Once sighted in, the scope maintained its zero, and the mounts and rings stayed securely in place. Lastly, the AccuTrigger was consistently precise.

In reality, long-term survival in primitive conditions presents many different challenges. Since a lot of those challenges are dependent on the actions of other people, much depends on the luck of the draw and the efficacy of your planning. Therefore, no one can say that one rifle or one cartridge solves all survival problems. Does this mean that the wisdom of the 1950s no longer applies? Certainly not, because the basic problems of long-term survival remain essentially the same today, except that these problems are now more difficult to solve due to technologically driven domestic and foreign population growth.

While no rifle is the perfect tool for long-term survival, one chambered in .22 LR will probably be the most useful for the survivalist. Therefore, that nearly 70-year-old article still rings true today. For more information, visit SavageArms.com. 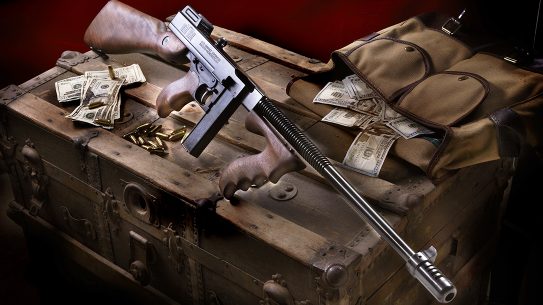 Auto-Ordnance has finally made the Tommy Gun available in 9mm in the form of...