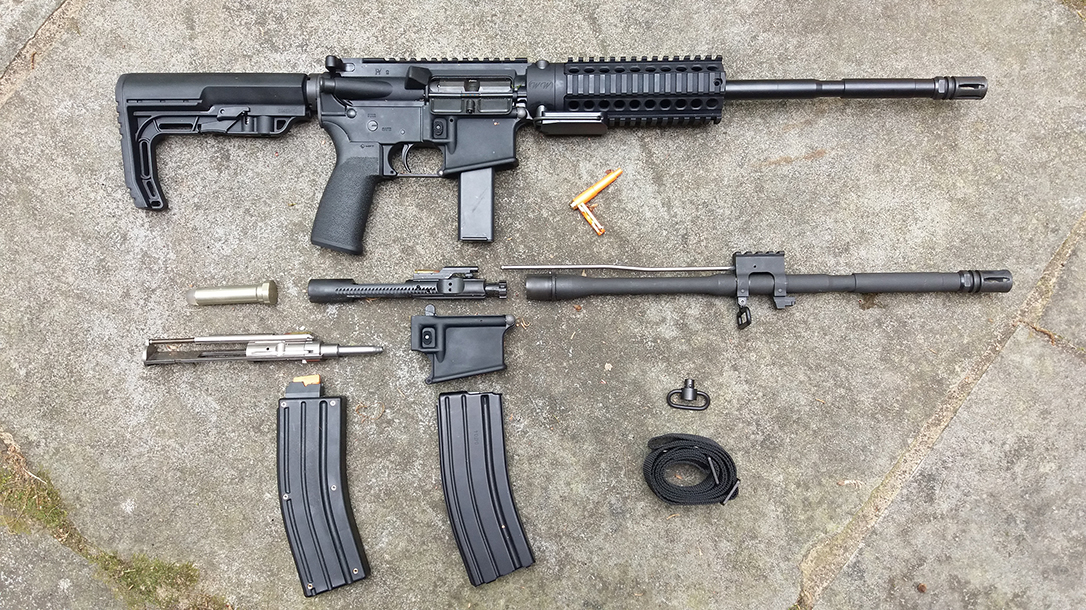 The only useful gun is the one you have with you when you need it. Selecting a bug-out-bag (BOB) gun is an exercise in extreme compromise to best address your individual requirements. It needs to protect and feed you and be light and compact enough to carry on your back along with all the ammo you’ll need as you leave trouble behind. Chances are good that you’ll be heading for less populated rural or wilderness areas and thus any resupply will be through barter or fortuitous discovery, so your BOB gun should be in a common caliber. Leveraging the modularity of the AR is probably the best way to minimize your compromises. This brings us to the Windham Weaponry RMCS-BOB. 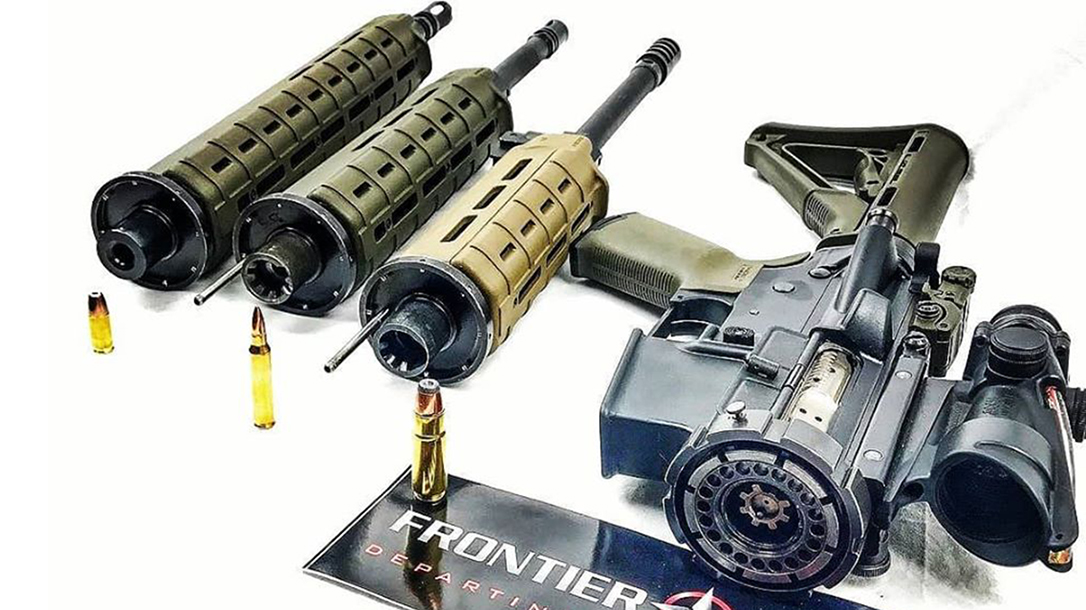 Windham Weaponry put a lot of thought and engineering into the BOB gun concept, the result being the MCS (Multi-Caliber System) rifle and a complete BOB system ready to stow in your trunk or closet until that terrible moment when you hear those three piercing, warbling tones that announce the Emergency Broadcast System on the radio. The BOB system includes a .22 LR/9mm/5.56mm adaptable carbine fitted into a rugged and spacious nylon backpack with some basic emergency supplies and room for plenty more. It’s a turnkey solution with an MSRP of $2,495. That might seem like a lot until you consider Windham Weaponry’s high quality and start adding up what you get for your money.

The heart of the Windham Weaponry BOB system is the MCS carbine, which is based on patents the company acquired to develop an accurate, strong, simple, multi-caliber takedown AR system exceptionally well suited to the needs of the survivalist. The MCS advances the AR’s modularity by allowing the shooter to change barrels (rather than complete uppers) and magazine wells quickly and easily to set the gun up for 5.56mm, 300 Blackout, 9mm, 7.62x39mm and .450 Bushmaster. The key to the MCS is a unique upper and lower receiver.

The lower receiver is in two parts: A universal trigger group and interchangeable magazine wells. This isn’t a normal receiver cut in half; it uses two separate forgings for strength and a slot and groove joint at the connection. The magazine release and the front triggerguard pin hold the magazine well in place. It is installed from above with the upper removed. Roll pins at the top of the slots in the magazine-well forging prevent it from sliding down and off the lower. It takes less time to swap mag wells than it does to explain the process. There’s some wiggle in it, but it is greatly diminished with the upper attached, and you would have to feel for it to notice it at all. Most ARs have a little wiggle between the upper and lower, and this one is tighter than many.

I have no concerns about the strength and wear resistance of the receiver connection joint. Between the use of forgings and surface-hardening anodizing, I wouldn’t expect the joint to loosen up in my lifetime, even if I changed the magazine well twice a day. However, the trigger group portion of the lower is more susceptible to cracking damage from dry firing without the bolt in place than a standard one-piece receiver because the web where the hammer falls is about half as thick.

The flattop upper-receiver forging has a massive 2.26-inch-diameter boss on the front that supports the dual-latch barrel-mounting mechanism and serves as an exceptionally rigid and strong mounting and indexing base for a 6-inch free-floating aluminum handguard with an Mil-Std-1913 rail at 12, 3, 6 and 9 o’clock. Short of a monolithic receiver, I don’t think there’s a stronger handguard setup than this. The handguard is held in tight-fitting upper and lower indexing slots with four Allen screws.

Windham Weaponry clamped the barrel into the receiver with two arms that rotate twin claws around the rim of the barrel extension. The arms are squeezed and held tightly in position by a polymer barrel retainer; it slides over them along the bottom 1913 rail. The retainer is held tight with a heavy wire bail that snaps over the tops of the locking arm pivots.

Removing the bail is the hardest part of changing the barrel. It’s virtually impossible to do with your fingers alone, but it’s easy with a screwdriver for leverage. As loose as the barrel feels before you slide the polymer retainer on, it’s amazing how solid it is when locked down. I detected no wiggle. More importantly, during my accuracy tests at 50 and 100 yards, there was no observable point-of-impact shift from removing and reinstalling the barrel, regardless of which arm was turned first. That’s some precision machine work.

Recognizing that shooters have their own muzzle-device and sight-system preferences, the BOB MCS comes with an A1 or A2 birdcage flash-suppressor and no sights. A survival gun is not a sporting arm. The demands placed on it to live outdoors in all weather and endure rough handling give it more kinship with military arms. Strong iron sights are close to indestructible but relying on them for primary sighting is foolish when there are so many solid optics to choose from that can help compensate for shooter inexperience and the physical limits of your vision.

A red-dot sight is easier to use in fast shooting than iron sights or conventional scopes because it doesn’t obstruct as much target area, permits the shooter to focus completely on the target and doesn’t need a precise cheekweld on the stock or specific eye-relief distance to aim.

The tough and compact Bushnell 1x25mm Mini Cannon red-dot sight is a great choice for a survival application. It weighs 6 ounces and is 3 inches long, both shockproof and waterproof when submerged and nitrogen filled so it won’t fog up when the temperature or humidity changes. It has four reticle options (dot, circle and dot, crosshair and dot, circle crosshair and dot) with 11 brightness levels controlled by two buttons. Powered by a single lithium-ion CR2032 battery, it can run for an average 2,100 hours at medium brightness (setting 6). That’s a lot of battery life. A CR2032 cost around $2, so it’s feasible to pack enough without breaking your back or the bank. The sight has two capped turrets and 0.5-MOA click adjustments you can make with the rim of a cartridge case.

The red-dot’s lack of magnification is advantageous in close-range tactical encounters but a disadvantage while hunting, so I added a Bushnell 3X magnifier behind it. It’s just as rugged as the sight and includes a heavy-duty, spring-loaded, one-hand-operated swinging mount that holds it solidly in place or off 90 degrees to the side where it can be used as an independent monocular.

Nothing beats a laser sight for close-range, indoor and low-light tactical encounters. In darkness, a tactical light is a must for effective aimed fire. Without a light, you’re shooting blind. Crimson Trace’s wireless LiNQ combination green laser sight and 300-lumen tactical light covered both requirements in a compact, simple-to-use system unfettered by wires and pressure pads that adds only 6.4 ounces to the rifle. The LiNQ consists of a 2.5-inch-long aluminum-cased light/laser unit and a special pistol grip that controls both on/off and the four modes of operation (laser only, light only, light and laser, laser and strobe).

The LiNQ has the durability and water resistance for rugged outdoor use. It can withstand immersion in a meter of water for half an hour, and if you can’t figure out how to get above water in 30 minutes, you probably aren’t going to survive anyway. It operates on two lithium-ion CR123 batteries providing two hours of light. I mounted the LiNQ’s light/laser unit on the bottom front handguard rail where it served to prevent the polymer barrel retainer from slipping off the front of the handguard while changing barrels and provided a nest for my supporting hand while shooting.

The final accessory I added was a Tactical Brass Recovery (TBR) Operator Model brass catcher because handloading your own ammo after the fall of civilization requires components, and there won’t be any brass-drawing mills in operation. The TBR is the only brass catcher I’ve ever used that’s practical for field use and really works. It mounts to your 3 o’clock 1913 rail with a secure, quick-detachable fixture, and it’s designed to fold flat to save space in your gun case and swing out of the way when not needed. At 14 ounces (plus the salvaged brass), it’s no lightweight, but it’s tough and top quality. But when the situation allows, I want it to conserve the spent cases I need to keep my gun shooting.

The Windham Weaponry RMCS-BOB comes equipped for 9mm (close-in defense), .22 LR (small game) and 5.56mm (large game/long-range defense). The base rifle has a direct-impingement 16-inch, 1-in-9-inch twist, chrome-lined M4-profile barrel, a minimalist Mission First Tactical six-position buttstock and an aluminum 30-round magazine. It packs in the rear section of the backpack with the upper and lower separated. The 9mm adaptation uses a separate buffer, bolt, 1-in-10-inch twist Melonite-finished barrel, magazine well and Colt-style steel 9mm magazine. The .22 LR uses a CMMG adapter and magazine. Each of these components is secured by straps or repositionable pockets inside the pack.

To address the varying points of impact of 9mm, .22 LR and 5.56mm, I zeroed the laser for 50 yards with Black Hills Honey Badger 124-grain 9mm. (This Phillips screwdriver-like-tipped, solid-copper bullet has better penetration than hollow points with just as much tissue disruption and shoots quite accurately in the MCS.) The green laser helps for quick, close-range shots from any position. At longer range, I could pick up the green laser dot through the Mini Cannon optic with or without the 3X magnifier in place.

Since it can be hard to spot a squirrel beyond 50 yards, I also zeroed for .22 LR at that range (but with the red-dot sight) and marked the zero on the turret base. I found my most accurate .22 LR shot about 7 inches higher than the 9mm at 50 yards.

The MCS rifle is impressive, and it tends to overshadow the rest of the Windham Weaponry BOB system. The backpack itself, a special build for Windham by Elite Survival Systems, is well designed with plenty of room for extra supplies. It has a padded, vented back with chest and waist straps. In addition, the 35-item mini survival kit inside is fairly comprehensive for short-term use. It includes medical, fishing and trapping, navigation, fire-starting and shelter, water-purification and general-repair elements. For more information, please visit windhamweaponry.com.

Bullet weight measured in grains, velocity in fps by chronograph and accuracy in inches for best five-shot groups at 50 yards for 9mm and .22 LR and at 100 yards for 5.56mm. 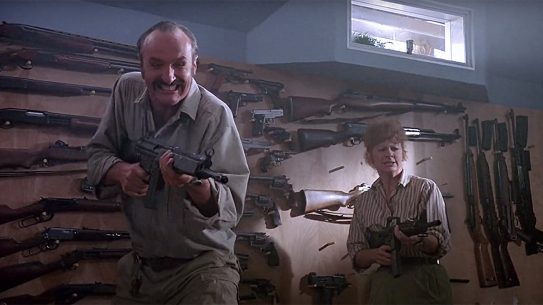 From bolt-actions to shotguns to an elephant gun, the Burt Gummer 'rec room' from...