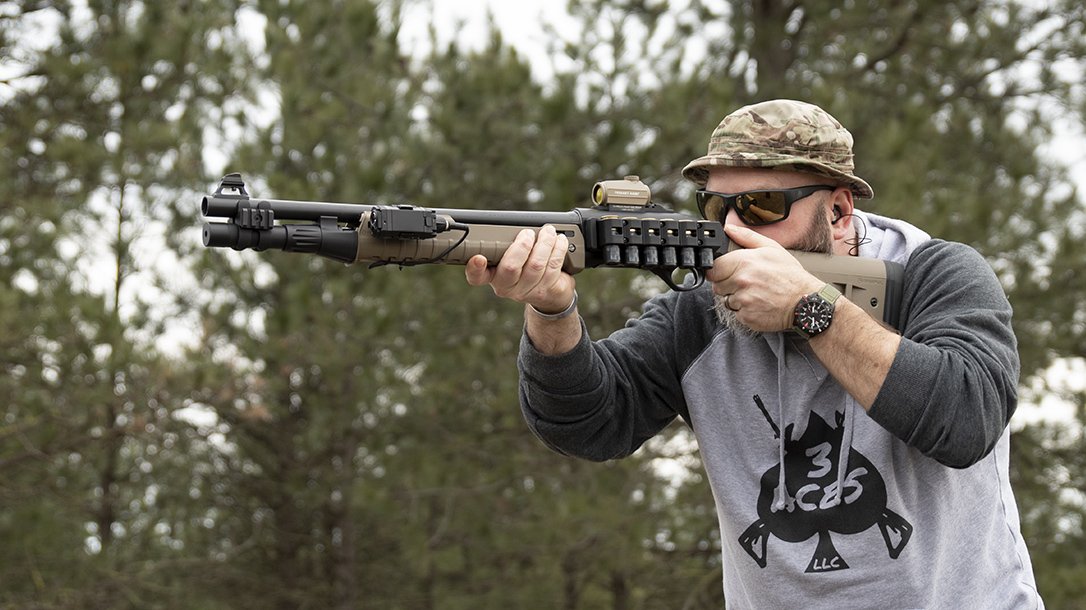 I’ll admit that I wasn’t always a shotgun guy. My experience with shotguns was limited to an old Remington 870 pump action from the 1970s that my police department issued me. I think it was older than me by a few years at the time. But I have run an older Beretta semi-auto, which is what piqued my interest when that Italian maker unveiled the semi-auto 1301 Tactical 12 gauge back in 2018.

It also helps that Beretta has been making quality firearms in some form or fashion since 1526, making it the oldest continuously operated gun manufacturer in the world. With all that experience, the company knows how to get things done.

Beretta designed the 1301 Tactical specifically with law enforcement and personal defense in mind. In its factory form, the aluminum receiver and synthetic stock are both shorter than those on the 1301 Comp Pro for an overall length of 37.8 inches with an 18.5-inch barrel and a 13-inch length of pull. Of course, you can always adjust the length of pull using spacers. But this relative compactness helps the 1301 Tactical handle very well in confined spaces.

The heart of the platform is Beretta’s innovative BLINK gas piston operating system, which was developed over many years of research and development with the company’s waterfowl guns. It essentially evolved from the 391 Xtrema system, and Beretta claims that it makes the gun 36 percent “faster than comparable gas and inertia systems while remaining reliable with a variety of different loads.” I can attest to that last part, as my 1301 Tactical has cycled everything I could conceivably throw at it.

On top of that, the gun comes with a 4.5- to 5-pound trigger with an impressively smooth pull and a short reset. Beretta includes an oversized bolt release, safety and charging handle, aggressive checkering on the forend and wrist, an interchangeable front sight, a ghost-ring rear sight and a Picatinny rail for optics. Altogether, the all-black 1301 Tactical weighs in at 6.3 pounds unloaded and holds 4+1 rounds of ammo, and the model I picked up had a black Cerakote finish on the barrel thanks to 3 Aces LLC of Spokane, Wash.

Even though the Beretta 1301 Tactical is a great gun out of the box, some customization was in order. For this, I turned to Aridus Industries, which provided a few upgrades to transform the fast-handling scattergun into a ’roided-up powerhouse.

First, the company added its 1301 Handguard Assembly, which is actually adapted from a Magpul Zhukov forend to fit Beretta-style shotguns. It features M-LOK slots so you can easily add accessories. Aridus includes a stainless steel shield to protect your support hand from heat and excess gases.

Aridus also recognized that not everyone has the same build or arm length. So, the company designed the ASA-1301 Stock Adapter; it allows you to install one of Magpul’s SGA stocks for Mossberg 500/590 series shotguns. Equipped in this manner, you can adjust the length of pull as well as the cheek height. The design is super adaptable and ergonomic, with built-in sling slots on both sides.

Then there’s the Universal Q-DC from Aridus, a quick-detach sidesaddle that holds six rounds and sticks to the receiver. Not with any pins or screws but “high-bond” 3M double-sided tape. This is what makes the Q-DC “universal” and allows it to fit on a number of shotguns. The company states that the adhesive will work in conditions ranging from -30 degrees to a blistering 230 degrees Fahrenheit. Proper prep work is crucial, of course, but I have no reason to doubt that claim. The thing never moved when I tested the Beretta 1301 Tactical out in the blistering high-desert sun, shooting and reloading as fast as I could. I’m afraid an act of Congress couldn’t get the Q-DC to part ways with the Beretta. Another bonus is that the shell holders are detachable and will easily fit into any standard AR-type magazine pouch.

Finally, Aridus sent along its Aimpoint Micro Co-witness Ready Optic Mount (CROM) for the Beretta 1301 Tactical. The CROM replaces the factory Picatinny rail and rear sight and mounts directly to the gun’s receiver. This positions the optic much lower, allowing for a solid, more consistent cheekweld. The integrated XS ghost-ring rear sight is also faster and easier to use with a red-dot sight installed, even if the optic malfunctions.

Speaking of red dots, it wasn’t long ago that Primary Arms released its SLx Advanced Rotary Knob Microdot in both black and Flat Dark Earth. To match the new stock and handguard on my build, I chose the latter edition. The SLx features a 2-MOA dot, 11 brightness settings, a 50,000-hour run time using a CR2032 battery and a lifetime warranty; that’s all for $130. It’s quite a steal, and I’ve run the SLx on an FN SCAR—known for eating optics—and it’s still alive. So I have faith in this optic.

I also installed the Viridian X5L-RS, which pairs a powerful green laser with a blinding 500-lumen Cree LED light. It rides on the handguard, not on a short forward rail, because it utilizes a tape switch. It took some work to install it, but I couldn’t be happier with the results. The X5L-RS offers “instant-on activation” and six operating modes. Another cool feature is that the batteries are rechargeable and hot swappable.

My range time with the Aridus-modified 1301 Tactical was nothing short of a blast—pun fully intended—especially with the oversized safety and charging handle. And thanks to a Nordic Components MTX extension kit, the Beretta now holds seven 2.75-inch shells in its magazine tube, plus one in the chamber. I have yet to have an issue with the shotgun, as it feeds flawlessly. The extension kit also comes with a barrel clamp that has a Picatinny rail on one side and a sling swivel attachment on the other.

As much as I tried to overdrive the Beretta at the range, it just wasn’t possible. I wanted to nickname it “Mikey” because “He likes it!” This thing ate literally whatever I fed it. Perhaps I should have tried to feed it some cereal.

During that first range session, I tested 10 different loads; those included buckshot, birdshot, slugs, and Hornady and Federal personal-defense loads. Once I dialed in, I couldn’t get the shotgun to stop.

Did I mention that the recoil is a lot lighter than my trusty old 870’s? This is due to the BLINK system, which makes for a smooth- and soft-shooting 12 gauge.

To prove this point, I handed the upgraded Beretta to my 21-year-old daughter so she could give it a try. She ended up rocking it like an AR, engaging various targets while advancing. It’s worth noting that she’s 5 feet tall and 115 pounds of sassy mischief. Seriously, this shotgun didn’t make her skip a beat. So I don’t want to hear any dudes out there complaining about a sore shoulder.

Center-mass and headshots were a cinch, and accuracy wasn’t an issue with the majority of the loads tested. My hits with Federal’s Vital-Shok TruBall Deep Penetrator rifled slugs were so close to each other that I didn’t feel the need to involve a tape measurer. Hornady’s Critical Defense 00 buckshot was light on recoil and made fist-sized holes in the target board. If it had been a bad guy, he would have been a human sprinkler by the time the Beretta 1301 Tactical ran dry.

With the Beretta 1301 Tactical complemented with the Aridus Industries and Nordic Components upgrades, not to mention the Primary Arms optic and Viridian light/laser, you just can’t go wrong. The setup is still light enough for 3-Gun competitions. Equipped as is, this would make an exceptional duty shotgun for law enforcement and would be great for personal protection.

On its own, the Beretta 1301 Tactical might just be the most perfect defensive shotgun on the market; the customizations here just made it that much better. Running a magazine of mixed shells, the gun seemed to laugh and say, “Is that all you got?” For more information, please visit the following sites:

This article is from the April/May 2020 issue of Ballistic Magazine. For exclusive content, grab your subscription at OutdoorGroupStore.com. 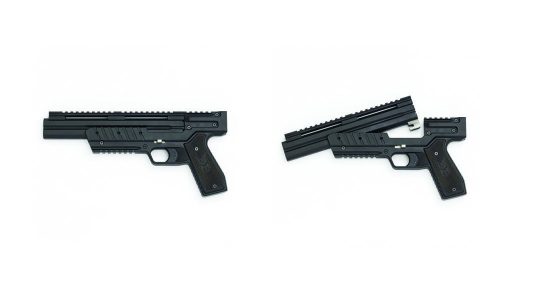 Available in .410 bore and .50 caliber black powder, the Detonics Carbine Pistol is...