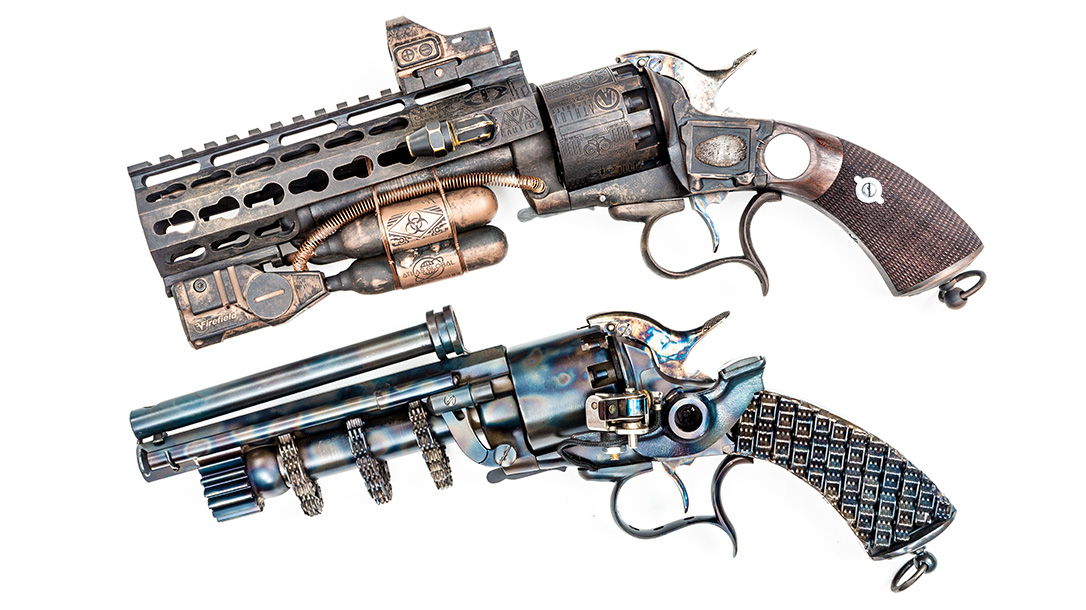 Photo by Alex Landeen
The top is Outlaw Ordnance's submission, while the bottom is from Odin's Workshop.
Comment(s)

Want to win a custom LeMat revolver? We have two up for grabs. Read the sci-fi story below for a better idea of how they came together, or scroll to the bottom to enter.

The Man stood looking out over the valley, his synthskin duster waving gently in the afternoon breeze, his hands resting on the butts of two large pistols: The Outlaw and Odin. He scanned the red-brown rubble spanning the horizon. Here and there, small wisps of smoke poked black fingers into the yellow-gray skyline. 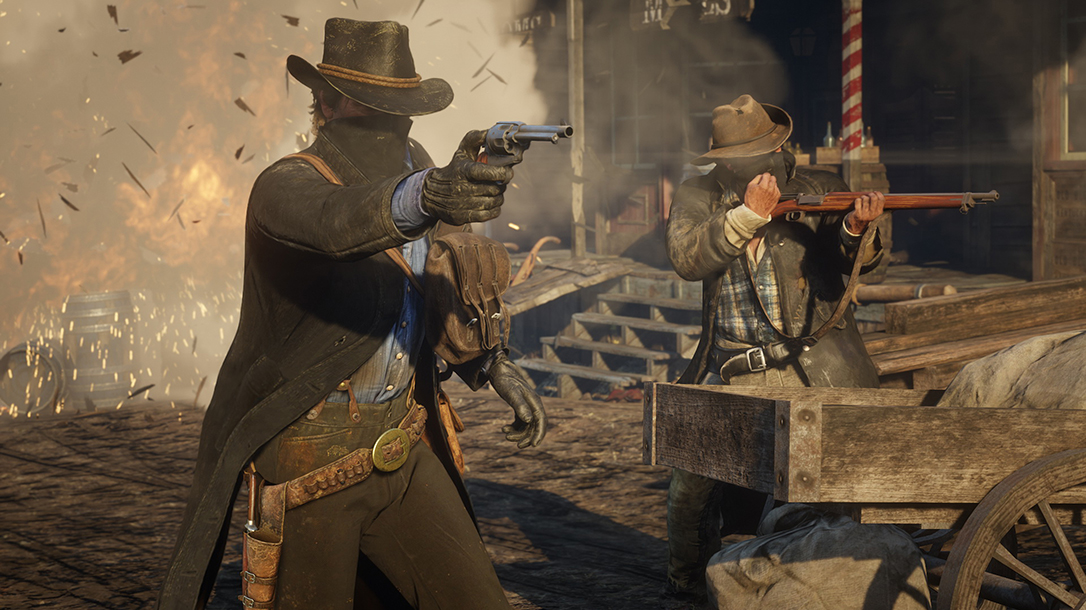 Long ago, The City sparkled like a mile-high diamond, the pinnacle of human achievement. We had reached out, spread ourselves across the stars, terraforming planets, destroying and rebuilding, carving our name into the bark of the galaxy, only held back by the laws of physics.

No one could have predicted what would happen when The City’s top scientists opened the portal. It was supposed to be the next step—dimensional travel, a way around the limitations of light speed. It was a door the scientists so badly wanted to open. They had been knocking on it for years. But they never expected anyone to be home.

When the portal machine was finally turned on, those in close proximity—most of The City’s residents—died immediately. In some respects, they were the lucky ones. In the blink of an eye, everything changed. Earth was thrown into chaos. AIs tasked with controlling every aspect of society went dark. Tube transports failed. Skip-planes shut down—some falling to earth, others carrying their occupants forever out into space. Everything electronic sputtered and died. Satellites streaked across the sky, burning in the atmosphere. War and famine followed: The new normal. Then the space ladder failed. The elevator cable winding its way around the equator like a great angry snake, until finally the anchor asteroid struck with meteoric force. The dust from the impact thrust the planet into a decades-long winter. All the while “The Signal,” as it was called, kept broadcasting. Then one day, it just stopped.

Nobody knows why it stopped. It had been going for the better part of a century, but it didn’t matter. What mattered was the fact that now The City was open. For over 100 years, the resources of the world’s metropolis had been completely off limits—instant death awaited anyone stupid enough to risk getting too close.

Now, in 2389, it was once again bustling with activity, but of the nefarious kind. The Man drew his pistols and checked their charges again, even though he knew they were ready to go. Like most everything in this world, the guns were hand-me-downs. Thankfully, the outland raiders he had trapped didn’t put up too much of a fight.The guns were functional but definitely needed some work. He was able to trade two month’s rations to a couple of underground custom shops to have them upgraded.

The Man’s workhorse was the Outlaw, an old nine-shot Athlon Security piece. The custom shop guys, Nacho and Cheeto, added a fingerprint activator in case the gun fell into the wrong hands. They also installed a gas assist that automatically rotated the cylinder for faster firing and powered the 15mm grenade launcher located under the main barrel. More upgrades included an optics rail and a rebuilt targeting laser. Nacho and Cheeto then finished the whole thing off in Armor Black and Patriot Brown Cerakote for durability. After all, the Outlaw was built to be fast and destructive.

The other pistol, the Odin, was built for precision. For this custom job, The Man turned to James Dennis, who was known for his welding and torch skills as well as his ability to make anything out of old motorcycle parts. Joining Dennis was Nick Lubriaz, a welding king, and Dennis’ brother Cole whose flame anodizing skills couldn’t be touched by anyone from any realm. The pistol’s grip had been mostly destroyed in the explosion that got the raiders, so James replaced it with timing chain links for added weight. Other steel pieces were welded on for balance and heat dissipation. The sighting tube was calibrated for longer distances, and the thumb rest operated the stabilization servo-chains located under the barrel. James finished the Odin off with flame anodizing and clear Cerakote to keep everything protected and functional.

The Man now stood on the hill, looking out over The City. Maybe someday we will rebuild, he thought, come back to the glory we once were. Play it a little safer this time. Stay in our galactic lane. Maybe it could happen.

But right now, it didn’t matter. Right now, he needed supplies. He cocked the hammers on the Outlaw and Odin, and set off down the hill.

As you can tell from my little intro there, I’ve always been a fan of science-fiction. Dystopian or utopian—give me a cool story set in the future and I am all in. And when I saw what Outlaw Ordnance and Odin’s Workshop did for this “Custom Challenge,” I was inspired. Everything I love about dystopian sci-fi stories was painted, engraved or welded onto these two pistols, which started as Pietta-made LeMat revolvers from EMF Company.

The finished Outlaw Ordnance piece arrived at my house first. Opening the box was breathtaking. I knew that the custom shops only had these guns for about a week, but the amount of work that went in was wild.

The details on the Outlaw’s cylinder are perfect, and the “Athlon Security” addition gives it a fun backstory. The thumbprint security pad with the battery is a cool touch, too. The distressed coating is a combination of Patriot Brown, Armor Black and tan Cerakote.

The KeyMod rail, necessary for adding the optic and laser, was modified to fit and installed with two hex-head screws. As Outlaw Ordnance’s Chip “Cheeto” Pierce said over the phone, “We were told as kids that lasers were the future.”

They also added CO2 cartridges as a thought that maybe in the future there would be some technology of adding gas to the black powder to create a faster projectile. I thought it would be cool if the gas was used to self-cock the pistol upon firing and pressurize the inner shotgun barrel, which in my case would become a grenade launcher.

Soon, the Odin’s Workshop gun arrived. It left me amazed yet again. Beforehand, I spoke to Odin’s James Dennis, who knew the Outlaw guys would turn to engraving, so he went a different route. He wanted everything he added to be weldable, which meant steel. He gathered a bunch of old motorcycle parts for his LeMat revolver and Odin’s Nick Lubriaz went to work. The timing chain on the grip looks fantastic, and I can’t imagine the amount of time that took.

They also added an “accelerator pedal” thumb rest made from a rocker arm off a four-stroke dirt bike. James told me that he actually thought of adding a rail, but you can’t weld aluminum to steel, so he abandoned the idea. He also wanted to leave the pistol fully functional, which meant leaving the pushrod on the gun, which Outlaw had removed.

James said that Odin’s Workshop doesn’t advertise much in the way of flame anodizing, which is how his brother Cole got the coloring on the steel, but he wanted to show what they could do in this regard. After seeing it, I think it came out great, especially with the clear Cerakote on top. As James put it, “I put my soul into that gun.”

For more information on the base LeMat revolver, please visit emf-company.com. Interested in custom work? Check out outlawordnance.com and odinsworkshop.com for more amazing work from these top-notch firearm artists. Also, be sure to grab a copy of the June/July 2020 issue of Ballistic Magazine at OutdoorGroupStore.com.

Enter here if you are having trouble entering from the form above. 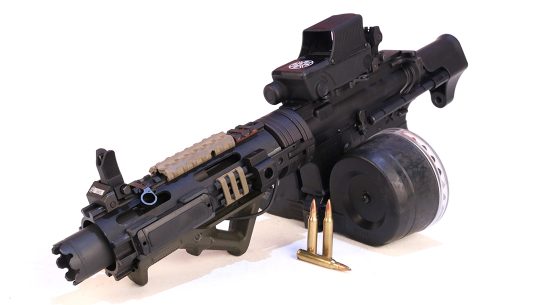 Survival weapons are important during uncertain times, and one author's Ruger-57 and homemade 100-round... 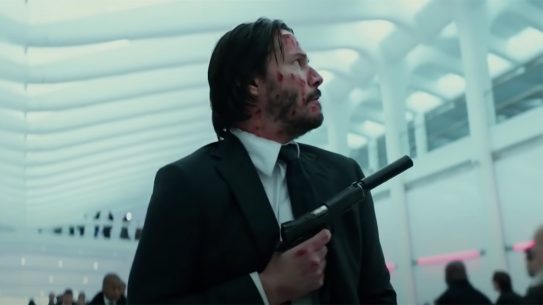 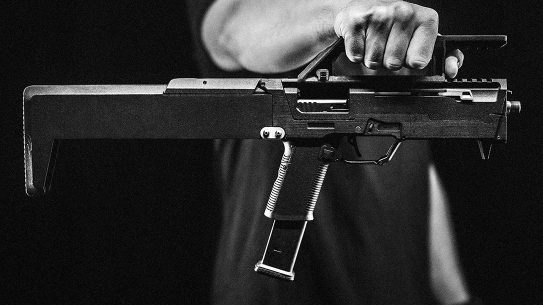