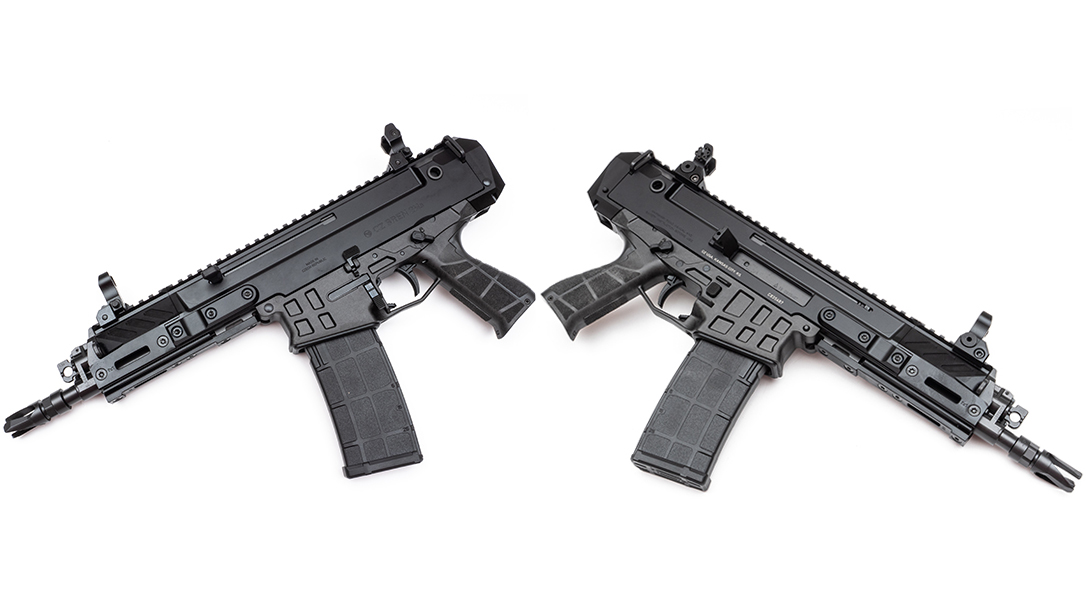 Six years ago, CZ introduced the 805 Bren S1, the civilian version of the rifle that replaced the venerable Vz. 58 for the Czech Republic’s military, to the American public. The S1 started selling to U.S. customers in 2014 as a pistol variant. The carbine version soon found its way to our shores a couple of years later. Though the CZ 805 Bren was well received overall, there were a few things that designers felt could be improved to create an even better weapon, and the genesis of the Bren 2 began. Fast-forward to 2019 and history repeated itself, as CZ-USA recently released the CZ Bren 2 Ms pistol to the American shooter. Meanwhile, CZ announced a carbine version to kick off 2020. We’ll focus on the pistol variant here. 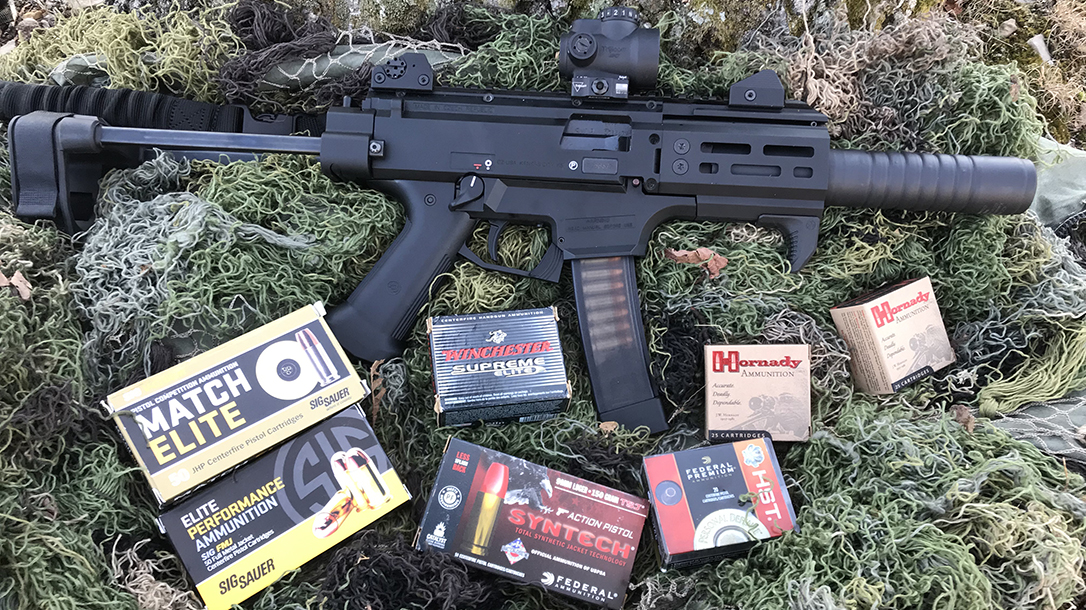 While closely resembling the original Bren 805 pistol, the Bren 2 Ms bears quite a few significant changes to improve the user experience. First, the “Ms” designation stands for “Modular semi-auto” since the Bren 2 is available in multiple calibers, and users can switch barrels and forends to suit their missions.

Currently, the Bren 2 Ms pistol is available in 7.62x39mm and 5.56mm NATO with a few different barrel lengths. The 5.56mm version employs STANAG (AR) magazines while the 7.62x39mm pistol uses proprietary magazines. The sample I received for review was a 5.56mm model with an 8.26-inch barrel.

The anodized aluminum upper receiver has been trimmed down in size from the original, and the lower uses carbon-fiber-reinforced polymer, all adding up to substantial weight savings. Another difference is the AR-style bolt release paddle on the left side of the rifle that’s easy to access and operate. Additionally, CZ has also included a bolt release inside the front of the triggerguard to assist left-handed shooters.

Other smaller, but impactful, changes include interchangeable backstraps for the pistol grip, and the rear of the Bren 2 Ms has a flush rear plate that allows you to attach an AR-style buffer tube. This is handy for those who want to add a pistol brace or a full stock after registering the gun as an SBR.

The Bren 2 Ms features a chrome-lined, cold-hammer-forged barrel that wears a three-prong flash suppressor and a nitride finish for protection against the elements. The pistol also carries over the short-stroke gas piston operating system of the original along with a three-position gas adjustment. You can adjust the system for regular and adverse conditions, or turn it off completely for single-shot usage.

The Bren 2 Ms also comes with an excellent set of folding combat sights. The rear sight includes selectable apertures for either fast shooting or precision at a distance. Other appointments include two 30-round factory magazines, both clip-on and QD sling attachment points and M-LOK slots for the addition of accessories—the next step. 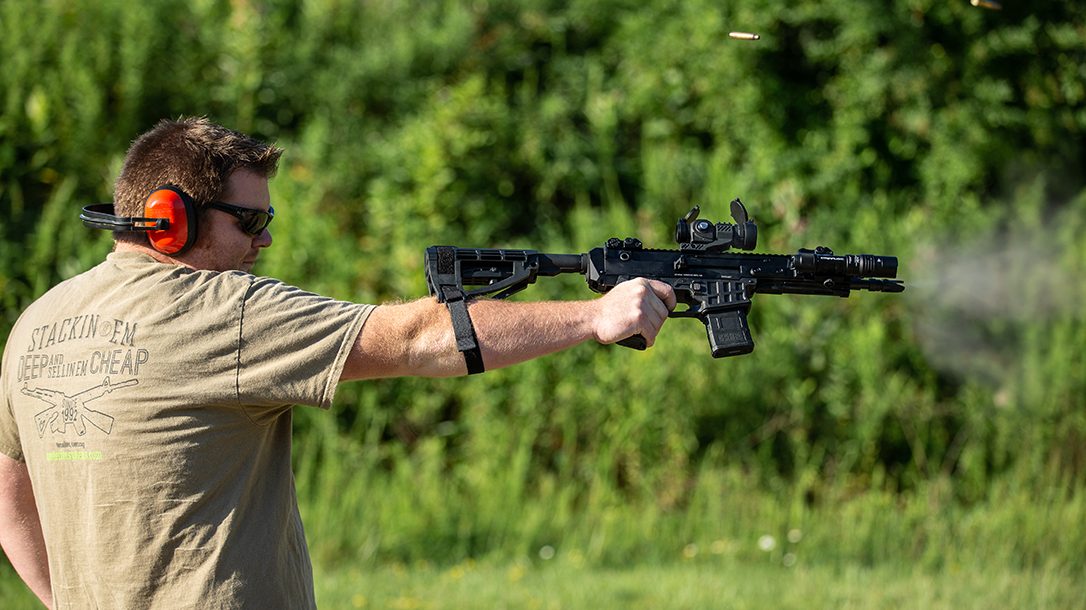 As it ships from the factory, the Bren 2 Ms is an impressively equipped weapon with great styling and professional specifications. However, with its capacity to be accessorized, it was just begging to be dressed up with some more personal touches. The first stop was SB Tactical and the company’s new SBA4 stabilizing brace.

A true innovator in the AR accessory market, SB Tactical modeled the SBA4 after its original SBM4 brace. Updates to the SBA4 include a QD socket for a sling-attachment point and a five-position adjustment system. The SBA4’s build quality was superb. It included a mil-spec buffer tube for easy, two-minute attachment to the Bren 2 Ms with a user-supplied end plate and castle nut. While the SBA4 was a low-tech add-on in comparison to a light/laser or optic, it was by far the most impactful change, as it greatly enhanced the pistol’s overall versatility.

I wanted to add a sling and a few more accessories, so I then turned to Magpul. For this review, Magpul offered up a few add-ons, including the MS3 Single QD GEN2 sling, an MS1 MS3 QD Adapter, a few aluminum M-LOK rails and an RSA QD sling mount. I requested the MS3 sling because it can be used as both a single- and two-point design. It also incorporates a quick-adjustment slider and features a ferritic nitrocarburizing finish on the hardware for extra protection against wear and corrosion. 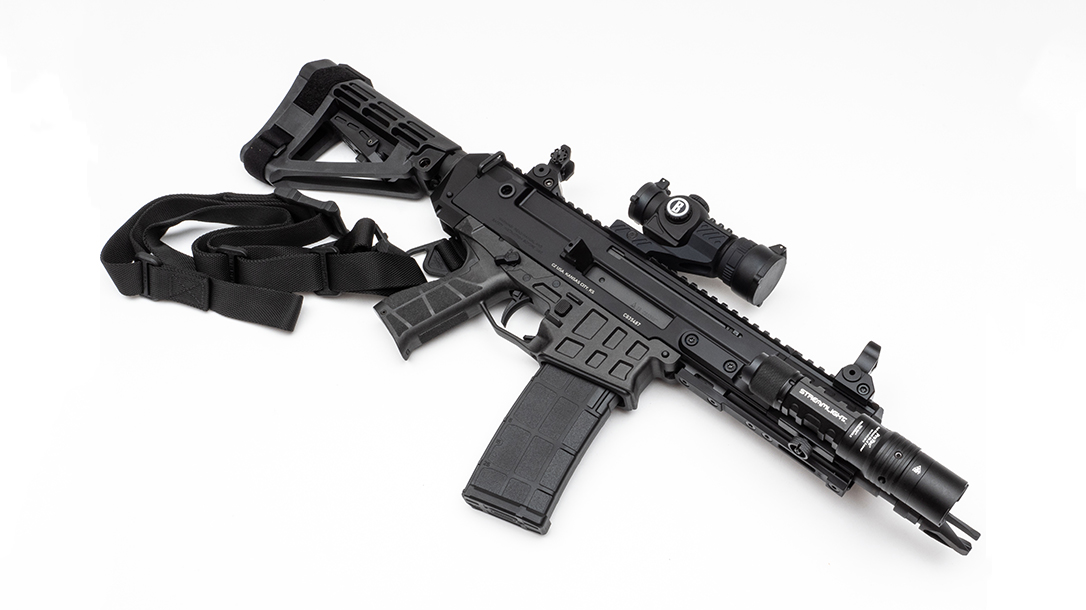 Next, I needed an optic, and Bushnell came through with the Elite Tactical CQTS 2.0. Ready to roll right out of the box, the company’s flagship red-dot sight came installed on a cantilever Picatinny mount with a 30mm ring. The CQTS 2.0 is robust and everything about its construction just screams quality. It’s also water-, shock- and fog-proof, and users can choose between four different reticles, including a single dot, a circle and dot, a crosshair and a circle combined with a crosshair. The elevation and windage are adjusted in 0.25-MOA increments, and the battery life is rated at more than 50,000 hours depending on the reticle and which of the 12 brightness settings is used.

My final addition was Streamlight’s new ProTac Rail Mount HL-X light/laser unit. This multi-fuel offering runs on either Streamlight’s rechargeable 18650 USB battery or two plain CR123 batteries. It generates 1,000 lumens of white light from the LED on the high setting and 60 lumens on low. It also features a red laser for more precise shot placement. With the rechargeable 18650 battery, the ProTac’s light has a run time of 1.25 hours on high and 23 hours on low. The ProTac ships with both a regular two-button tail cap, as well as one with a cable and pressure switch for easier access while gripping the weapon. The ProTac also comes with Streamlight’s Rail Grabber Picatinny mount, which is quick and easy to install.

If I had to pick one word to describe the experience of shooting the Bren 2 Ms pistol, it’d be “sublime.” The pistol offered all of the qualities of the original 805 Brens I tested in the past, such as excellent accuracy, phenomenal reliability and a buttery-smooth action. However, enhancements like the AR-style bolt release and non-reciprocating charging handle, combined with the lighter weight, put the pistol over the top.

That wasn’t just my observation, either. Aside from my normal shooting companions, other people lined up at the range to shoot the little marvel. The Bren 2 Ms pistol got more attention and favorable comments than just about anything else I’ve had out at the range in the past couple of years. 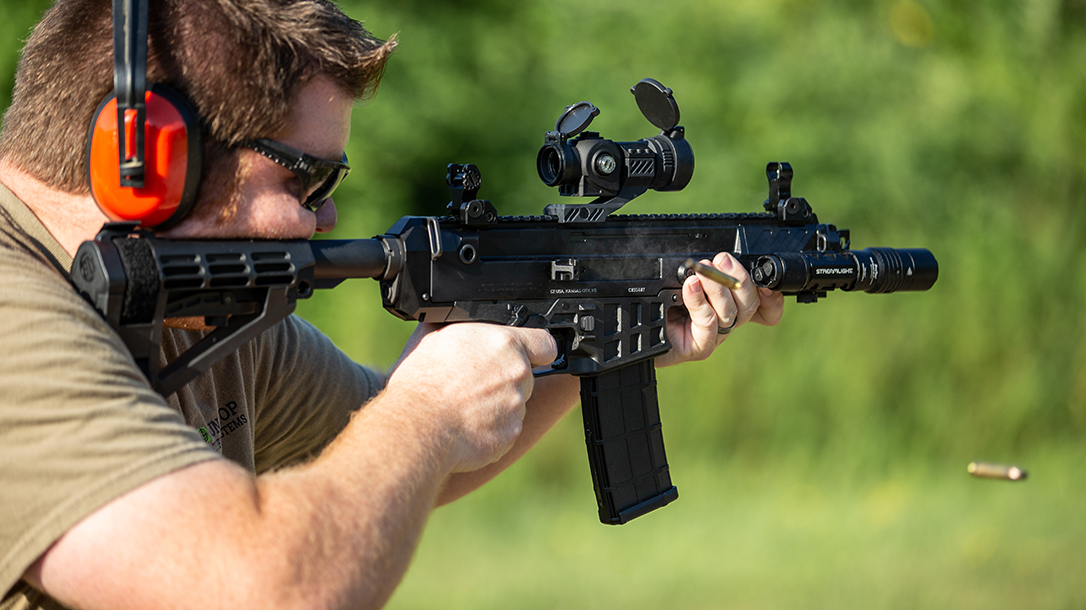 We tested the pistol’s accuracy by shooting groups at 50 yards. However, with a 1X red dot, the shooter’s eyesight plays a major role. The clarity of the Bushnell Elite Tactical CQTS 2.0 was excellent, and we were able to regularly get 1-inch groups at that distance with the aid of high-visibility targets and just using the single-dot reticle. The best group—just 0.75 inches—came with Hornady’s 75-grain Black HD SBR load.

The Bren 2 Ms was extremely fun to shoot. With folks lined up to give it a go, we went through nearly 500 rounds in just an hour-and-a-half. We ran an assortment of ammunition through the pistol from Federal, Hornady and Winchester without a single malfunction—as expected. In fact, I can’t remember a time in the last five years when I’ve had a malfunction with a CZ weapon of any kind. These guns just work.

The real highlight of shooting the Bren 2 Ms pistol was the phenomenal trigger pull. It was easily the best pull of any stock/production pistol of this type that I’ve tried. In fact, it was better than most custom triggers I’ve tried as well. There was about 0.5 inches of silky pre-travel before the trigger broke at 2.69 pounds on average. The experience was nothing short of exquisite and helped immensely with shooting tight groups.

The only weak point that I could find with the pistol was that the receiver got very hot with extended fire, even as far back as the magazine well, and there aren’t a lot of non-metal gripping points for the support hand. So, if you’re going to give the Bren 2 Ms pistol a workout, gloves are in order.

Other options are available like forward grips, but the complexities of NFA laws regarding AOW status, such as weapon length, what accessories may be counted in weapon length and whether to measure with a brace/stock collapsed or extended would require an entire article unto themselves. I would say do your own research, be careful and consult with the BATFE on those points.

While the original CZ 805 Bren S1 was an impressive tool in its own right, the changes incorporated into the Bren 2 Ms make the platform modular, more ergonomic and easier to use, providing a better overall shooting experience.

The Bren 2 Ms pistol is ready to hit the range right out of the box. However, the platform’s ability to accept popular aftermarket modifications makes a great firearm truly sensational. With accessories from top-tier companies like Bushnell, Magpul, SB Tactical and Streamlight, you can tailor the pistol to your individual needs and truly make it your own. At $1,799, the price of admission isn’t cheap. But all things considered, dollar for dollar, I think the Bren 2 Ms is the best show in town.

The B&T APC10 Pro puts 10mm in an incredibly compact submachine gun and the... 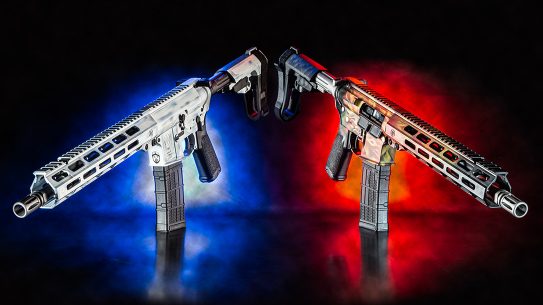