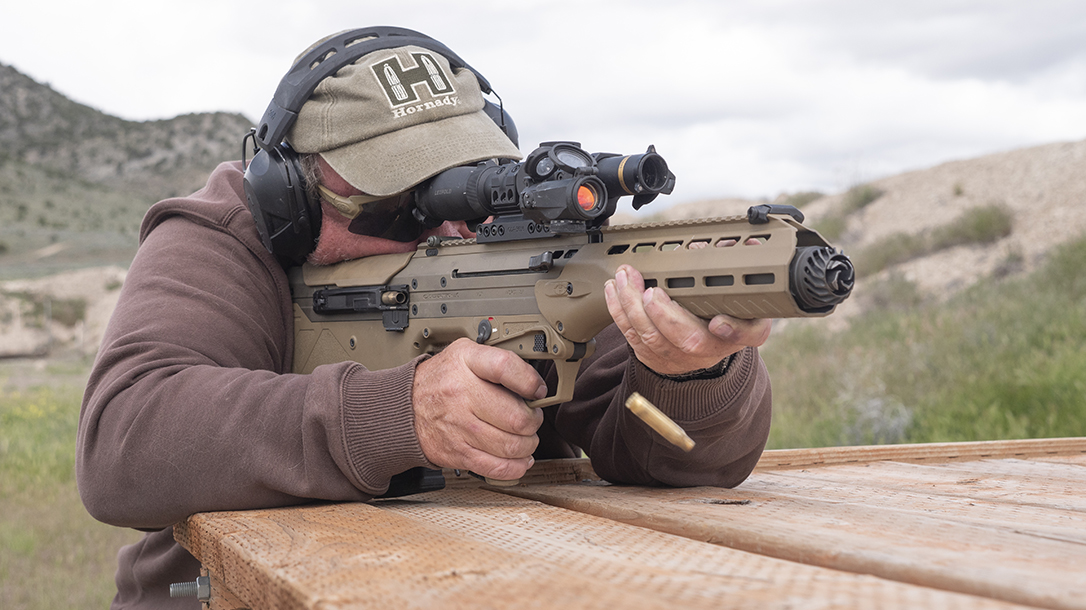 1 of 3
Photo by David Bahde
The Desert Tech MDR 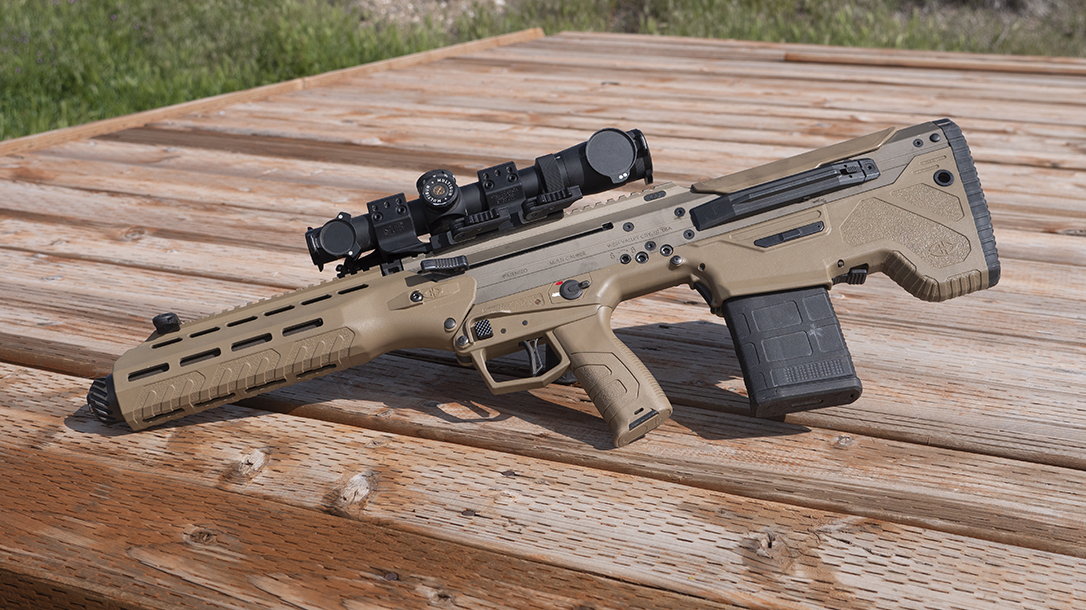 2 of 3
Photo by David Bahde
The Desert Tech MDR 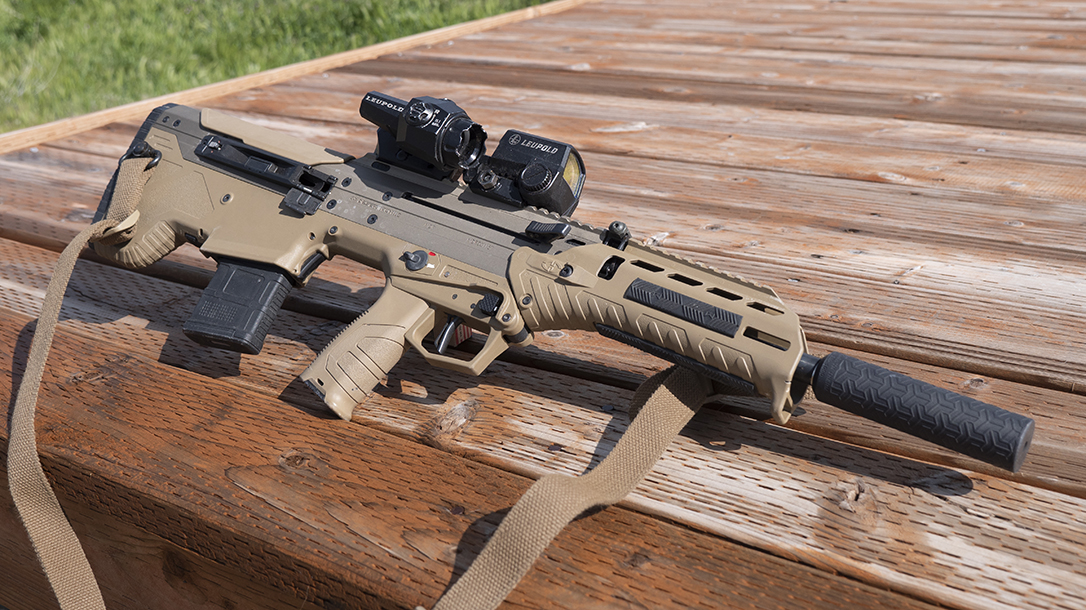 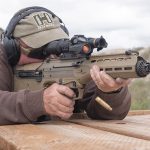 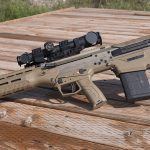 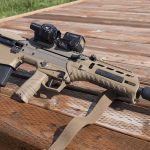 My experience with Desert Tech goes back to the company’s beginnings, or earlier if you include my time shooting .338 Lapua Magnum rifles with the owner, Nick Young. The Stealth Recon Scout (SRS) started as a discussion between us in the early 2000s. Now it’s one of the only bullpup precision rifles with any serious reach and credibility. It’s also extremely innovative and provides one of the fastest, easiest switch-barrel systems I’ve seen so far. Next came the Covert version of the rifle. After that was the Hard Target Interdiction (HTI), which is still the most consistently precise .50 BMG bullpup I’ve ever tested. The Desert Tech HTI in .375 CheyTac is also a treat. 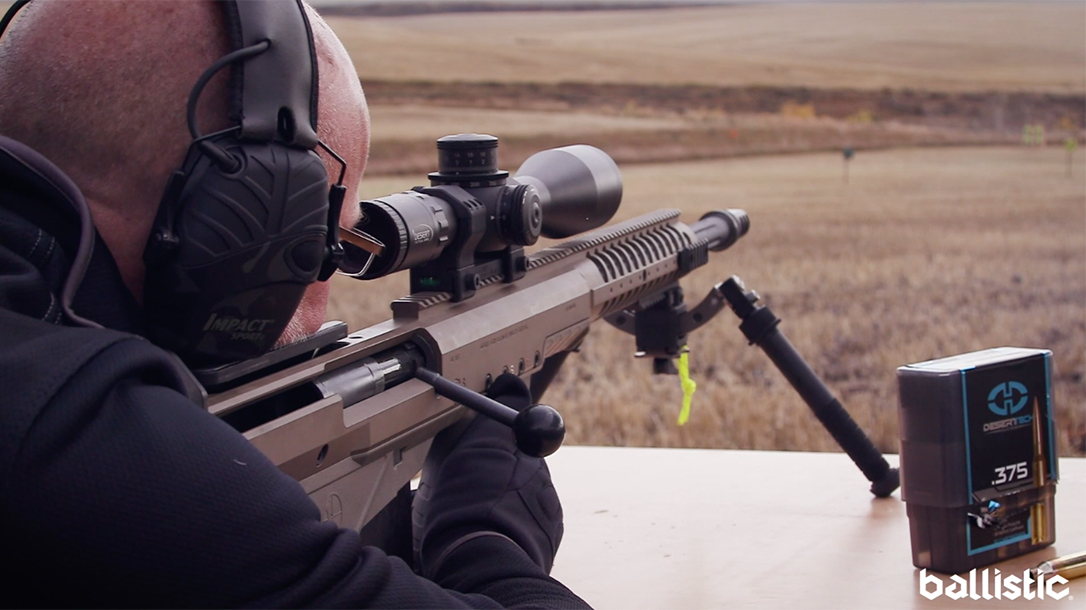 Then Desert Tech unveiled its first carbine, the Micro Dynamic Rifle (MDR), back in 2014. Solely a select-fire .308 Winchester/7.62mm NATO design at the time, it suffered some growing pains as the company tried to make it accept different barrels and calibers. That said, it was still quite innovative from the beginning thanks to its forward ejection and ambidextrous controls. It just needed a little tuning, and Nick Young set out to prove the doubters wrong.

In 2017, Desert Tech officially launched the production .308 version, as well as .223 Wylde conversion kits. The rifles worked well, and it seemed that most of the issues had subsided, though the MDR could still be picky with certain types of ammunition. That’s what I experienced when I used the rifle for a Follow Through Consulting course in Texas. The MDR ran flawlessly with Hornady’s 155- and 168-grain Black A-MAX ammunition. However, it sometimes failed to eject 175- to 178-grain rounds.

When the MDR was outfitted with a late prototype 5.56mm barrel and a 3D-printed ejection chute, it ran reliably with all kinds of ammunition as I completed a number of training courses over the next year. And when I was chosen to rank 17 different semi-auto rifles for Ballistic’s Best, the MDR finished in the top 10.

Desert Tech wasn’t done tinkering, however. It made changes to the bolt, extractor and ejector. Also, Desert Tech added a six-position gas valve for both .223 and .308 variants. Current production rifles and barrel conversions include all of these changes. However, older rifles can also be sent in for the appropriate upgrades. That’s what I did with my MDR, and after I got it back, it was time to see if the rifle was really ready for prime time.

I have both .223 and .308 conversion kits for my MDR, and my first task at the range was starting with a “What’s in the ammo can?” test. After installing a Leupold VX-6HD scope, I loaded three 20-round .308 magazines with a variety of rounds ranging from CorBon’s 125-grain TMKs to Black Hills’ 178-grain ELD-Xs. Putting the gas valve on the fourth setting for shooting in adverse conditions, the MDR digested all 60 rounds and didn’t stop or slow down until I needed to reload. Empty cases spit forward to slightly different distances, but they all ejected nicely, even the steel cases. I then set the gas valve on the third setting (normal) and ran the rifle with a .30-caliber OSS Helix suppressor. The rifle just kept chugging along.

When I tested more conventional suppressors, I switched to the second gas valve setting, and everything but the 125-grain TMKs ran well. Yes, a lot of gas kicked out of the rifle, but it was still reliable. Then I switched the gas valve back to the third setting and installed an OSS BPR, and the rifle digested several hundred rounds of Hornady 155-grain American Gunner ammo without missing a beat, even in bad weather—pouring rain, hail and some snow—at Buck Doyle’s Follow Through Consulting range in Torrey, Utah.

Next, I switched the MDR over to the .223 Wylde and replaced the Leupold VX-6HD with my favorite sighting system for this rifle: The Leupold LCO red-dot sight and D-EVO fixed 6X optic. This unique setup provides fast transitions from dot to optic without ever moving the rifle—you just shift your focus. Offset sights work on the MDR, too, but most mounts are designed for an AR, so lining the dot up with the bore axis requires some work. The LCO/D-EVO setup eliminates this.

I used Ammo Inc.’s 60-grain V-MAX rounds to zero the LCO at 50 yards and the D-EVO at 200 yards. I then tested the rifle from 50 to 610 yards using the 60-grain V-MAXs as well as Hornady’s 62-grain Frontier FMJs. Out to 381 yards, the 62-grain rounds were spot on when I held the reticle’s 400-yard mark at the bottom of the 12-inch steel target. I placed the reticle at the top of target for the remaining distances. The 60-grain V-MAXs shot even flatter and were just as accurate.

Back home, I subjected the .223 Wylde version to the same test as the .308 with varying types of ammunition. To be fair, the MDR had yet to miss a beat, but the new parts should ensure proper operation. Here my ammunition consisted of some pretty slow 68- and 69-grain match rounds, 50- and 55-grain Black Hills TSXs and some very fast Superformance 75-grainers from Hornady. There were also some 55- to 62-grain FMJ rounds of unknown origin. Again, the MDR ran everything on the fourth gas valve setting, and almost everything on the third setting with an NG2 Defense MZLMAX installed.

When I switched to a 3D-printed Thermal Defense Bantam suppressor, the rifle was reliable with nearly everything on the second gas setting. This suppressor weighs only 8 ounces and is just 3.8 inches long, with backpressure similar to that of most conventional designs. Printed from 100-percent Iconel 718, it is about as tough as it gets, especially for its weight and length, and it keeps the bullpup quite handy.

The Desert Tech MDR offers the easiest switch-barrel capabilities I’ve encountered while being completely ambidextrous. Every control is ambidextrous right out of the box, including the charging handle, bolt, safety and magazine release. Both sides feature charging handles that can lock the action open as well as ejection ports.

You determine what side the rifle ejects from by placing a solid cover on one side and the ejection chute on the opposite side. Remove the ejection chute entirely and the rifle will kick casings out like a typical rifle. There’s also a magazine release positioned forward of the triggerguard, and another is centered on the magazine well. All of this is good for lefties, but more importantly, you can operate the MDR from almost any conceivable position, no matter your strong side.

Swapping barrels is simple and easy, requiring nothing more than a couple of Torx wrenches. I’ve accomplished this in the field several times; considering the rest of the MDR’s features, no competitor out there really comes close. Switching from the .308 to the .223 resulted in a 3-inch change in the point of impact (POI) using the Leupold VX-6HD. Removing and reinstalling the same barrel resulted in little to no change. You can carry everything you’d need to switch calibers in the field in one little pack.

Other bullpups are out there, but none has proven as accurate as the MDR. I regularly stack 60- to 69-grain rounds at 100 yards with groups in the 0.6-inch range. This is one of the few carbines that shoots Black Hills 69-grain TMKs into groups tighter than an inch at 100 yards. At 300 yards, my groups are in the 2- to 2.5-inch range. The flat two-stage trigger helps. Designed for hard use, it’s no precision trigger, but it is better out of the box than most standard “mil-spec” AR triggers and light-years ahead of its bullpup competition.

Configured in .308 using a flash suppressor, the MDR weighs just over 8 pounds, which is about the same as most AR-10 rifles. That’s obviously a little heavier than most .223/5.56mm rifles, but you are getting a 16-inch barrel in a rifle that is about the same length as a 10-inch-barreled AR-15. The MDR’s weight is centered, with less over the barrel, so it carries lighter, but it’s all a tradeoff.

The .308 recoil is stout with a flash suppressor. Adding a brake helps, but that muzzle blast is closer to the shooter than with most rifles, so it isn’t particularly comfortable to shoot. Adding the OSS BPR does not change the length and eliminates blast with some recoil mitigation. The OSS HX-QD works really well, too, but then you add to the overall length. The perfect configuration for me is with the MDR set up in .223 Wylde with the MZLMAX. The gun is short, handy and incredibly accurate while being light on recoil.

Bullpups offer some real advantages. You get a compact rifle without the tax stamp, excess blast or gas, or the loss of ballistic efficiency that comes with short-barreled rifles. Being able to switch calibers is a bonus; and no other system lets you move from the .308 to the .223, and back again, on the same base platform. The MDR’s accuracy is excellent. This latest production version has proven to be just as reliable—or more so—than anything else out there. The changes made, mostly to the bolt and associated parts, seem to have created a truly dependable carbine capable of doing almost anything you would ever need it to do. You can order it in either .308 or .223, and conversion kits consist of the barrel, bolt, mag conversion (where needed) and magazine catch. For more information, visit deserttech.com.