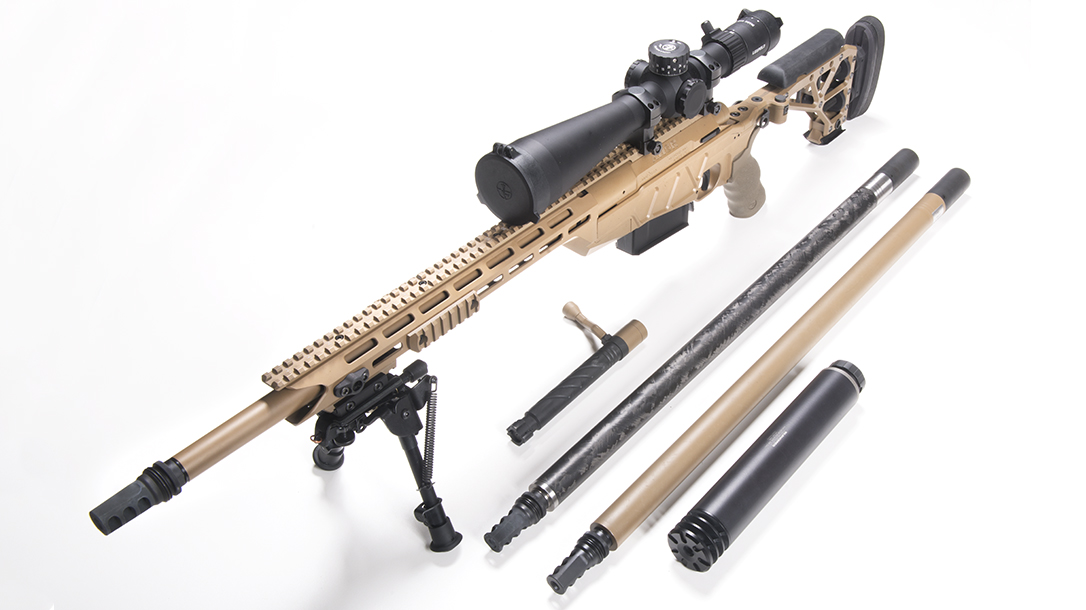 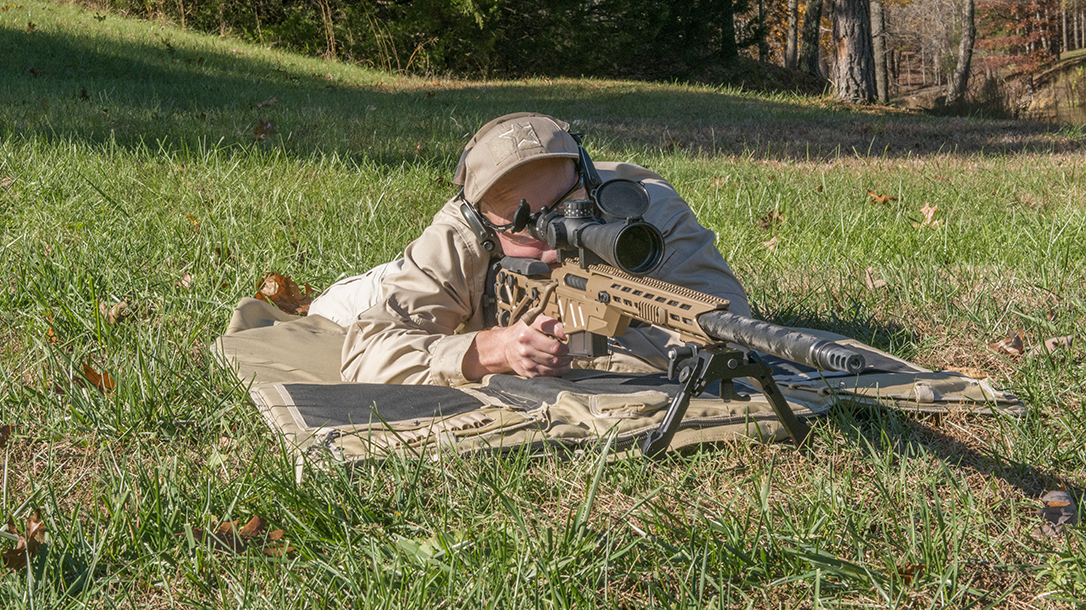 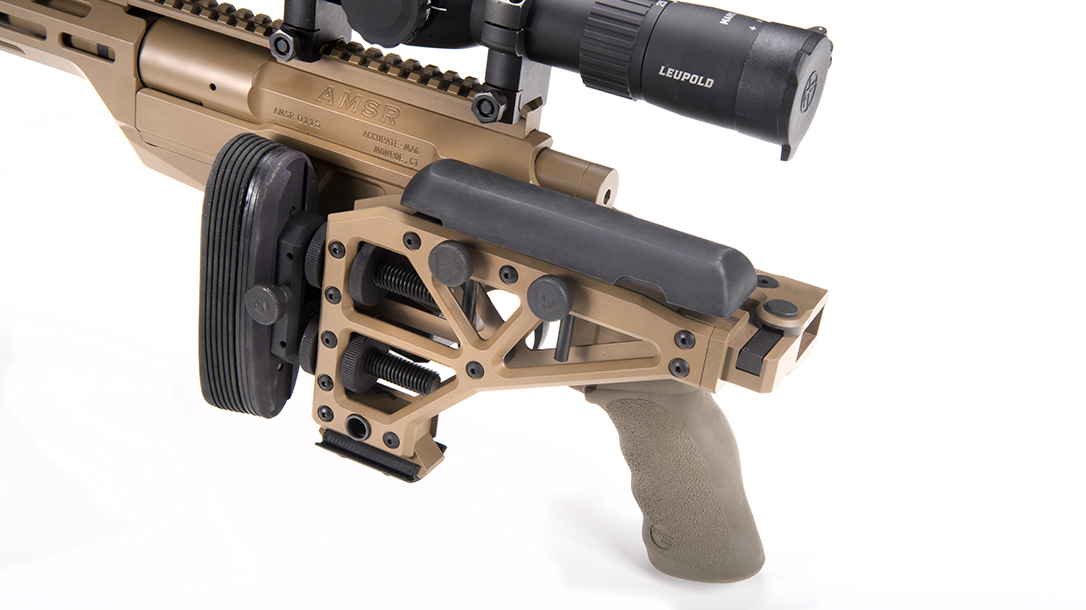 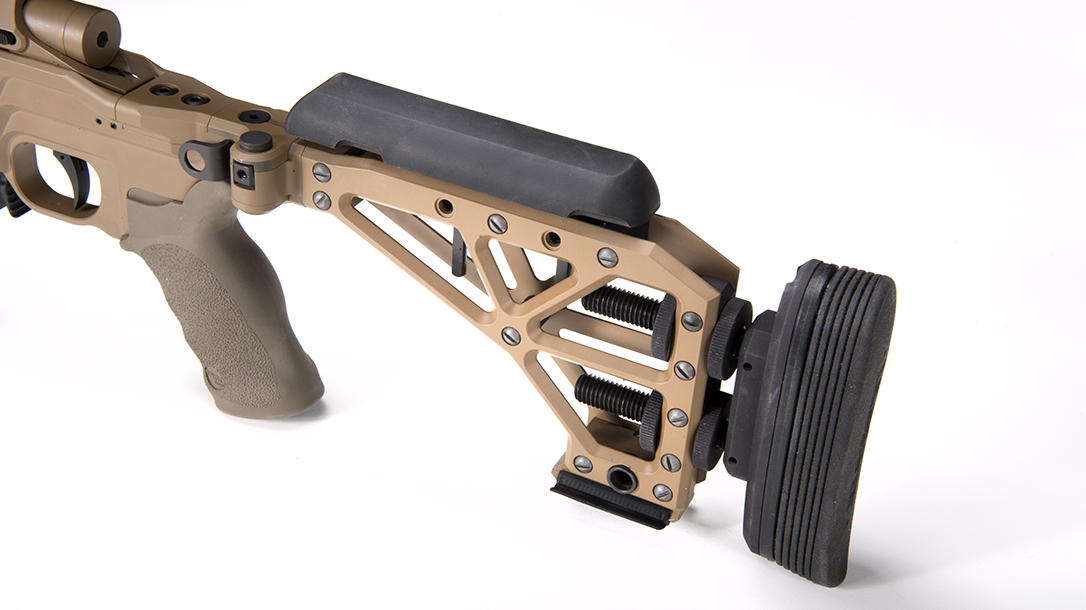 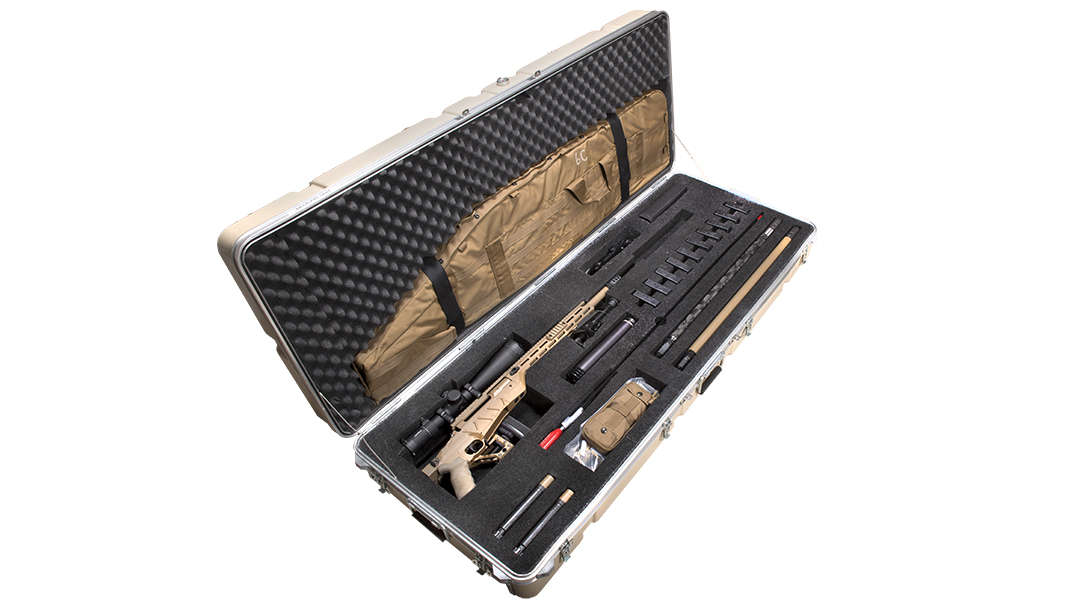 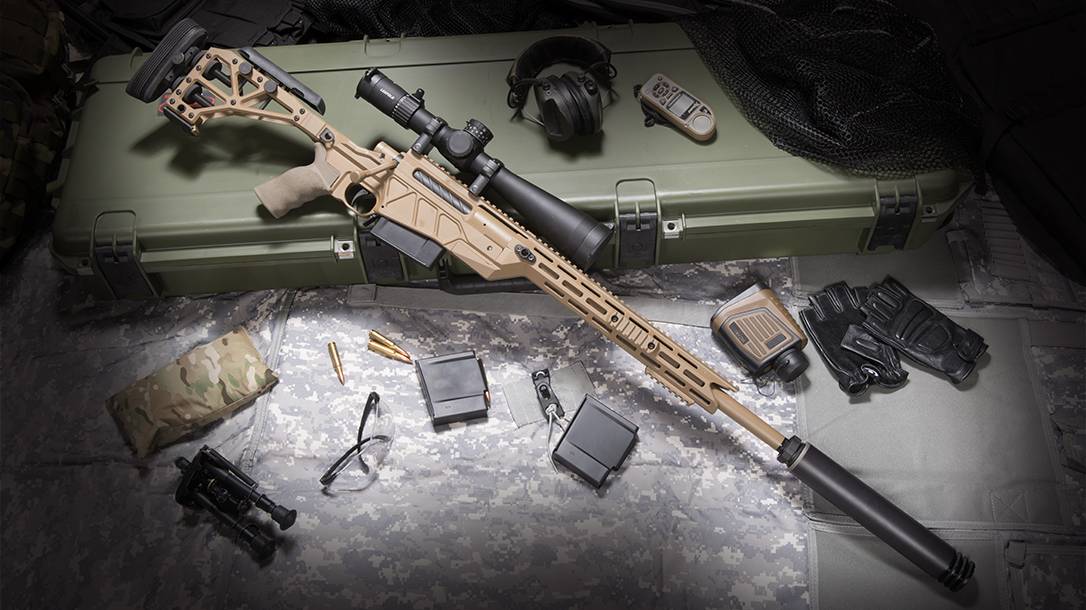 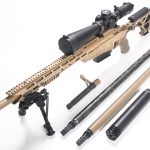 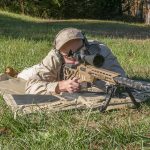 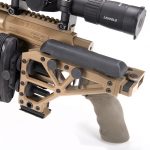 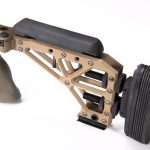 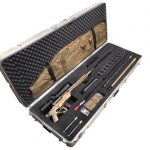 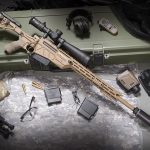 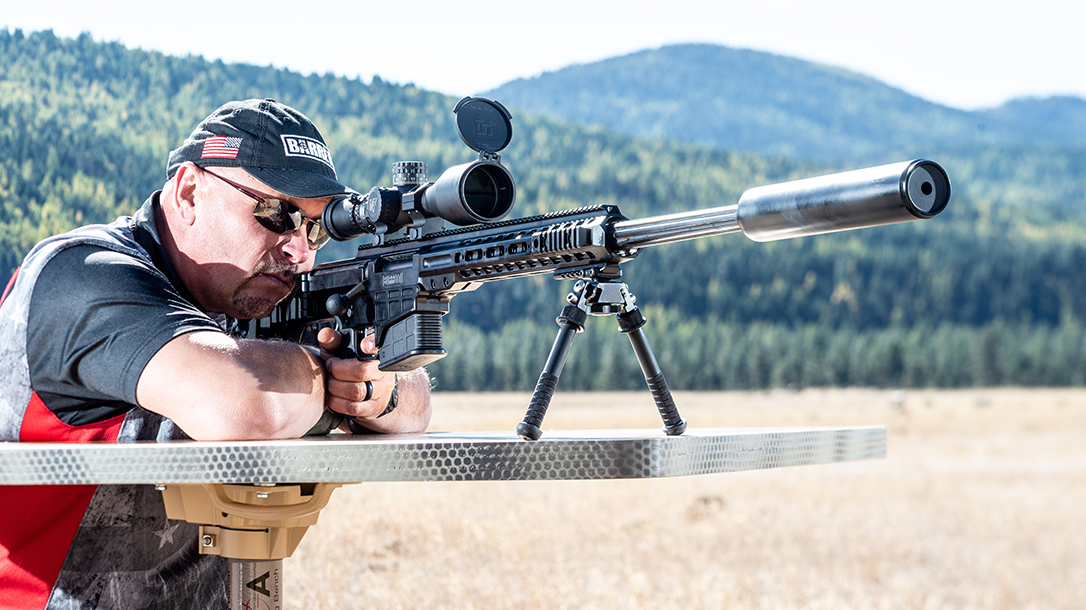 The ASR program had a number of requirements. USSOCOM dictated that the precision rifle needed to be a complete system that came with a sound suppressor, as well as three caliber conversion kits and the tools necessary for the task. USSOCOM originally listed the calibers as the .308 Winchester/7.62mm NATO, .300 Norma Magnum and .338 Norma Magnum. There were also accuracy requirements for each caliber.

Black Hills was contracted by the military to supply ammo for the solicitation. However, other details on the program are hard to find, including the names of the companies that submitted rifles. Except for Accurate-Mag, which entered the contest with its Advanced Multi-Caliber Sniper Rifle, or AMSR. And though it didn’t win in the end, it’s still worthy of a closer look.

Founded in 2005, Accurate-Mag was started to manufacture .308 magazines for the U.S. Marine Corps due to a shortage of Accuracy International magazines. Since then, the company’s product line has steadily grown to include more than 60 different calibers and magazine types. Bottom metals were quickly added and have been used as the OEM standard by Savage, Remington and Ruger for the past decade.

Accurate-Mag developed its first rifle chassis system in 2012 for many regional police departments. It also took form in many OEM offerings, including the Colt M2012, Kimber SOC and Howa HCR. That same year, Accurate-Mag also formed a partnership with Rangemaster Precision Arms (RPA) of the UK, which manufactures some of the finest military rifles in the world. The Accurate-Mag AM40-A6 rifle was then retrofitted with RPA’s barreled action and trigger, making it an instant success in the police marksman world. This partnership was also the foundation of the AMSR rifle.

In 2014, with the release of the USSOCOM Precision Sniper Rifle (PSR) solicitation, Accurate-Mag developed the Multi-Caliber Magazine System and Fire Control for the Remington PSR entry. The company worked very closely with Remington’s engineers to develop the rifle that won the competition. It also helped Remington with the XM2010 rifle in .300 Winchester Magnum for the U.S. Army.

When the ASR program was announced, Accurate-Mag started developing a new rifle design to submit. The AMSR is the result of two years of work. Two of the rifle’s primary features are its Quadlock bolt face and ball-bearing trigger, which come from RPA and have been in service for 30 years around the world.

Accurate-Mag’s submitted kit includes the rifle with the three required barrels, .308 and .338 Norma Magnum bolts, a SilencerCo Harvester suppressor, a Leupold 5-25x56mm Mark 5HD scope, .308 and .338 magazines, standard and large bipods, a tool kit, cleaning tools and a soft case/drag bag. Everything comes in a large Thermodyne hard case with custom-cut foam to cradle the rifle and accessories.

Accurate-Mag machines the AMSR’s action and bolt in-house from 4140 hardened steel. The 718 stainless steel barrels, made by Proof Research, help reduce the AMSR’s weight. Carbon-fiber-wrapped barrels with a special, high-tension, bi-directional weave designed specifically for Accurate-Mag are also available. The company boasts that there is almost no point-of-impact shift between suppressed and unsuppressed groups.

Accurate-Mag designed the chassis especially for the AMSR’s action. Made from 7075-T6 aluminum, it features an ambidextrous magazine release, M-LOK attachment slots, an Ergo pistol grip and the Stratum folding stock, which is adjustable for comb height, length of pull and recoil pad height. Accurate-Mag specifically designed the stock to meet the requirements of the ASR solicitation. It will soon become available for Accurate-Mag’s other chassis systems.

The AMSR sports RPA’s Blue Trigger, which features three ball bearings for a smooth pull and five points of adjustment, including bent weight, travel stop, pull weight, creep and stop adjustment. The weight is user-adjustable between 1.5 and 6 pounds. Another RPA feature is the action’s unique camming bolt release, which allows the shooter to softly eject the case or throw it out to 10 feet depending on the amount of force applied to the bolt handle.

Accurate-Mag tested suppressors from nine companies and picked the SilencerCo Harvester because it provided the best performance-to-cost ratio. I didn’t get to test the submitted silencer, but Accurate-Mag apparently modified it to help regulate the gas so it’d be the same for the different calibers.

After installing the bolt, I dry-fired the AMSR’s trigger. The very smooth movement and crisp pull was impressive. In fact, it was so smooth that I had a difficult time feeling both stages. I measured the pull weight to be 2 pounds. I was equally impressed with the bolt’s movement within the action.

My accuracy tests were performed with standard, commercially available ammunition from a few different manufacturers because Black Hills was unable to send me its contract ammunition due to government restrictions.

I really got a feel for the trigger on the range. As impressed as I was dry firing, I was even more impressed when it came time to shoot live ammo. With its light touch and very smooth travel, I would rank the trigger among the top—if not the top—bolt gun triggers I have ever used.

The accuracy results were equally impressive, as I shot 0.5-inch groups at 100 yards with all three calibers. The minor differences in group sizes among different loads had more to do with my shooting than the rifle’s accuracy. I found the AMSR to be very consistent with different loads from different manufacturers.

The AMSR’s 0.5-MOA accuracy is extremely impressive coming from a commercial rifle with factory ammunition. Usually that level of accuracy can only be obtained by a custom gunsmith. It’s also worth noting that Accurate-Mag offers the AMSR as a single- or two-barrel kit. The company also offers a caliber-change kit.

The Accurate-Mag AMSR impressed me with its sturdiness, barrel-change capabilities and accuracy. This is especially impressive for a multi-caliber rifle. I would definitely put it on top of my buy list. For more information, visit accurate-mag.com. 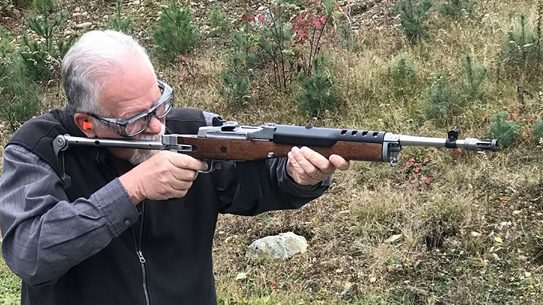 Popularized on 'The A-Team,' Samson Manufacturing has teamed up with Ruger for its perfect... 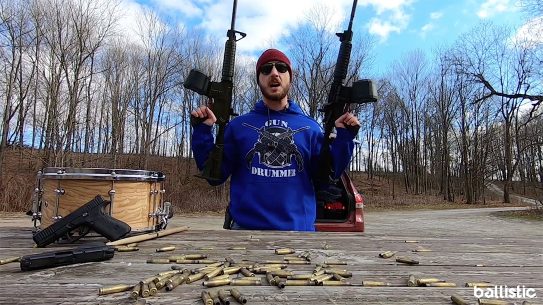 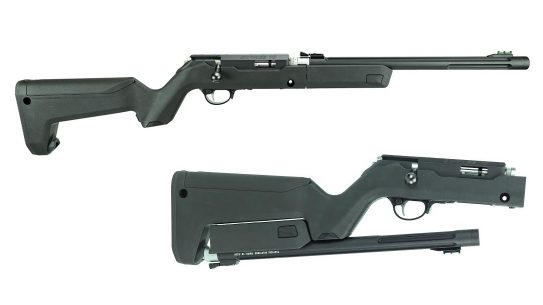