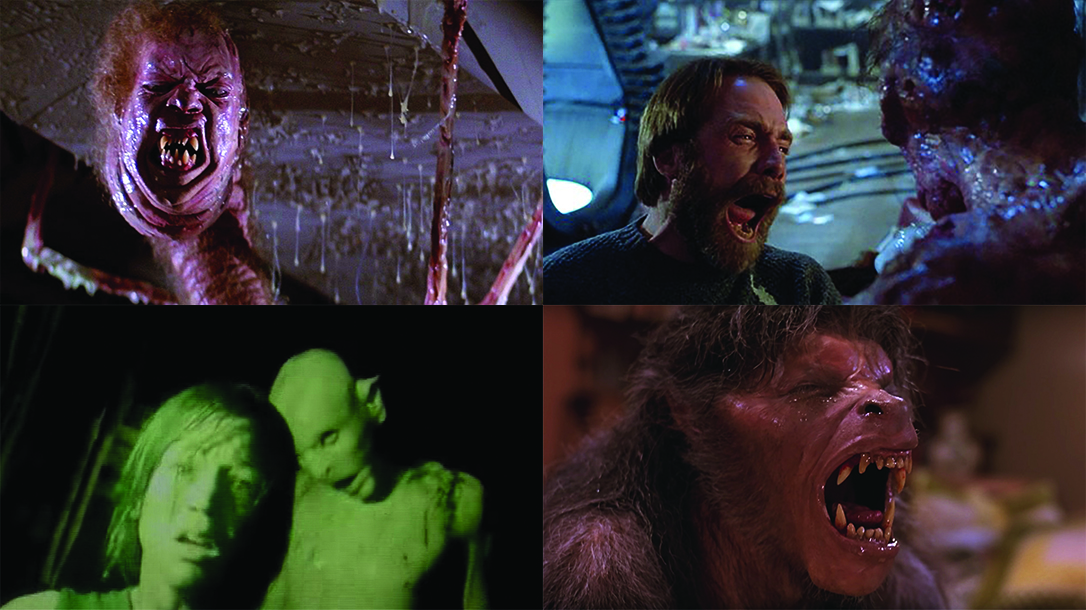 Similar to the start of fall when every “basic” girl rekindles her love for Pumpkin Spice Lattes, the lead up to Halloween brings out horror movie lovers in droves. We at Ballistic are more “year rounders” when it comes to horror flicks, but we’ll indulge the masses on this particular occasion. 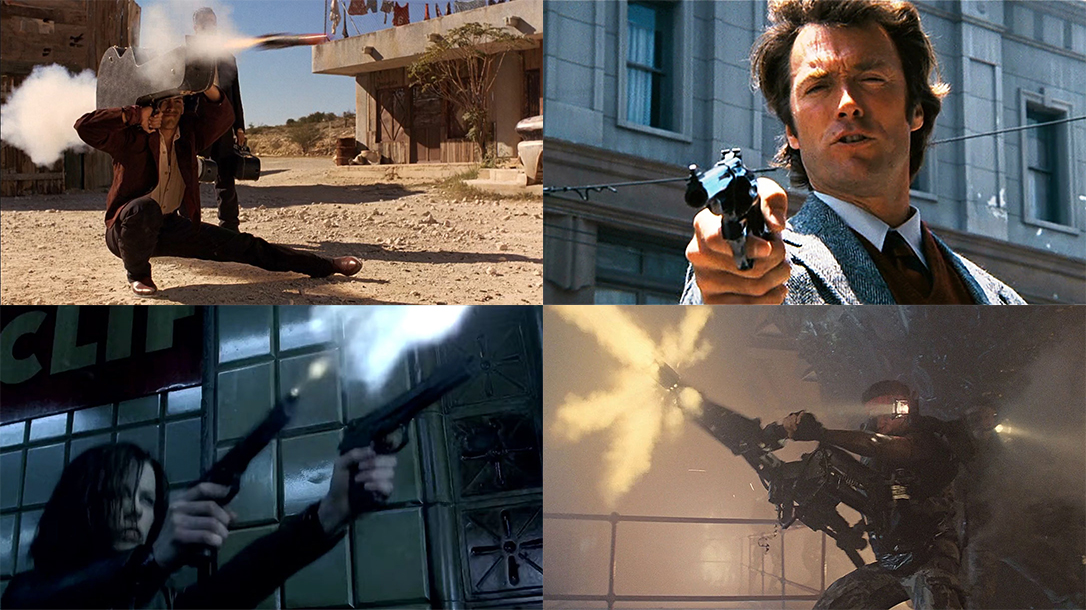 Our love for cinema is well-documented, however, it usually revolves around firearms. We’ve listed the all-time best movie guns, as well as our favorite movie shootouts. But this isn’t a gun-based list; this is straight-up cinema with no ties to the “pew pew” aspects. This is our list of scary movie moments that literally made us yell “what the f*ck?” the first time we saw them. Also, we can’t run a piece on the best horror movie guns because those bastards over at Tactical-Life.com—actually, our good friends—already did it.

How did we determine our list of scary movie moments? For starters, age of the film is a big factor. Most modern-day “horror” movies revolve around cheap jump scares and over-the-top gore to mask garbage plots and recycled mediums. We understand that it’s tougher to be original as more horror floods the market, but older films had a knack for being creative and genuinely scary. Therefore, most of this list features older films before CGI came along and ruined the good ol’ fashioned animatronics and imagination.

Age of the film is also a factor because many of these films/scenes were simply “ahead of their time”; that’s a phrase you’ll hear us use quite a bit here. Along with the shock factor that many of these scenes have, that’s the basis for our list.

We’ll proceed in chronological order. However, before you continue, this list is ripe with spoilers, so if you haven’t seen any of the films below … then it’s your own fault. Shame on you. Also, you might not agree with our list of scary movie moments, which is fine. Feel free to list ones you feel should’ve made our list in the comment section below. Without further ado, let the screams begin.

Alfred Hitchcock had already earned his nickname—”The Master of Suspense”—before “Psycho” made its way to the big screen. However, the moniker took on a different meaning after this one. From the music to the surprise, this scene left audiences at the time mentally scarred and appalled. It may very well be the most iconic horror scene ever.

“They’re coming to get you, Barbara.” Zombie godfather George A. Romero—may he rest in peace—put the undead on the map with “The Night of the Living Dead,” his first foray into the zombie genre. Since then, there have been hundreds of films—some incredibly well done—that have built upon the zombie craze. However, none do it like this one. The opening scare left audiences saying “what the f*ck?”, because they literally had no idea what was happening and were too afraid to imagine the possibilities.

It’s the flick that’s constantly in the conversation for “Best Horror Movie of All Time,” and rightfully so. It was [clears throat] way ahead of its time, scaring the absolute sh*t out of audiences who weren’t ready for it back in the 1970s. The crucifix-stabbing, head-spinning scene usually gets all the glory, but the “spider walk” is downright horrifying. It actually didn’t make the original cut of the film, which was probably for the best. This was also before CGI took over, so respect the process of what it took to get this done. For us, this off the charts on the WTF scale.

The low budget certainly helped the creepy factor of this 1974 classic. The jump from the scene also might be the strongest because of the film’s slow, disturbing build. This one goes zero to 60 real quick. Leatherface’s introduction comes out of nowhere and hits like a … wait for it … hammer. Yeah, couldn’t help ourselves.

Firstly, we could probably quote this one from start to finish, beginning with poor Chrissie’s death (see above). Beyond that, Steven Spielberg’s classic literally scared people out of the water in 1975 and still has a similar effect on viewers today. The opening scene set the stage for what is one of the biggest blockbusters of all time. Audience members sat in their seats asking, “Did that seriously just happen?”

As the previous films indicate, the 70s did a lot of things right for the horror genre. The “chest burst” is another iconic scare that had people literally jumping out of their seats in theaters. The whole film is a masterpiece, as it paved the way for generations of scares to come. Need we say, it was ahead of its time? Well, we did—and it was.

An American Werewolf in London (1981)

Horror legend Rick Baker handled the makeup in “An American Werewolf in London,” so that should say more than enough. He collected his first Oscar in the process; it would be one of seven in his career. There was one scene that truly defined this film. Affectionately referred to by horror aficionados as “The Transformation,” nothing like this scene had been done before on the big screen. Cough, ahead of its time, cough, cough. It still leaves us speechless today.

No, not that hunk of garbage remake from 2011. We’re talking about the 1982 version, which was actually a remake of 1951’s “The Thing From Another World.” Kurt Russell leads the charge in this absolutely perfect horror film set in the Arctic. Building on the special effects seen in “An American Werewolf in London,” “The Thing” takes it to the next, jaw-dropping level. The scene above is a perfect example of said special effects, and such an amazing scare.

Damn, 1982 was a good year. Like several of the movies on this list, “Poltergeist” has a number of scenes to choose from. The nightmare-inducing toy clown scene certainly stands out, but Marty and his late-night eating habits take the cake. And to think this movie has a PG rating. Oh, we miss the times when people weren’t so easily disturbed by every little nuance. Having said that, this scene is incredibly messed up.

“Be afraid. Be very afraid.” Yes, that quote is from this movie. Starring modern-day pop culture wonder Jeff Goldblum, the 1986 film “The Fly” was another incredibly compelling remake. The film’s brutality makes the 1958 original starring horror icon Vincent Price look like a Disney movie. The arm wrestling scene is quality. However, the film culminates with this acid-vomiting, flesh-melting beatdown that causes a similar reaction to those who watch it and most certainly warranted a “what the f*ck?!?” the first time we saw it.

The only post-Millennium film to make this list, “The Descent” jumped onto the horror scene out of nowhere in 2005 and quickly got people talking. It centers on an all-female cast on a cave climbing expedition gone horribly wrong. The setting is important because even without the insane 180-degree turn the film takes about halfway through, an uncharted cave is a creepy place to begin with. Adding elements of uncertainty and claustrophobia into a horror film makes for a potent recipe. When you add in flesh-eating, underground-dwelling cave people—as shown in the scene here—that recipe causes you to sh*t your pants and literally scream in the middle of a crowded theater … not speaking from experience. 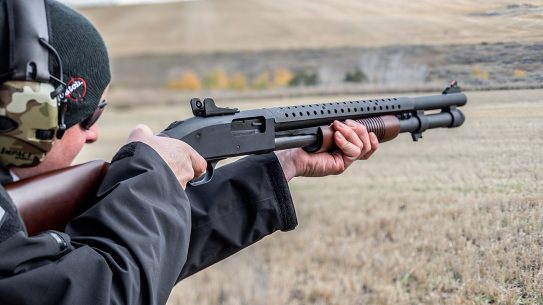 WATCH: Old Meets New With the Mossberg 590A1 Retro Shotgun

With its walnut stock and corncob forend, the 12-gauge Mossberg 590A1 Retro Shotgun represents...