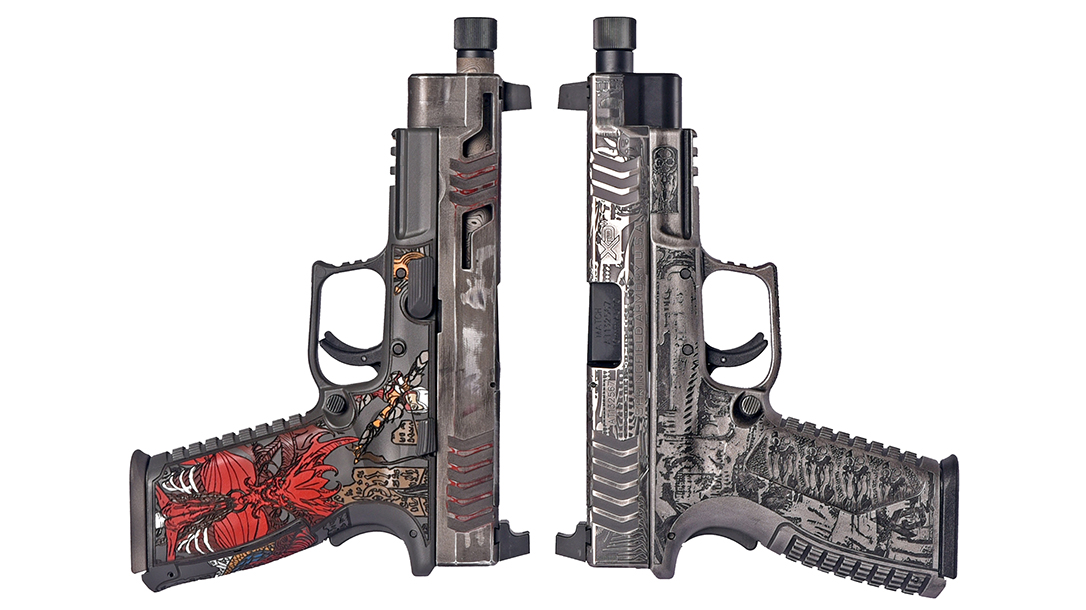 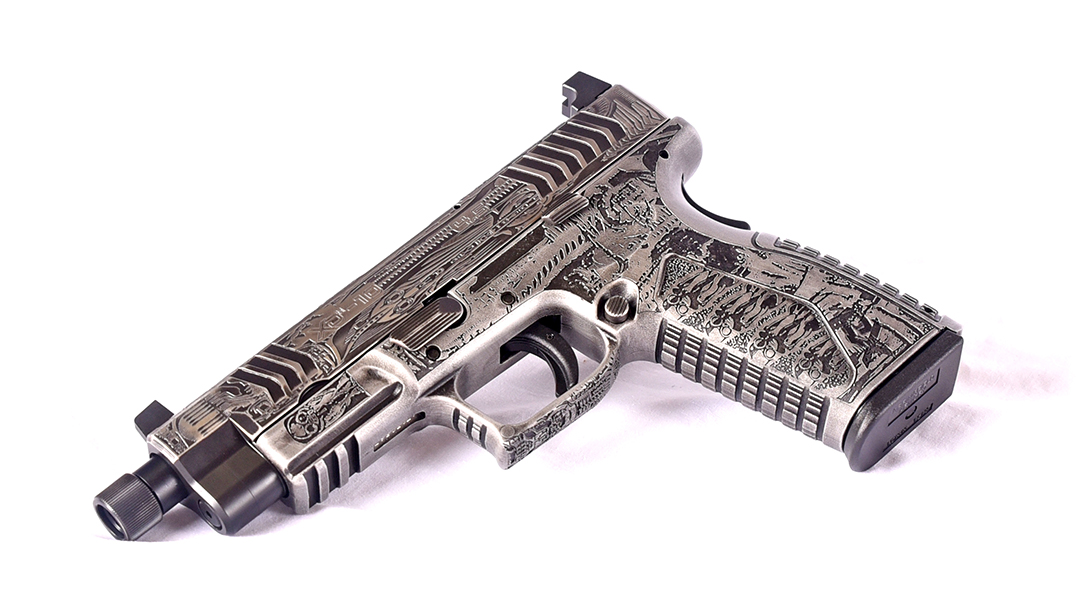 2 of 6
Photo by Andy Grossman
The Blowndeadline Build 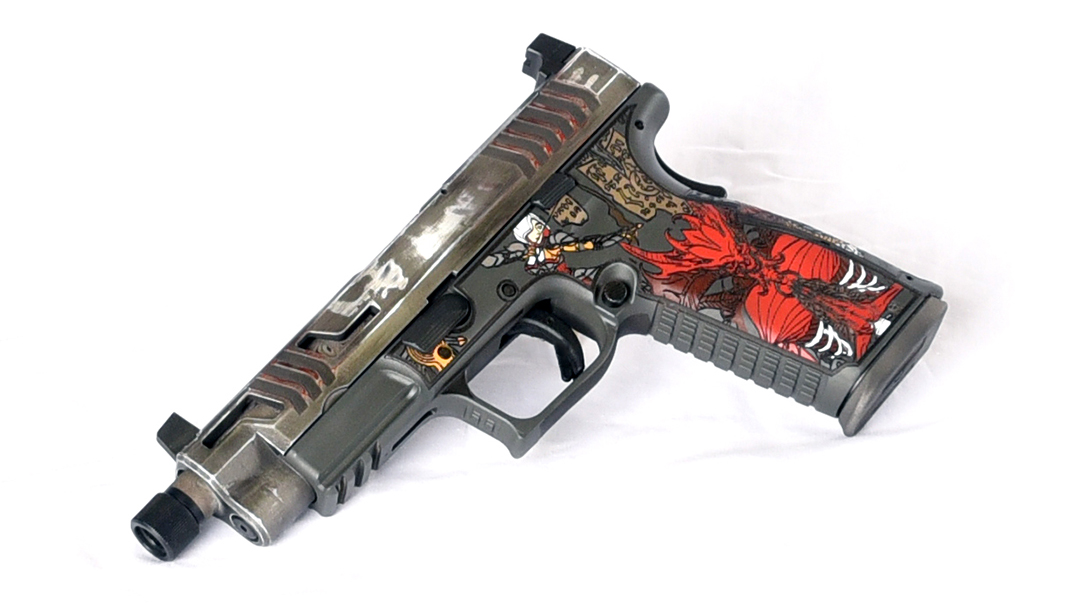 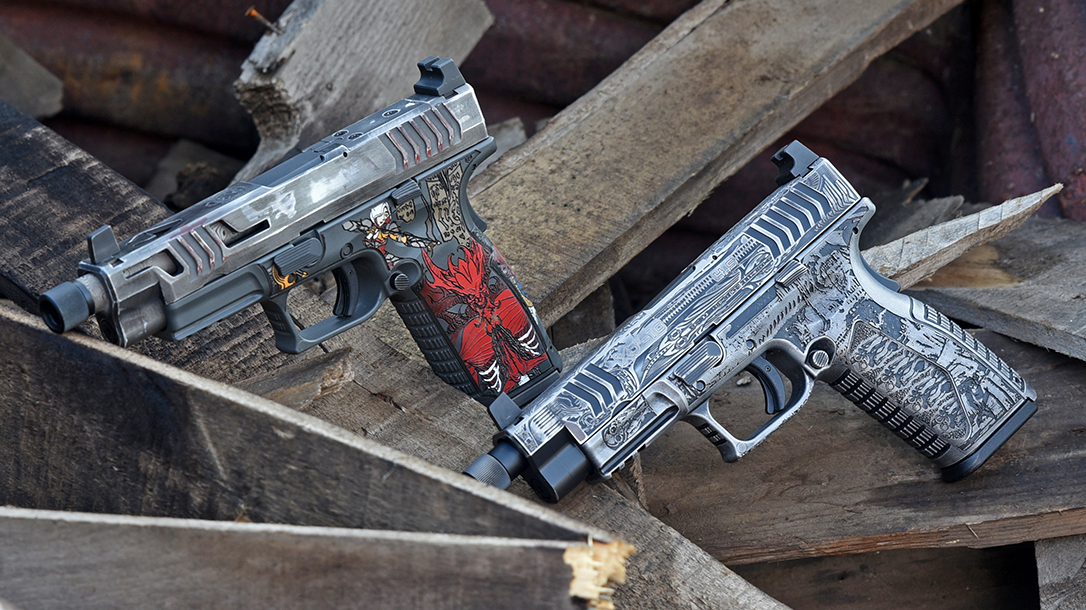 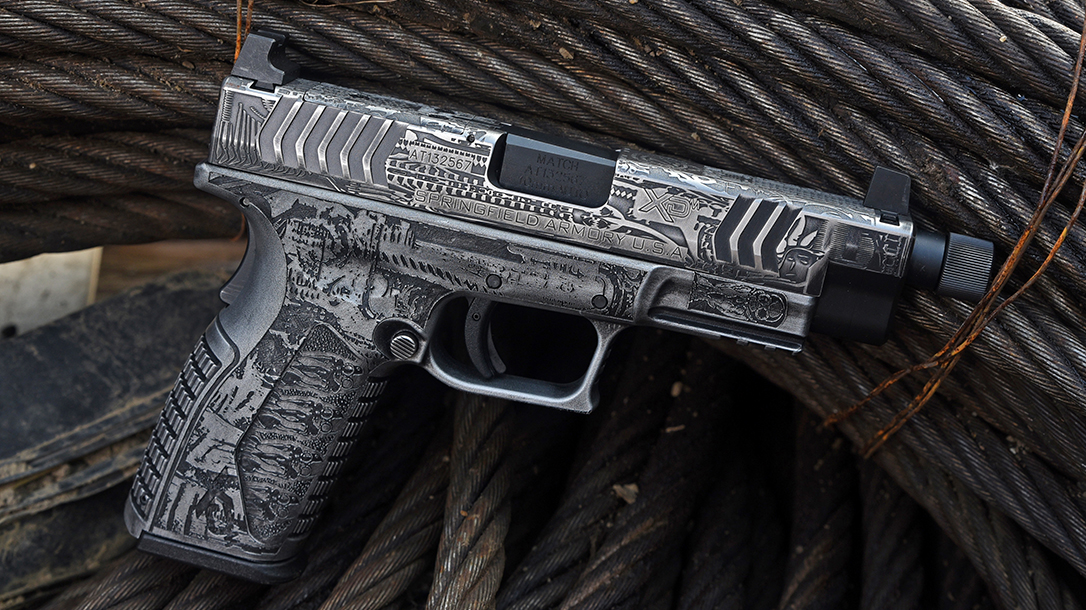 5 of 6
Photo by Andy Grossman
The Blowndeadline Build 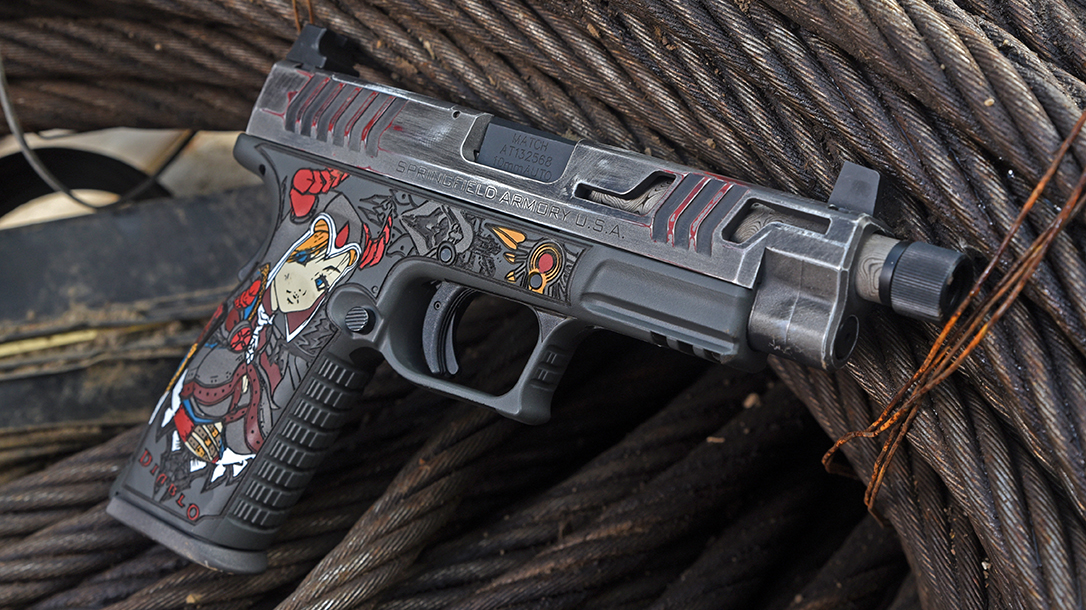 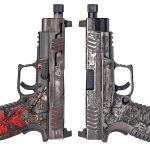 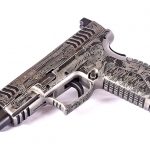 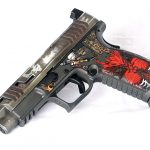 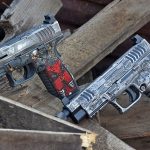 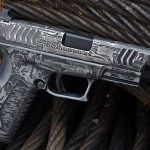 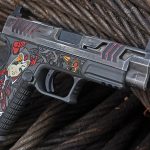 Detroit is known for its automotive and manufacturing roots, and for being a city that has its own attitude and a vibe like no other. This shows in all of the Motor City area businesses, especially in the plethora of custom firearms shops. But two shops stand out from the crowd. You’ve probably heard of them if you’ve read Ballistic in the past: Blowndeadline—run by Cerakote wizard Michael Sigouin—and Odin’s Workshop, with Cody Dennis as its Cerakote master. These two Michiganders are only about 30 miles from each other, but both are known for their insanely unique styles. 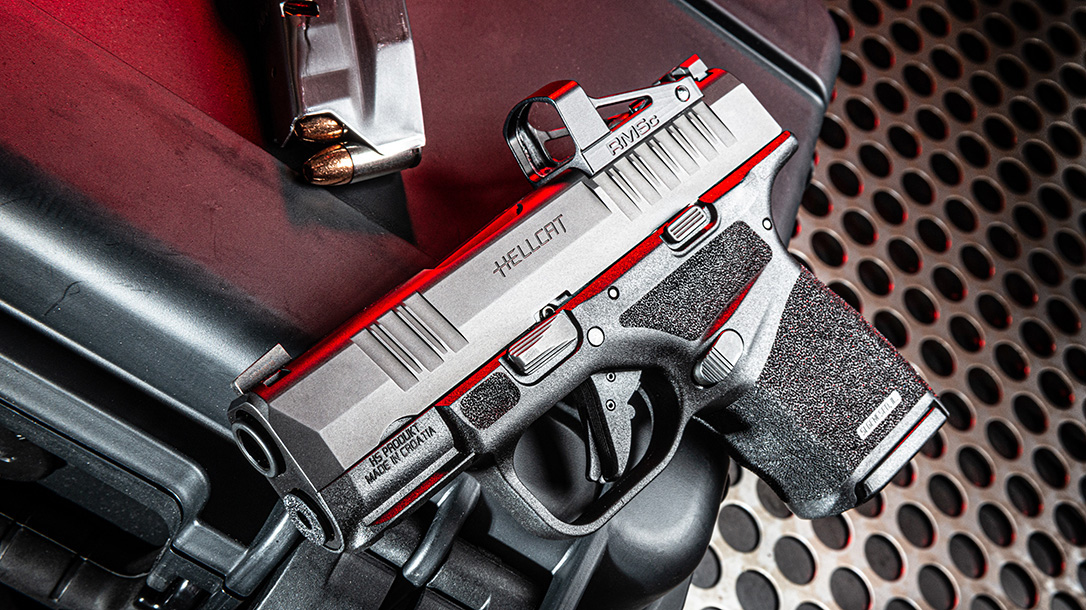 The Springfield XDM 10mm OSP Base

To level the playing field for this “Custom Challenge,” we had each shop work with the same base pistol, the Springfield XD-M OSP in 10mm, which delivers the muscle Detroit is known for. Optics ready out of the box, the XD-M OSP ships with three adapters plates, making it compatible with Vortex Venom, Burris FastFire, Leupold DeltaPoint, JPoint and Trijicon RMR reflex sights. Furthermore, it boasts a threaded barrel and suppressor-height iron sights. In my opinion, it’s the perfect platform to let these customizers go crazy. We gave the gurus at Blowndeadline and Odin’s Workshop no rules, no themes—just a bare-knuckle, head-to-head battle.

Michael Sigouin at Blowndeadline decided to pay tribute to the twisted mind of H.R. Giger with his Springfield XDM 10mm. If you aren’t familiar with H.R. Giger, he is the creative mastermind behind the monsters in all the Alien movies, as well as creatures from many other silver screen favorites. He also created one of the most famous firearms-related artworks ever.

“Birth Machine” is Giger’s manifestation of his strong belief that the greatest threat to our civilization is the approaching overpopulation of the planet. What started as artwork on a canvas in 1967 was later adapted into an aluminum sculpture in 1999, and now into a real gun thanks to Blowndeadline’s very creative laser and Cerakote work.

Michael managed to use only graphite black and titanium Cerakote on his version of “Birth Machine,” along with taking the slide down completely to raw metal and putting the laser to work engraving Giger-style designs into the steel. The XD-M slide offers a lot of real estate. Michael made sure he covered as much of it as possible, keeping the factory serrations, which actually match the design perfectly. He also gave the slide a graphite black coating before giving it a “battle-worn” finish that allowed the raw metal to shine through—a very subtle detail that is probably one of my favorite aspects of this build. He then hit the slide with a clear coat to seal it up and give it a good shine. The deep engraving just works perfectly with the factory features of the slide.

The frame received an insane amount of laser therapy as well, and then was Cerakoted to bring out the details. Michael said, “One of the hardest things to do is make plastic look like metal with Cerakote.”

Blowndeadline’s method of applying the titanium Cerakote achieved the plastic-looking-like-metal effect perfectly. The original “Birth Machine” statue was made of aluminum, which is why Michael chose the simple color scheme. Using the original XD-M logo on the grip panel as part of the design is a very cool detail as well. The entire package would be something H.R. Giger himself would be proud to carry.

Odin’s Workshop’s extremely detailed, one-of-a-kind laser and Cerakote work first caught my eye at the NRA show in Indianapolis. I still can’t figure out how the company does it, but Odin’s Workshop has been blowing minds with its insanely detailed laser designs, which pop with techniques that can only be considered some sort of voodoo witchcraft.

Cody Dennis is the mastermind behind the company’s designs. For this build, he studied his competition a bit. He said, “I really looked at Blowndeadline’s work and tried to curb my design toward Michael’s characteristics of custom gun themes. He seems to do a lot of video game styles. So I decided to run with a video game I always liked: Diablo.”

Diablo is set in the fictional kingdom of Khanduras, in the mortal realm. It involves the player taking control of a lone hero battling to rid the world of Diablo, the Lord of Terror. Beneath the fictional town of Tristram, the player journeys through 16 dungeon levels, ultimately entering Hell itself in order to face Diablo. Sounds pretty awesome, right? The Diablo XD-M that Odin’s Workshop presented to me tells this story perfectly. It’s like looking at a piece of art in a gallery—the details just keep popping out at you.

Odin’s Workshop works very closely with Continuous Precision, a custom slide-milling company in Milford, Mich. Instead of lasering the slide, Cody decided to send it over to Continuous to have some custom ports cut into it. The slide work, with its custom devil horns, really puts it over the top and brings that Detroit vibe into the gun a bit. Then Cody grabbed his spray gun and went to work. He laid down four different colors, including crimson, stainless, Armor Black and a little Stormtrooper White. After working his magic, he finished the slide off with M160 clear coat. The colors and battle-worn finish definitely transformed the slide into the perfect accent piece for the insane framework.

When I asked Cody how he creates such intricate designs, he said, “Three cups of coffee, lack of sleep, constipation, the bald eagle on my shoulder—not a real bald eagle, though, just a parrot I shaved—a Buzz Lightyear keychain and a partridge in a bonsai tree.”

He then told me about the color palette he used after the laser was finished. I just kind of looked at him with a blank stare as he rattled off nearly every color Cerakote makes. Well, maybe not every color, but 10 colors on the frame alone. He started with a dark gray base coat. After that, he applied nine more colors: Crimson, red, desert gold, plum brown, Flat Dark Earth, sky blue, stainless, sand and Stormtrooper White. Each side of the frame really tells its own story. The details just keep showing up as you stare at the frame, going from a demon on one side to a demon hunter on the other.

These incredible Michigan Cerakote artists were given no boundaries and were allowed to roam outside their cages with these 10mm pistols, delivering the two baddest XD-Ms I have ever seen. See the form below for a chance to win these bold beauties. To learn more about the base weapon, check out Springfield-Armory.com.

This article is from the October/November 2019 issue of Ballistic Magazine. Grab physical and digital copies at OutdoorGroupStore.com. 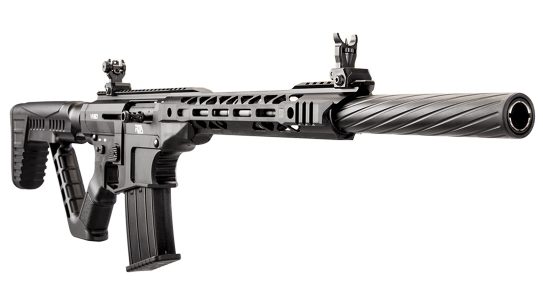 With controls and styling similar to that of a modern AR-15, the all-new Armscor... 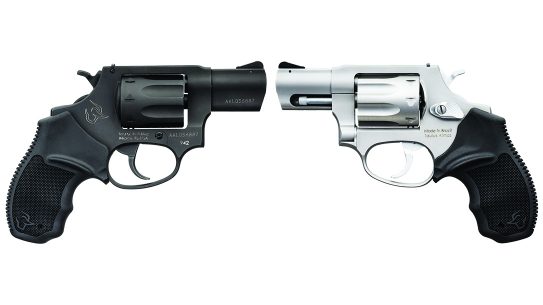