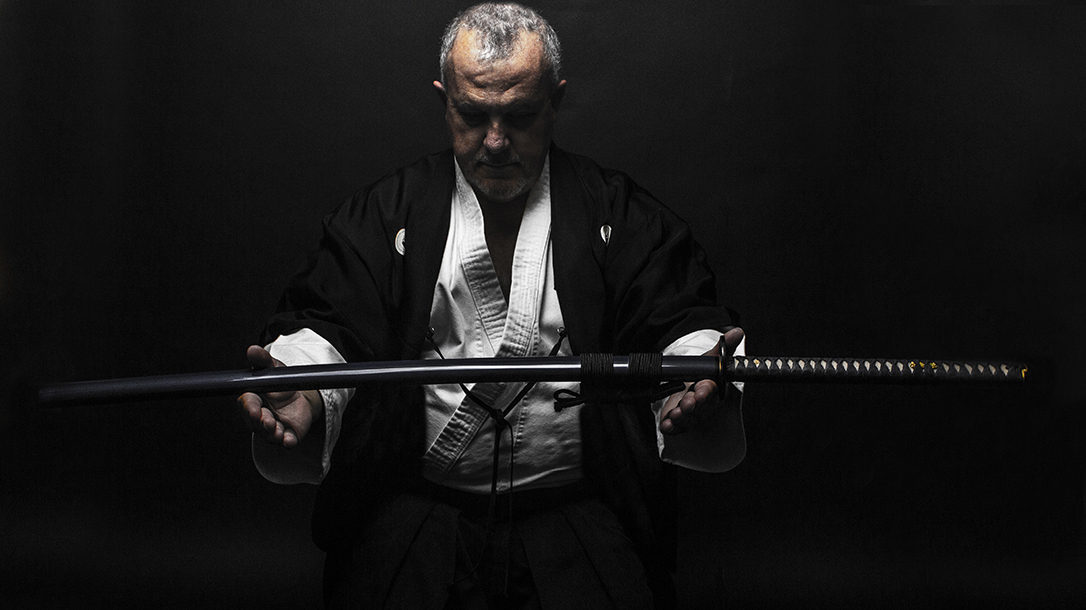 1 of 3
Photo by Credit: Fred Mastison
What Makes a Samurai Sword One of the Greatest Weapons Ever Made?
The samurai were highly trained soldiers, bodyguards and philosophers. They embodied their work and created a culture of warriors who applied the lessons of death to life. 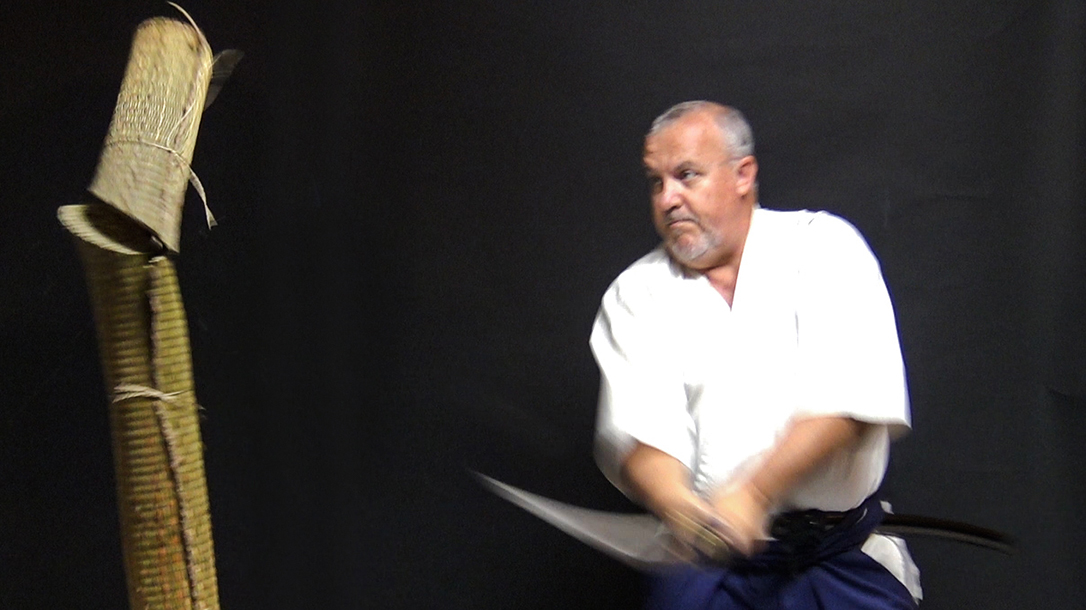 2 of 3
Photo by Credit: Fred Mastison
What Makes a Samurai Sword One of the Greatest Weapons Ever Made?
For those who practice with the sword, a process called tameshigiri is a critical and enjoyable part of training. 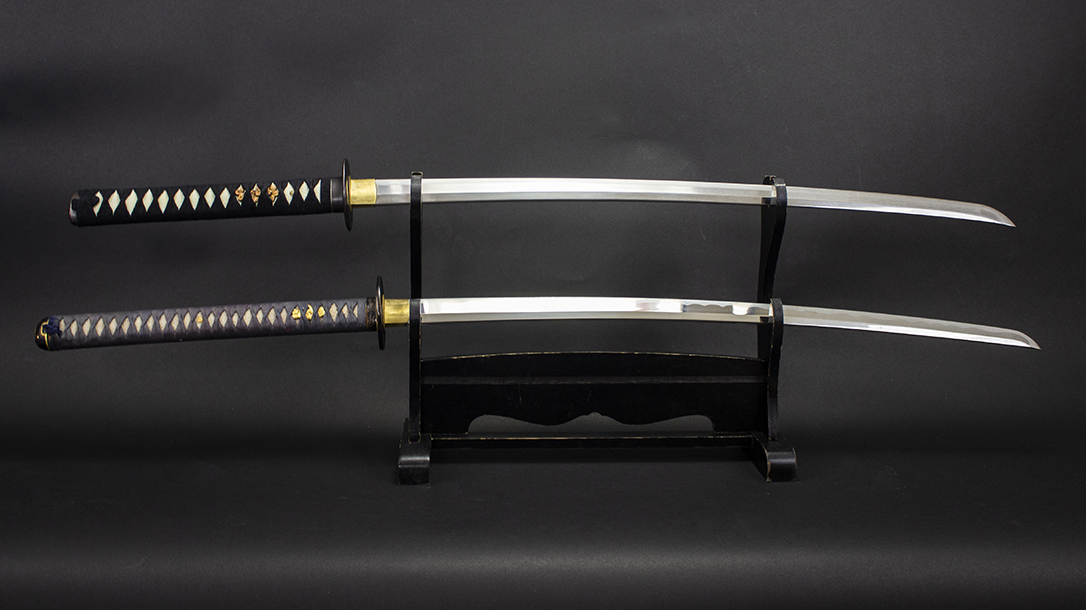 3 of 3
Photo by Credit: Fred Mastison
What Makes a Samurai Sword One of the Greatest Weapons Ever Made? 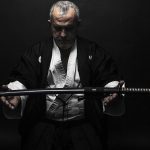 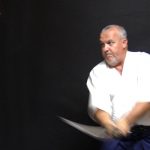 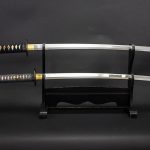 The moment has a conflicting essence of tension and calm. The two men stand across from one another, measuring almost imperceptible nuances of motion and breath. Then, in a flash, steel erupts from a scabbard as the first man flows like water to the side. The second man is now in reaction mode, trying to outmaneuver the attack. His blade makes its way toward the sky, only to miss the oncoming steel. In less than a breath, it is over, and the scene is now one man standing and one lying motionless on the ground. This is the reality of long, cold steel. This is the world of the katana. 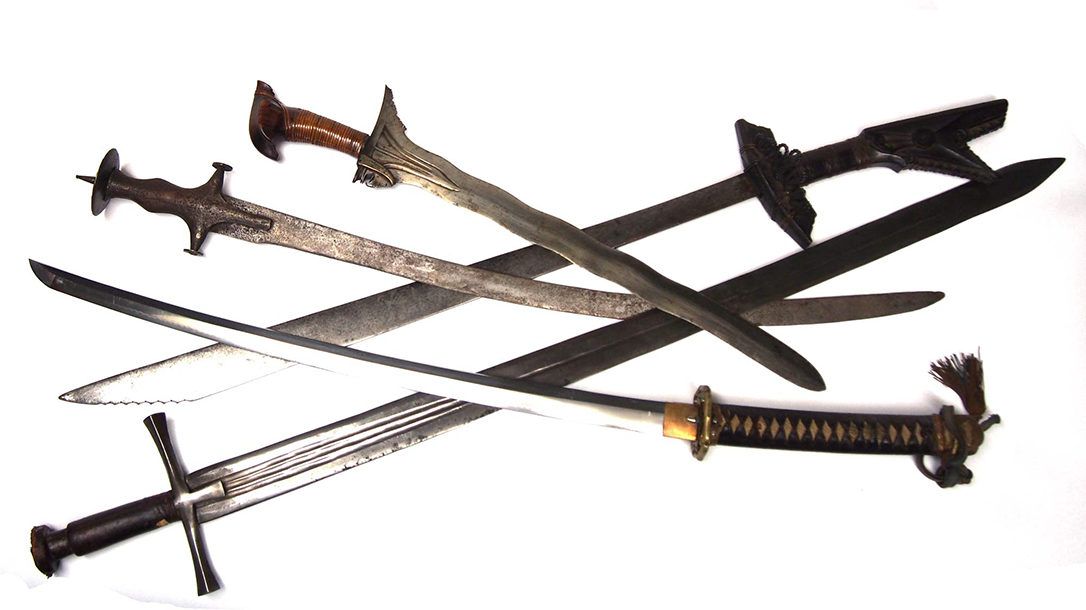 Unlike what we saw in Sunday morning martial arts theater shows, which we gobbled up as quickly as our cereals, samurai sword fighting is usually a very brief event. When steel was drawn from a scabbard, it was with the intent of killing an opponent as quickly as possible. The primary weapon used by the Japanese samurai was a long sword known as a katana.

This is a general term that covers a variety of swords but usually refers to a two-handed sword with a curved, single-edged blade with a circular or squared handguard and a long handle. These swords were typically kept in wooden sheaths or scabbards and worn inside the belt to keep them in place.

These swords are much more than simply cold steel weapons, and many are highly prized (and valuable) as art objects. Invented more than a millennium ago, the katana remains an absolute marvel of aesthetic beauty and skillful engineering. The art of making a sword is considered a national treasure in Japan, and it’s one of the most elegant processes to witness firsthand.

The katana is an exceptional weapon because of its design. It’s not just simple steel pounded into a blade. The magic of the katana is its construction, with two different types of steel. The process begins with smelting. Over a period of about three days of intense effort, katana-makers produce the base steel for the blade.

The end product is a steel known as tamahagane or “jewel steel.” The highest-quality tamahagane can cost up to 50 times more than ordinary steel made using modern methods. The swordsmith then takes one piece of the steel and begins to fold it. This reduces impurities in the steel and makes it stronger. Once the folding is done, he pounds a long, U-shaped channel into the steel. Into the channel he then hammers a lower-carbon steel and forges the two metals together.

The product of this is an exceedingly hard and sharp outer shell with a softer core and spine. The edge is even more refined, as the swordsmith coats it with a clay and charcoal mixture prior to one last firing. This gives the sword its unique wavy pattern, which appears after polishing. This technique makes the edge even harder and more durable. It also produces steel that can be sharpened to a razor edge. The sword is fired again, and then quenching begins. This is also the point at which the blade gets its telltale curve.

From there the blade is polished. This is a long process and can take as much as two weeks of ongoing labor. This not only imparts a shine to the steel, but also hones the sword’s razor-sharp edge. The swordmaker meticulously rubs the blade with a series of grinding and polishing stones as the clay wears away. As he continues, each consecutive set of polishing stones contains finer and finer silicate particles and removes less and less steel. The end result is a razor-sharp blade with a highly polished finish.

The accessories that accompany the sword, such as the handguard (tsuba), are called furniture and are as much art as the sword itself. Once assembled, the katana represents a lifetime of skills honed and attention to detail. It is truly a beautiful work of art.

Even today, Japanese swordsmiths follow these ancient traditions to produce exceptional katanas. Modern processes have emerged, and we are now seeing blades of incredible quality becoming available. Many of these are machine forged, which to many people takes away the magic. But machine forging does make it easier for us commoners to get more affordable blades.

A true Japanese folded-steel blade can range in the hundreds of thousands of dollars, while a less classic, well-made forged blade can be found for $2,000 or less. A quick word of warning for would-be sword shoppers: The ornamental swords you find in curio shops are simply for display. Do not attempt to cut with them. Few of them are designed for real use, yet they still have an edge sharp enough to relieve you of your fingers. If you are looking for a real sword, educate yourself and find a qualified instructor before you start hacking up the furniture in your living room.

The katana, while long and sharp along its entire edge, is not designed for hacking. Unlike many large European swords, this unique blade requires cutting techniques that focus primarily on the first 6 to 8 inches of the blade and include the kissaki, or tip. The katana is designed to cut as the user slices using the topmost portion of the sword. This allows the user to utilize not only its exceptional sharpness, but also blade speed as well. The hardness of the katana is legendary, and many a helmet has been found with deep gashes inflicted by a well-swung blade. In the right hands, it is capable of effortlessly removing an assailant’s arm or leg.

Some of the more gruesome aspects of the history of the katana are the testing methods employed to confirm it sharpness and durability. In some cases, recently deceased bodies were used as cutting targets. In fact, there is documentation that many convicted criminals found their way to the testing block as well. This was a relatively infrequent occurrence in the history of the blade, but it built the legend, as many swords proved themselves capable of cutting a body in half. It is this exceptional cutting ability that makes the katana so lethal.

In general, the sword is drawn and raised with the grip near the user’s head. The cut then follows a casting motion as the body moves in symphony with it. There are dozens, if not hundreds, of different cutting techniques, yet they all focus on the same arching motion that allows the katana to cut.

For those who practice with the sword, a process called tameshigiri is a critical and enjoyable part of training. This training utilizes a cutting target known as goza, sometimes called tatami omote, which is the mat that covers the top surface of tatami. Rolled up and soaked in water, with a length of green bamboo inserted in the center to simulate bone, this is believed to be the target that most closely approximates flesh.

The targets are most often set vertically, though sometimes horizontally, and there are a wide range of cuts, including diagonally left and right, up and down, as well as many combinations of cuts executed in quick succession. This cutting is more a test of the swordsman than of the sword itself nowadays, and it’s oddly relaxing. Those who experience their first cuts get an expression on their faces very similar to what we see with first-time machine gun shooters. Yes, tameshigiri is addictive to say the least.

The samurai who wielded these blades spent lifetimes perfecting every part of the art. They understood that a weakness in any part of their technique could be lethal. It was this warrior culture that generated much more than just physical techniques with swords. The samurai were professional warriors who dedicated their lives not only to the physical act of fighting, but also the philosophies and principles that accompany it.

History is full of cultures that developed warrior philosophies and writings. Yet few have been as profound as those penned by the samurai. While the weapons have changed, the philosophies regarding combat have not. Many of the lessons still apply today, and as in the time of the samurai, apply to general life as well. Two of the most profound are irimi and dochu-no-sei.

Irimi literally translates to “to enter.” However, as with many languages, the translation into English misses the essence of the phrase. It is more than just “to enter” or “get close to.” Irimi means to enter without fear, to see the danger and act anyway. This is one of the most applicable principles we’ll talk about. Its application in every corner of a warrior’s life is critical. It is an ideal that encourages the warrior to do the heavy lifting that life requires, to make the decision and act at times when most will turn away from the task. A warrior is never afraid of the realities of life and is at ease with facing them.

The Soul of the Samurai Sword

While we can easily see the combat applications of irimi, it is equally applicable to daily life. The personal conflict that brews, and the task unfinished, are opportunities for us to use the irimi principle. Enter in and deal with the issue. Solve the problem and make room in your life for more growth. Leaving things unfinished or avoiding them is sure to inhibit living a truly free life.

Dochu-no-sei means “calmness in action.” Samurai trained to develop calmness in their daily lives, as well as in battle. They had to maintain complete control over themselves, no matter what happened. This lesson easily applies to us today. Like the eye of the hurricane, we must be calm in the center so that we can be efficient in whatever we do. Training yourself to be calm and collected in any situation so that you can make the right decisions and take the right actions naturally helps you control the first move.

The samurai were highly trained soldiers, bodyguards and philosophers. They embodied their work and created a culture of warriors who applied the lessons of death to life. While this may sound cliché or flowery, it is the truth. The samurai sword was a touchstone for everything they embodied. It was razor sharp yet flexible. It was capable of dispatching an enemy while still being a beautiful work of art. With all these sublime parts coming together with the sword as their center, it’s easy to understand why the katana is considered the soul of the samurai. 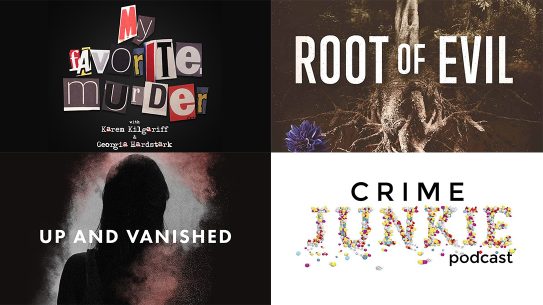 One of the most popular genres of podcasts are true crime podcasts, and Lauren...