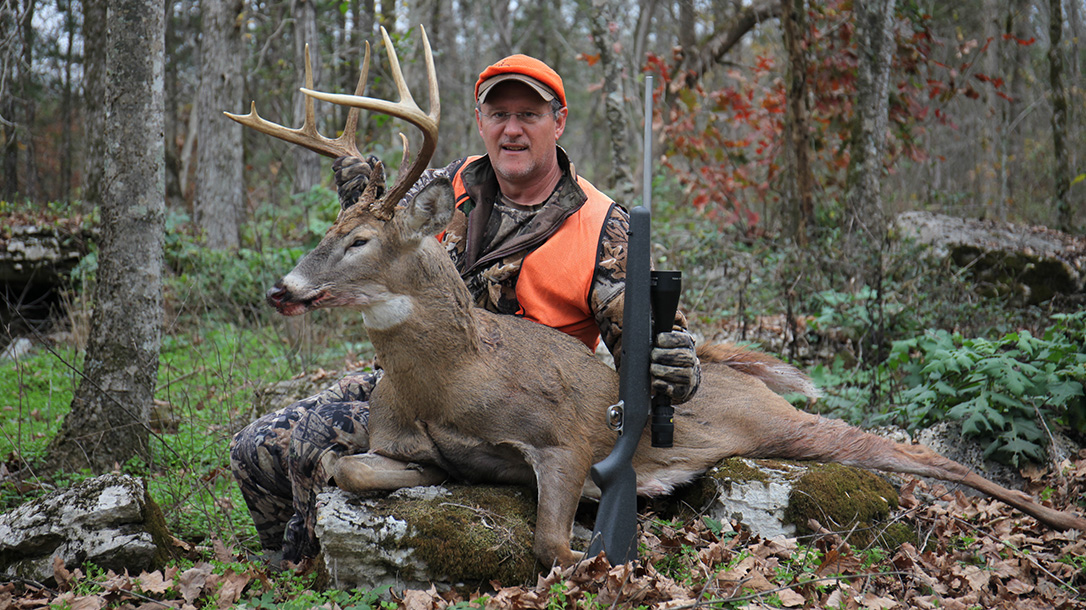 1 of 3
Photo by Jay Langston
The Author With the Barrett Fieldcraft
“I spent almost four years working inside a gun factory and have a strong appreciation for what’s involved in designing and manufacturing a rifle such as the Fieldcraft. Fittingly, the engineering and manufacturing prowess Barrett incorporates in this rifle is as lean as I’ve ever seen.” 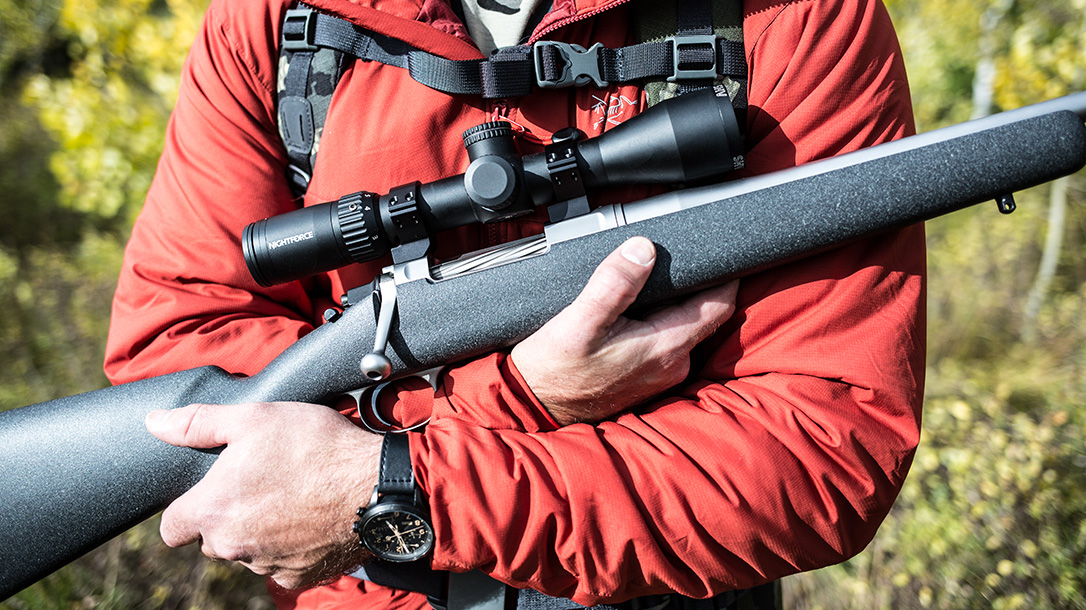 2 of 3
Photo by Barrett
Barrett Fieldcraft
The 7mm-08 Fieldcraft tips the scales at 5.2 pounds unloaded. 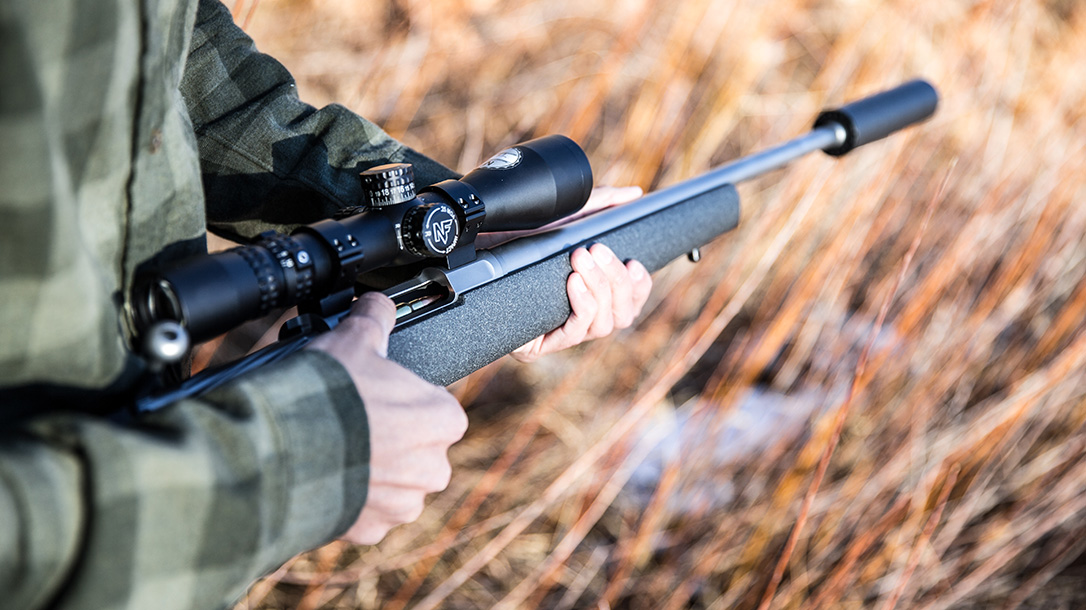 3 of 3
Photo by Barrett
Barrett Fieldcraft
The Fieldcraft uses a proprietary Timney trigger that is as crisp and dependable as the Timney triggers I have installed on several of my personal guns. This rifle’s trigger broke cleanly at 2.75 pounds from the factory. 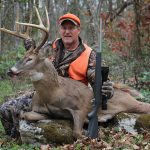 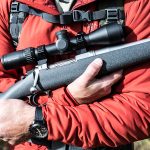 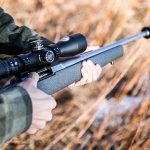 Picking each step to land in bare spots on the logging road kept my pace deliberate and didn’t spook the bejesus out of the buck as he rose from his bed 35 yards away. He knew something was up but wasn’t alarmed enough to run more than 40 yards and freeze. I saw just enough of his rack as he snuck through thick underbrush to warrant raising my rifle instead of binoculars. 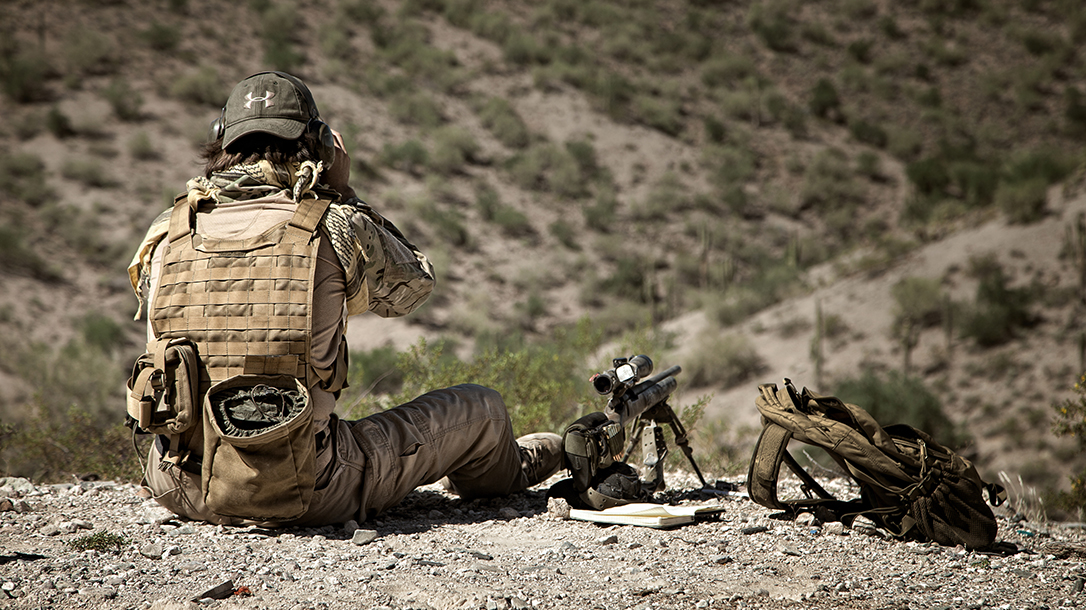 Climbing an adjacent ridge, he froze at my level. With my rifle propped on a shooting stick, I studied tiny fragments of his rack and portions of his body through obscuring brush for the next 40 minutes as he stood with his feet seemingly cemented to the forest floor.

Finally, I figured out what had divided the buck’s attention and kept him there so long. A doe in estrus finally had enough of the situation, and she stood and trotted over the ridge to the north. As the buck moved after her, I saw enough of his body and rack to know he was worth shooting.

I continued to creep slowly down the logging road, hoping I’d get another chance at that buck or one of the other monsters that prowled the western Kentucky farm.

Living where whitetails are common, and frequently trying out new rifles, has let me kill several deer using a wide array of action types in an even broader selection of calibers. When I don’t have a new rifle I need to test in hunting situations, I have a natural go-to that’s one of my favorites. It’s a lightweight bolt action chambered in 7mm-08 Remington that offers several characteristics I favor, and it’s cleanly taken almost four-dozen whitetails—several of them gnarly old bucks upwards of 250 pounds.

This past fall, I tested Barrett’s Fieldcraft in 7mm-08, which emulates and improves on several features of my familiar favorite. I live less than an hour’s drive down country backroads from Barrett’s manufacturing facility south of Nashville, so I occasionally drop by to get a firsthand look at what’s new. When I met with company president Chris Barrett, we discussed several new rifles, but he was especially excited about the company’s new Fieldcraft. I quizzed him about the origin of the rifle’s name.

“The term ‘fieldcraft’ embodies all of the skills that a rifleman needs to succeed in the field,” he said. “Mastery of shooting positions, survival in the harshest terrain, the ability to cover long distances. It just seemed like the perfect description for a rifle like this with a nod to our military heritage.”

I left that day with a 7mm-08 Fieldcraft in my pickup. During the next few days, I tried a couple of scopes and settled on a Trijicon 2.5-10x56mm AccuPoint scope that I installed with a set of Talley rings. The optic looks a little oversized for such a lightweight rig. However, it would give me a tad more magnification for range work.

Over the past 30 years, Melvin Forbes of New Ultra Light Arms (NULA) has gained a stellar reputation for building custom featherweight hunting rigs by trimming the fat from muzzle to butt. NULA produces rifles with actions closely scaled to their chamberings to make them as light as possible. So it makes sense that Barrett decided to work with Forbes with its take. The Fieldcraft follows the same principles of weight reduction and action scaling on custom rifles, and it incorporates some gun voodoo to make it accurate at the same time.

One of the Fieldcraft’s most significant features is its lightweight price tag compared to similar custom rigs. Its $1,800 MSRP hovers just higher than what I’ve found on web gun stores at $1,730. Compared to a NULA rifle with a price tag of $3,500, the Barrett Fieldcraft seems like it was made for guys who drive 13-year-old pickup trucks and like nice rifles.

The 7mm-08 Barrett Fieldcraft tips the scales at 5.2 pounds unloaded. One of the biggest weight-reduction measures Forbes accomplished years ago was to create a graphite-reinforced Kevlar stock that weighed 20 ounces. He went with a trim design that incorporated an elevated comb that slopes upward as it nears the butt, and the Fieldcraft uses the same feature. Many other rifle stock designs have combs parallel with the axis of the bore or drop at the heel. That would cause the stock’s cheekpiece to slam into the shooter’s face during recoil rather than dropping away from the face in the NULA/Barrett design. Here, however, the Fieldcraft uses a hand-laid carbon-fiber stock. Twin aluminum pillars allow the action, barrel and stock to come together under the same tension each time.

The barreled action is attached to the stock and aluminum pillars with hex-head screws. This lets the screws be torqued down to specific values, which has more benefit than merely keeping the rifle together. Specific torque values are recommended by Barrett, with the front screw tightened to 80 inch-pounds and the rear screw drawn down to 36 inch-pounds. Using a torque wrench, I have seen barrel harmonics—and subsequent group sizes—improve by tuning torque values on the rear screw. Pillar bedding makes this possible.

Another weight-shaving feature is the Fieldcraft’s blind magazine. Without the magazine well cutout, the stock is stiffer, helping accuracy. Not adding the extra weight of a hinged floorplate also takes priority over having to cycle live rounds through the chamber when unloading. That’s not a problem, though, because the Remington-style safety can stay in the “on” position while opening the bolt to unload. The blind magazine will accept cartridges up to 3 inches long.

The bolt is a twin-lug design that harkens back to the original Mauser design. An improvement on the original design, in my opinion, is Barrett’s use of a SAKO-style extractor. This is a feature that gets added to Remington 700 bolts when the action is used on custom rigs. It’s a big improvement from 700-style extractors, too. Closely examining the bolt lugs on the Barrett Fieldcraft shows a very even wear pattern, which is indicative of a bolt that is trued or square to action lug recesses. It takes blueprinting and an experienced hand on a milling machine to get a factory Remington 700 to act like that.

The bolt body has spiral flutes to cut weight, and the bolt shroud has flats at the 10 and 2 o’clock positions to match the profile of the action tube. The bolt handle is a delicate appendage, but it’s strong enough to withstand rough handling. Barrett also pinned it to the bolt body as opposed to welding it.

Finally, the Barrett Fieldcraft uses a proprietary Timney trigger. It’s as crisp and dependable as the Timney triggers I have installed on several of my personal guns. This rifle’s trigger broke cleanly at 2.75 pounds from the factory.

I didn’t have a lot of time to test the rifle at the range before taking it hunting. Also, my supply of factory 7mm-08 ammo was thin. But I found a couple of boxes of Federal’s 140-grain Partitions and Barnes’ 140-grain TSXs. The loads chronographed at 2,734 and 2,746 fps, respectively, on average. Five-shot groups at 100 yards hovered around an inch, with the Federal load’s best group measuring 0.96 inches. The Barnes load was comparable, with its best group measuring 0.99 inches.

Sub-MOA five-shot groups are pretty telling about a rifle’s capabilities, and they are statistically more reliable than three-shot groups. Because this rifle’s barrel is so thin, I took my time and spaced shots at least a minute apart. In between groups, I set the gun aside for several minutes to cool.

Not quite satisfied with the results I got with factory loads, I grabbed some virgin Hornady cases that were already prepped with Federal Match primers. I set my RCBS electronic scale to 40 grains and poured enough Varget in it to drop several loads. Next, I grabbed a box of Hornady 139-grain GMX bullets and seated them far enough out to where I felt they would make chamber-throat contact. I went back and forth, resetting the Hornady seating die until the bullet would just touch the barrel lands. Measurements checked and rechecked, I kept adjusting the seating die until I was getting minimal bullet jump to the lands.

I loaded 10 rounds and sent the first five downrange. The chronograph readings hovered around 2,760 fps, so that looked good. Still a couple steps away, I saw what looked like part of a group to the left of the bullseye. My first reaction was, “What now?” suspecting the scope bases had worked loose and scattered bullets off the target. But as I got closer, I realized I had created one ragged hole with a round impacting slightly to the left. All told, the group measured just 0.48 inches. Subsequent groups never got larger than 0.89 inches. All I needed was some scope adjustment to ready the rig for the hunt.

Back Into the Woods

Fifteen minutes after my protracted encounter with the buck, I stepped from the logging road into the edge of a pasture. I checked both ways for deer and stepped out. Truck in sight, I picked up my pace but stopped short when I caught movement along the adjacent tree line—buck!

I propped the Barrett Fieldcraft on the shooting stick and saw a nice buck standing and looking into the briers along the woods’ edge. The doe was bedded in the weeds. I saw the silhouette of her head and ears among the blackberry vines. The problem: The buck was directly in line with the farmer’s brand-new 110-horsepower Kubota tractor parked by his hay depot. I knew a pass-through shot would put a hole in that shiny orange tractor. The buck didn’t pay me any attention as I sidestepped to get a shot that would clear the tractor. At the shot, the buck went down, and the doe vamoosed.

I spent almost four years working inside a gun factory and have a strong appreciation for what’s involved in designing and manufacturing a rifle such as the Barrett Fieldcraft. Fittingly, the engineering and manufacturing prowess Barrett incorporates in this rifle is as lean as I’ve ever seen. You can bet I’ll be selling off a few safe queens to make sure this rifle gets a new home. For more information, visit barrett.net. 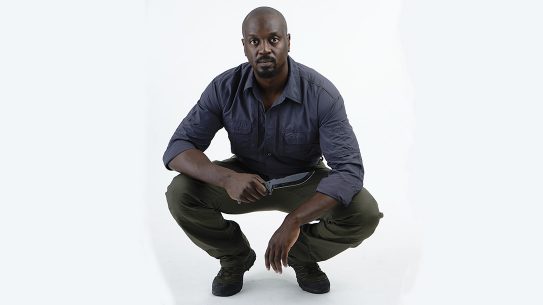