Skip to content
CORONAVIRUS UPDATE: Our Collective Guide of Facts, Tips, and More 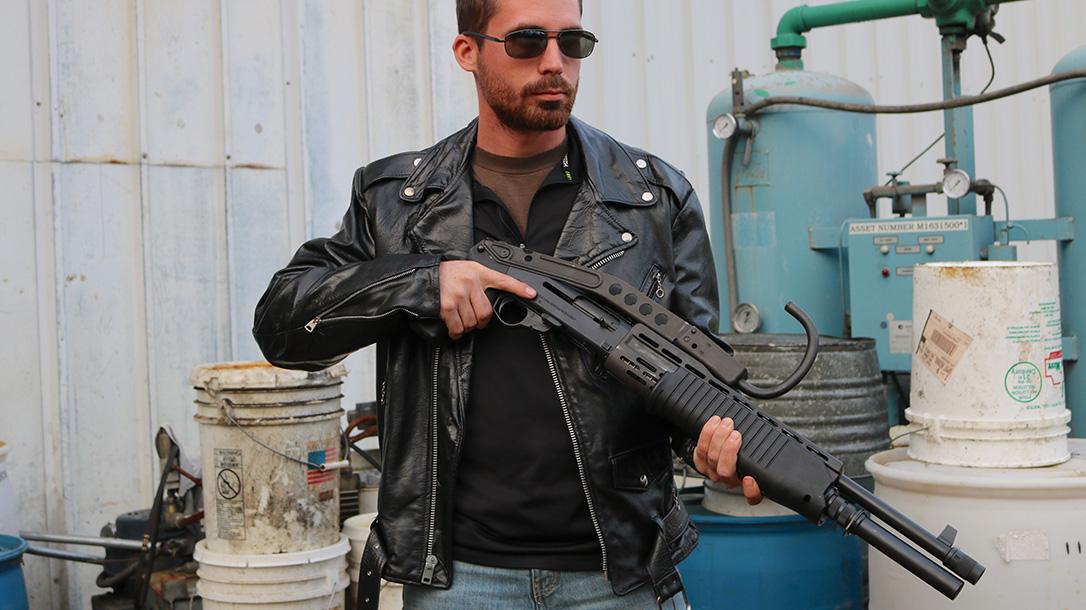 1 of 6
Franchi SPAS-12
The gun in the film sported an otherwise unadorned pistol grip, and the Terminator ran this gun one-handed as well. 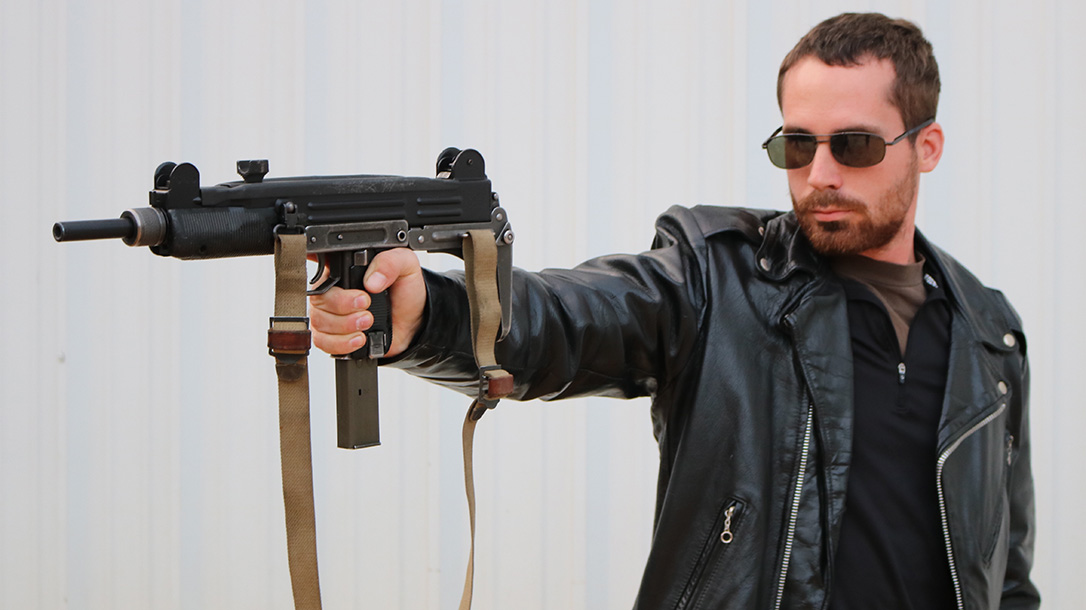 2 of 6
Israeli Uzi
The machine packs the Uzi in a DeSantis shoulder rig and runs the gun one-handed in the nightclub scene, spraying the place liberally and even making a magazine change at the appropriate time. 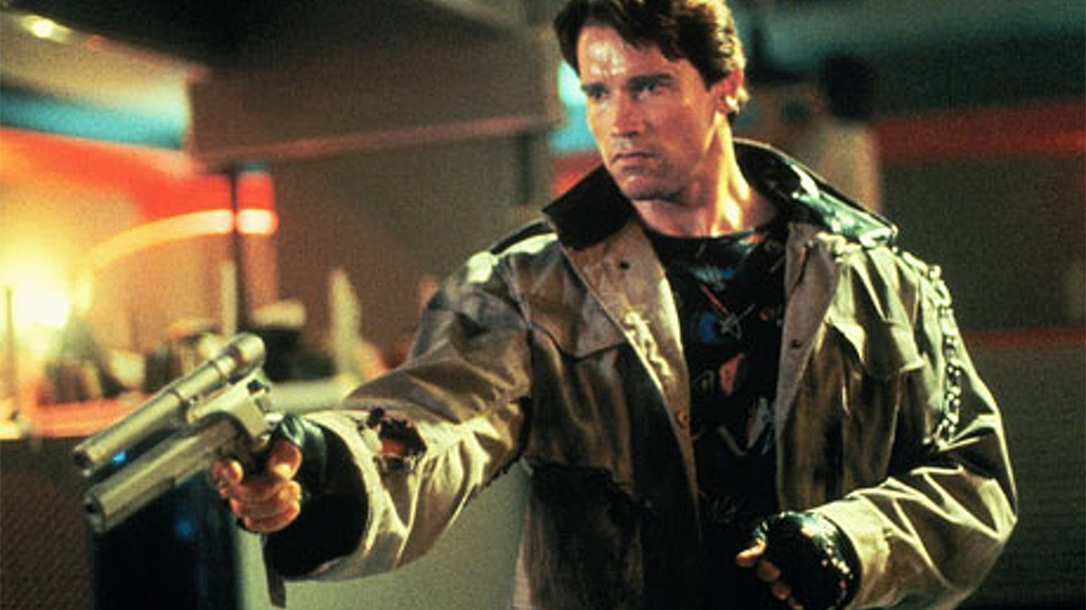 3 of 6
Photo by Hemdale / Pacific Western
Arnold Schwarzenegger
The Terminator’s primary handgun is a long-slide .45 with a laser sight. 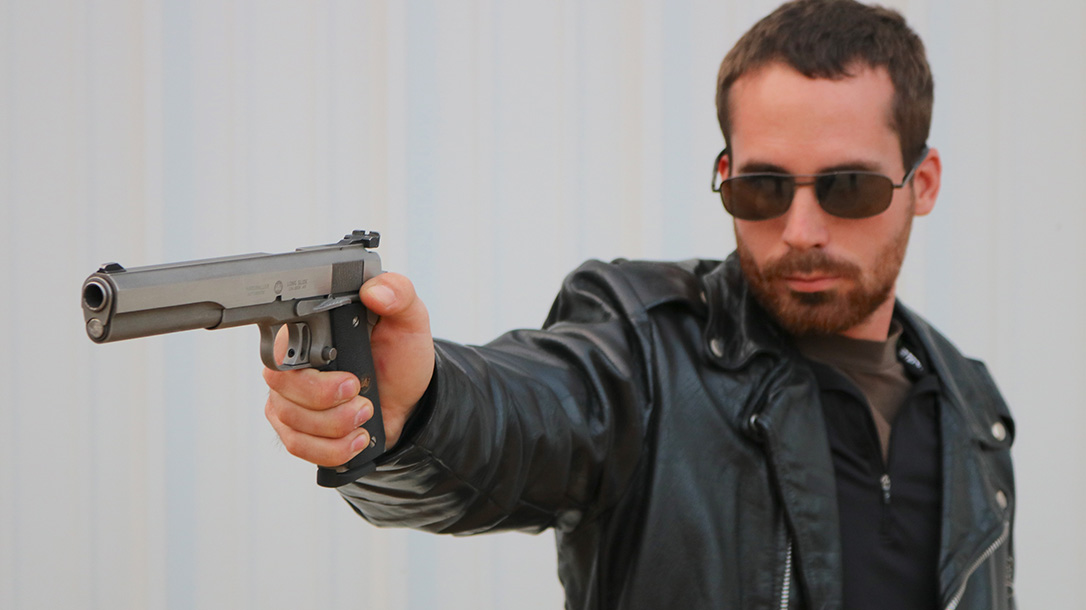 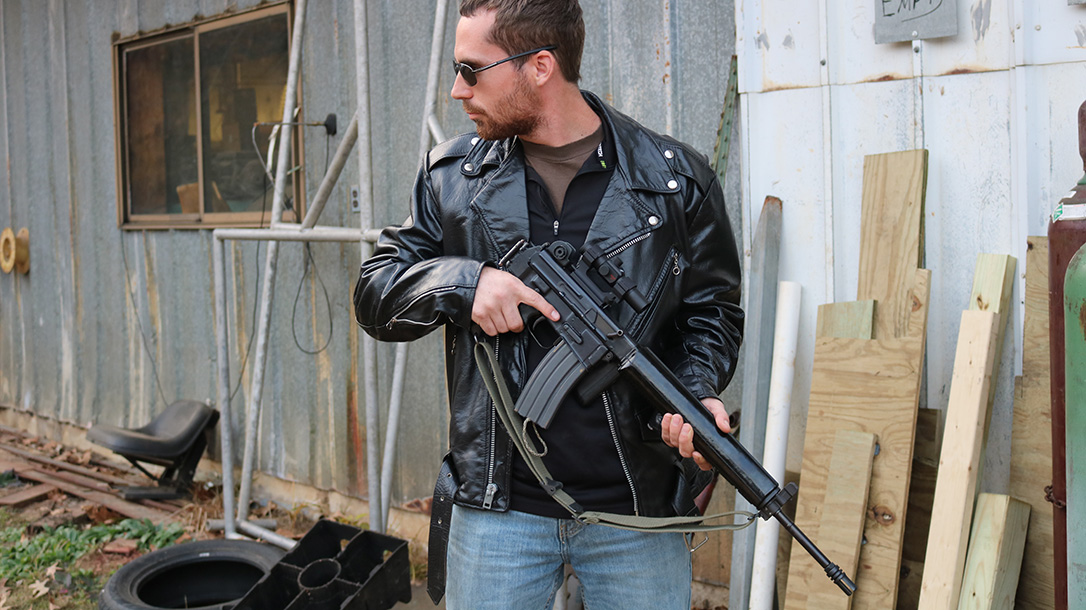 5 of 6
Armalite AR-18
The AR-18 was an evolutionary development of Eugene Stoner’s earlier AR-15. 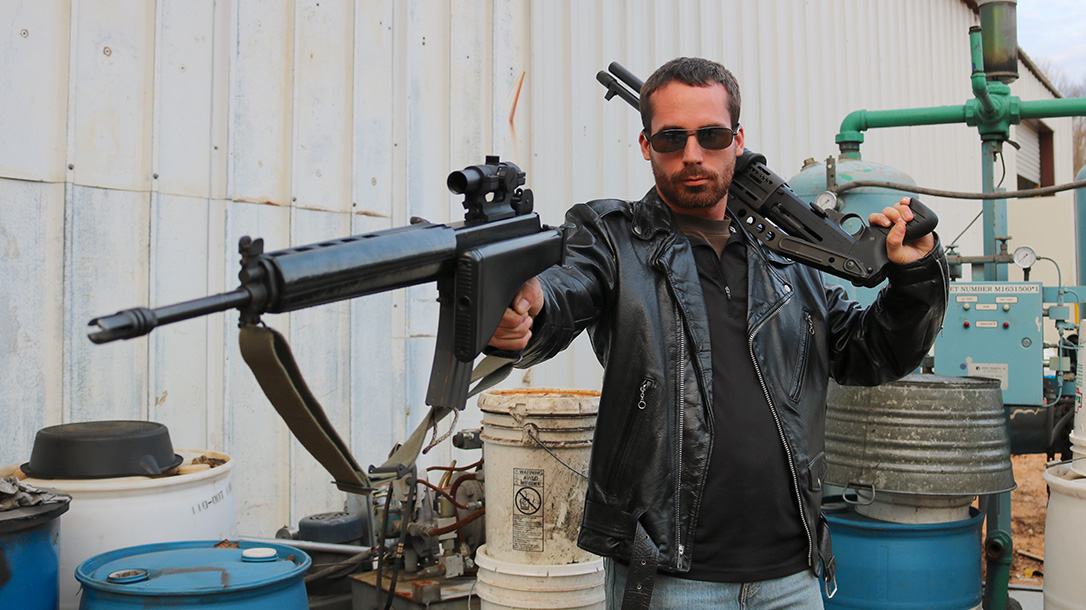 6 of 6
Guns of the Terminator
The Armalite AR-18 and the SPAS-12 armed the Terminator during his assault on a police station to which Sarah had been taken. 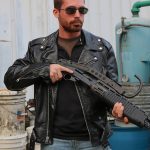 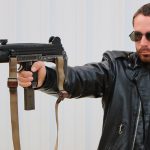 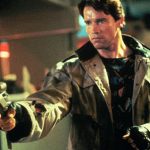 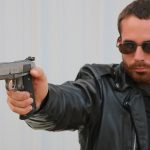 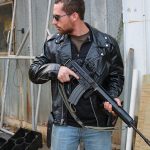 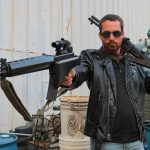 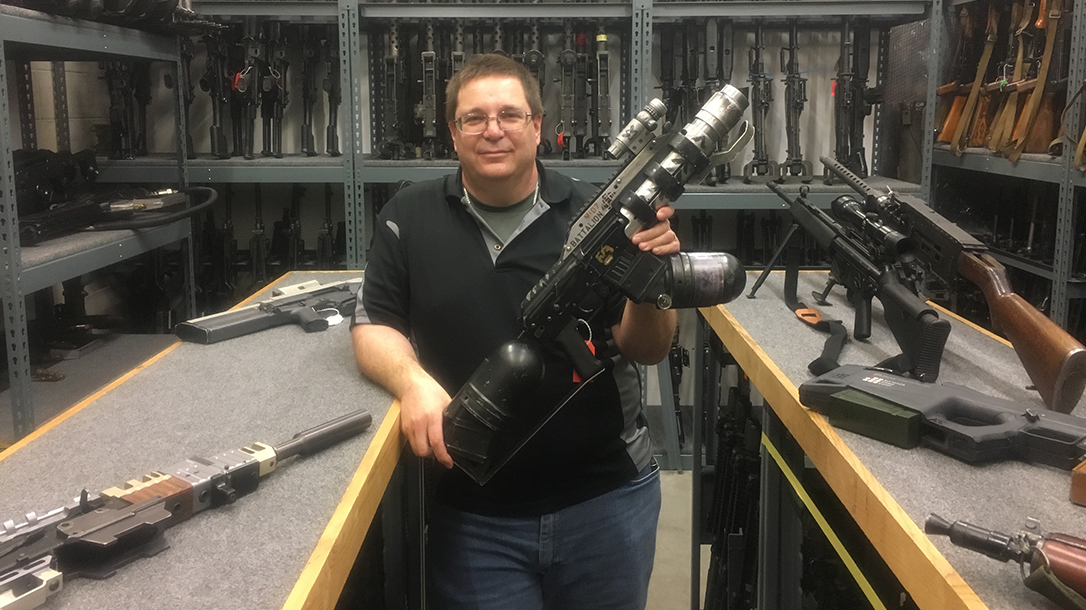 Thus, sitting atop a pool of drool in a sketchy Memphis movie theater in 1984, I got my first introduction to the Terminator, a mechanical assassin from the future that does not feel pain or pity or remorse. James Cameron’s epic sci-fi masterpiece of the same name is one of the most testosterone-charged movies ever filmed. After I first saw that movie, I wanted to be the Terminator when I grew up.

You think I’m kidding. In college, I kept a VHS copy in the VCR and watched it piecemeal over breakfast every day. I can quote the whole thing. Such stuff as this shines light on the character of my long-suffering bride. How miserable must it be to live with me?

Analyzing the reasons why The Terminator is so freaking awesome is an easy exercise. Cameron is an undeniably gifted filmmaker. It is not by random chance that Titanic and Avatar, the two highest-grossing films of all time, were both his projects. What really made The Terminator soar, however, was Arnold Schwarzenegger’s incredibly cold depiction of the machine.

It almost didn’t happen. In the early phases of the project, the Terminator was supposed to be physically unremarkable. It would be his capacity to blend in with a crowd that made him so dangerous. Michael Biehn was originally cast to play the machine while Arnold was supposed to be Sergeant Kyle Reese, the soldier from the future sent back in time to protect Sarah Connor. Sarah, played by Linda Hamilton, was the mother of John Connor, the unborn charismatic military commander who would ultimately lead the forces of mankind in their successful campaign to overthrow Skynet and the machines. While listening to these two actors reading for their respective parts, Cameron had an epiphany, swapped their roles and made cinematic history.

The Terminator was really Schwarzenegger’s greatest role ever. In 1984, he was simply an incredible physical specimen. Additionally, all he had to do was look menacing and sound weird, two things at which he was remarkably skilled. The Terminator was actually shot on a modest budget but went on to launch the careers of most of the major players as well as those of Cameron and his production staff. The meteoric rise of Schwarzenegger, Cameron, Gale Anne Hurd and others really all began here.

In the several films and television adaptations that followed, we found that there were many other Terminator models, but the Cyberdyne Systems Model 101 was hands-down the coolest. The machine weighed about 600 pounds. It was driven by a redundant nuclear power cell that would render proper service for at least 120 years. While the external flesh did inevitably age, the machine underneath remained reliably lethal.

The Terminator’s eyes perceive a variety of spectra both visible and otherwise, and they glow slightly red as a result. This justifies the machine’s penchant for wearing sunglasses both day and night. The Terminator’s neural net processor is patterned after that of the Skynet computer that built it.

The physics of the time-displacement device demands that only living flesh pass through. For this reason, the Terminator is forced to arm himself upon arrival in his destination time stream. While this bit of dogma ultimately stretches a bit in subsequent iterations, it still makes for a nicely matched conflict.

The Terminator is immensely strong and possesses onboard targeting systems that allow it to fire weapons accurately from a variety of positions that might not be amenable to flesh-and-blood humans. As a result, the machine can reliably place rounds on target with either hand and with any available firearm. The guns that Cameron chose for his pitiless killer from the future helped define the character. 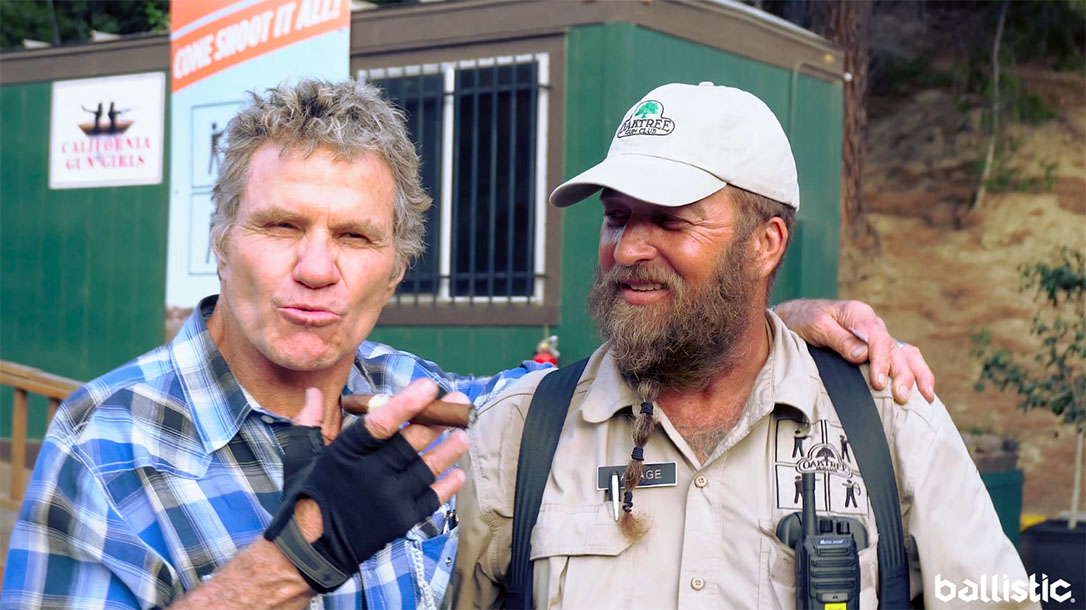 The Terminator acquires his weaponry through a civilian California gun shop. Given his obvious inability to pass a background check or produce proper identification, he just kills the shop owner, takes the guns and departs on his mission of mayhem and chaos. There seems to me to be a message there someplace, perhaps something timeless but nuanced about how gun-control laws oddly never seem to affect anybody but law-abiding citizens.

There is no explanation offered regarding why the machine’s weapons perform flawlessly in full-auto mode. However, there has been some conjecture among true believers like me that the Terminator possessed the capability to convert the semi-auto hosts to fire full-auto back in the privacy of his squalid apartment.

The Terminator’s primary handgun is a long-slide .45 with a laser sight. This gun began life as a stainless steel AMT Longslide 1911 pistol before being equipped with a primitive onboard laser designator. Nowadays, you can score a laser pointer at Walmart for $20. Back in 1984, such stuff was way more sinister.

The Terminator uses his Longslide to terminate a pair of hapless innocents before pursuing Sarah, his primary target, to a nightclub called Tech Noir. Sarah has fled to this public space on the flawed presumption that she might find safety there. Within the confines of the dark, smoky dance club and choreographed to pulsing 1980s-vintage rock music, the Terminator’s wielding of the laser-sighted handgun is several shades of awesome.

The Terminator’s long guns include an Israeli Uzi, an Armalite AR-18 and a Franchi SPAS-12 shotgun. The machine packs the Uzi in a DeSantis shoulder rig and runs the gun one-handed in the nightclub scene, spraying the place liberally and even making a magazine change at the appropriate time. The weapon used in the film sported a slotted bolt, so it was clearly a converted semi-auto Israeli import.

The Armalite AR-18 and the SPAS-12 armed the Terminator during his assault on a police station. The station housed 30 police officers armed with various sidearms and shotguns. Before the end of the assault, the cops acquired M16s that still proved ineffective against the towering armored cyborg.

The AR-18 was an evolutionary development of Eugene Stoner’s earlier AR-15. While the AR-15 used a direct gas impingement operating system, the AR-18 pioneered a piston-driven mechanism subsequently adapted to the British SA80 and German HK G36. The AR-18 was built around stamped-steel upper and lower receivers and was designed to be manufactured in simpler facilities than those the AR-15 demanded.

Because the recoil system of the AR-18 was in the forend and receiver, the gun’s stock was free to fold to the side. In the case of the gun used in the movie, staff had the buttstock completely removed. The gun fed via a pair of 40-round magazines taped back-to-back. The Terminator ran the weapon one-handed in the manner of a handgun throughout his assault on the police station.

The Franchi SPAS-12 was a novel, though cumbersome, design that could operate either manually as a pump gun or in semi-automatic mode. The gun held 8+1 rounds with its magazine extension in place. It was available with a fixed plastic stock, a top-folding sheet-steel stock or a basic pistol grip.

Trigger Time With The Terminator

But what is it like to actually fire these weapons?

The AMT Longslide is indeed a smooth-shooting, soft-recoiling version of John Moses Browning’s classic military service pistol. The gun’s 7-inch barrel and commensurate extended slide make it easy to run quickly and well. The weapon exhibits minimal muzzle flip, and its adjustable Millett sights maximize the accuracy potential of the chassis. The safety and slide release are mounted on the left side only, but are extended for easy purchase.

The Uzi is heavy for its compact dimensions, and I find myself unable to run the gun safely one-handed. However, while the Terminator is a 600-pound hyper-alloy killing machine, I am a 51-year-old U.S. Army veteran with sundry aches and pains who tips the scales at 173 pounds soaking wet. With the stock extended and utilizing the proper technique, I can keep my bursts within a standard silhouette out to 30 meters or so. The Uzi’s reasonable rate of fire lends itself to decent accuracy, so long as the shooter observes proper burst-fire discipline.

The AR-180 is the semi-auto version of the AR-18. I find that it runs about as well as a comparable AR-15. The reciprocating charging handle is an S-shaped appendage, easily accessible with either hand. The recoil is soft, and the fire controls mimic those of the AR-15. Given what was available for sale in American gun shops in 1984, the Terminator would have been well served by his AR-18.

The Franchi SPAS-12 is a brute of a thing. However, the gun’s complicated action and impressive mass tame recoil nicely. The SPAS-12 is much more reliable with high-brass buckshot and slugs than with birdshot, but the pump-action option keeps the gun dangerous regardless.

At its heart, the Franchi SPAS-12 offers little more than a comparable modern autoloading Remington sporting gun might, but the weapon’s sinister aesthetic landed it more than its share of movie roles. Cameron adopted the forend and heat shield from the SPAS-12 to the M41 pulse rifles used by the Colonial Marines in Aliens; the only other Cameron science fiction movie better than The Terminator.

The Terminator worked on several levels. The bad guy was a machine devoid of human emotion or weakness. It represented a relentless force that did not sleep, hesitate or rest. There was a pervasive undercurrent of self-sacrifice, and the very fate of humanity rode in the balance. All these attributes synergistically combined to make The Terminator exceptionally great fun, particularly by the standards of the day. Stan Winston did the effects at the pinnacle of his craft, and the film launched several remarkable careers.

This question is always good for some spirited discourse: If you had the option of having your brain transplanted into a Cyberdyne Model 101, would you do it? You’d look like Schwarzenegger in his prime and live at least 120 years. Your love life would take a hit, but you’d have onboard night vision and a thoroughly menacing accent as consolation prizes. I’d certainly be tempted. 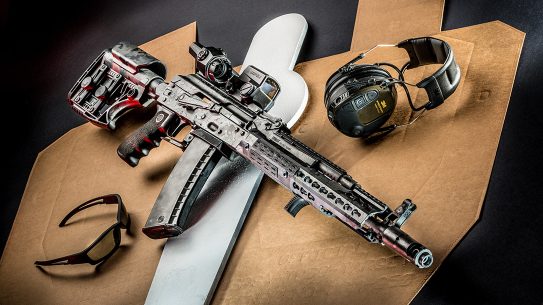 Using an AK-74 for competition might seem ambitious, but Joe Firearms upgraded a rifle... 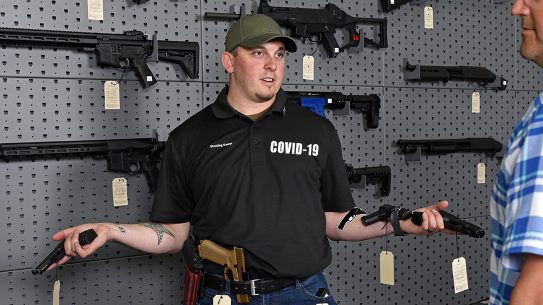 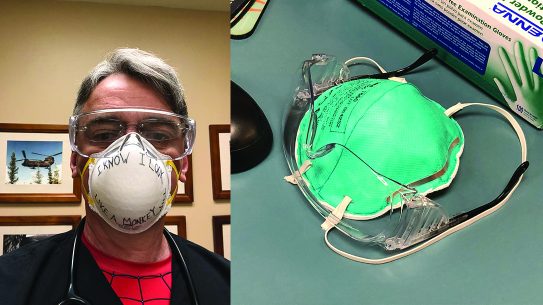 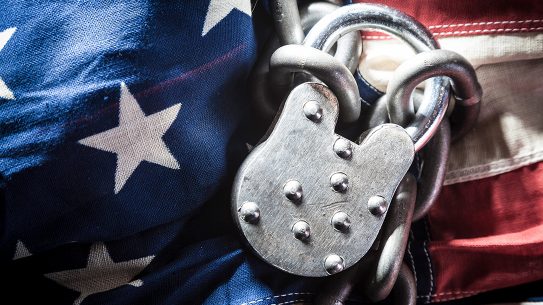 WATCH: Our Free 4-Part Video Series on Handloading Your Own...

Are Virus-Sniffing Dogs a Viable Option During the COVID-19 Outbreak?