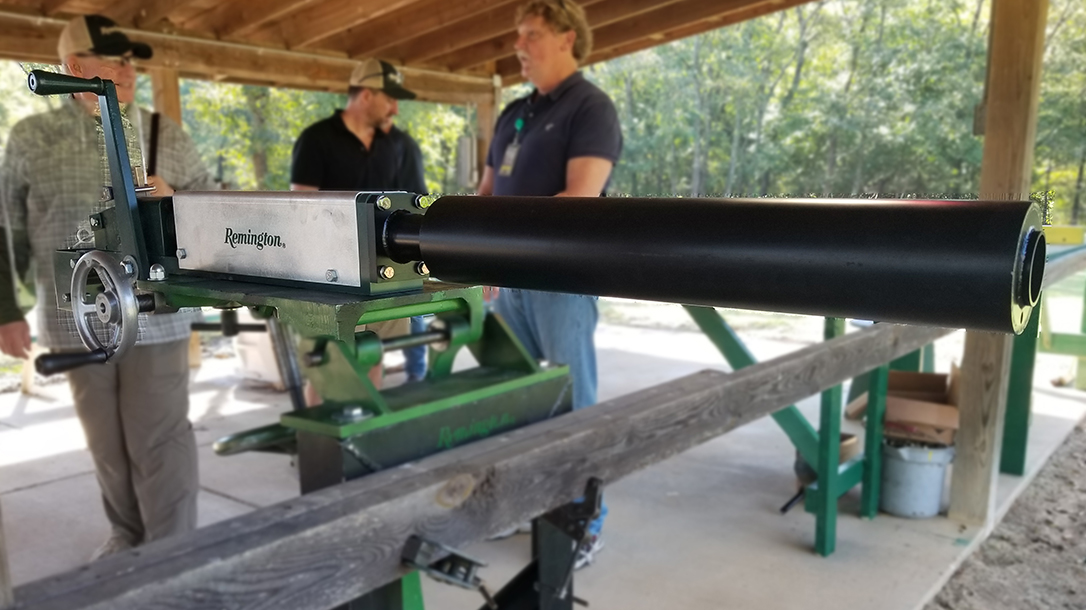 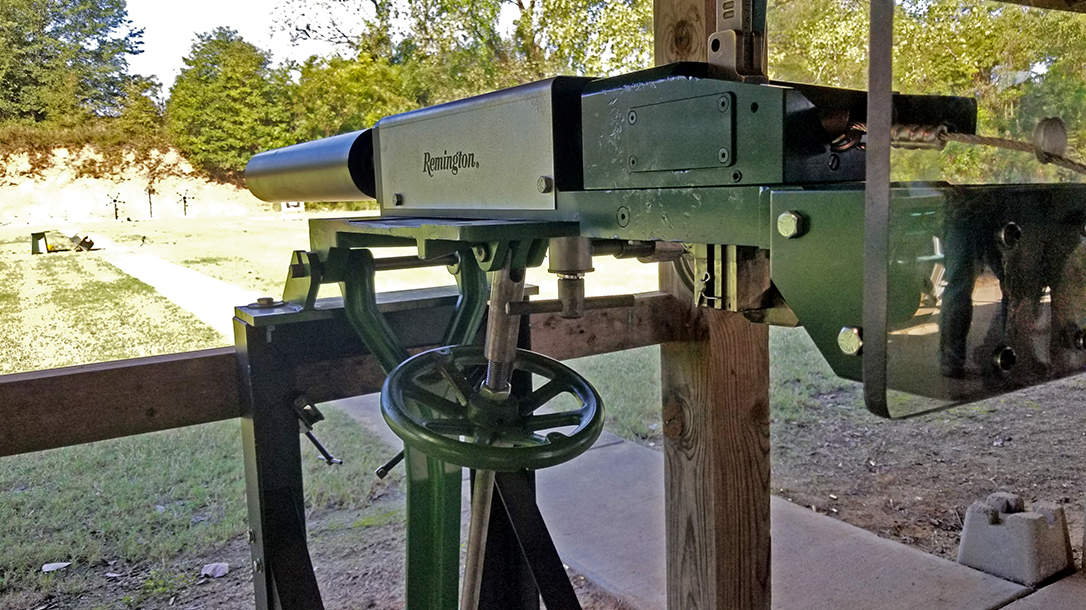 2 of 3
Photo by Andy Grossman
Remington MasterBlaster
There is no industrial gun in the entire world that is more powerful, more accurate, and safer. 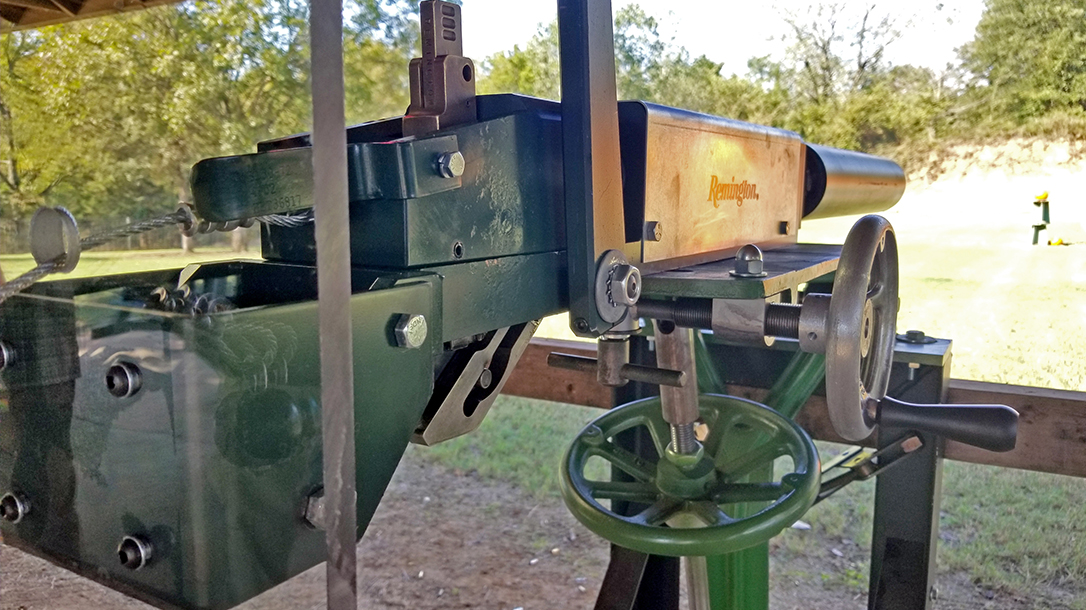 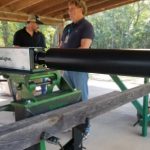 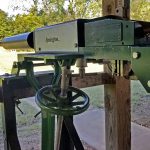 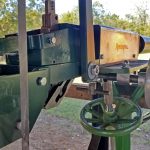 At a recent media event at the Remington ammunition factory in Lonoke, Ark., I had the pleasure of shooting some of the best firearms Remington has to offer. But there was definitely one very unique gun that stood out: the Remington MasterBlaster. 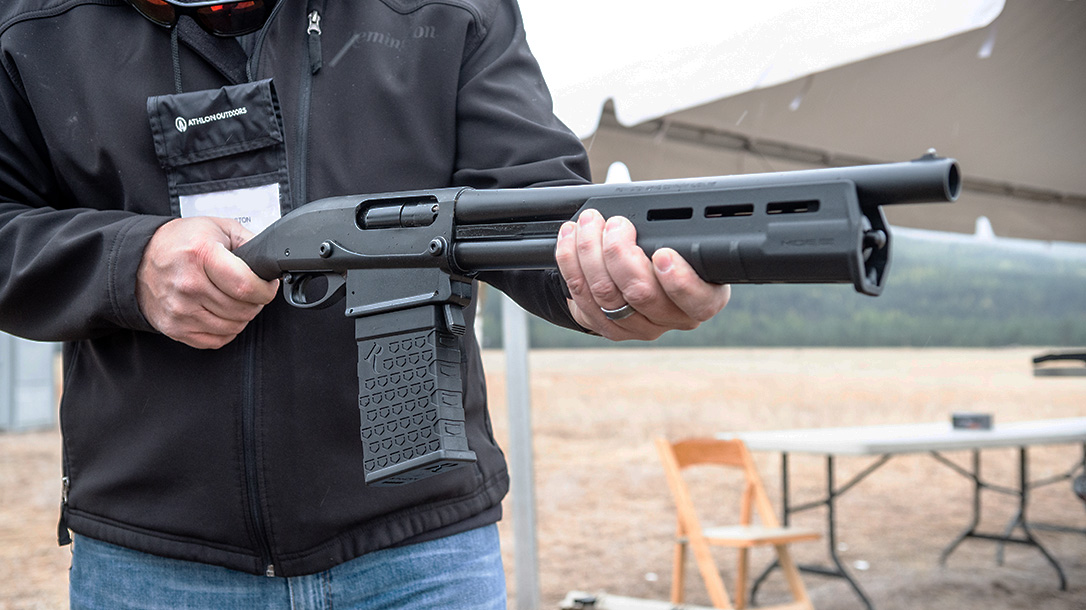 How do we describe it? It’s an 8-gauge industrial gun; a 5-foot long by 5-inch wide, 100-pound beast of a gun. To better understand it, let me explain my experience.

I don’t think any of us had any idea what we were about to do when the folks from Remington came and told us they had a special surprise for us on the range. We walked out to the range and found this monster of a shotgun standing there, pointing downrange at a pumpkin.

“Oh, hell yeah, this is going to be fun.” That’s all I could think as I walked up to the firing line when it was my turn to pull the trigger cable and blow up a pumpkin.

I turned the industrial gun’s traverse wheels to get it aligned with the pumpkin that sat about 50 yards downrange atop a stool. After that, I grabbed the giant 3-ounce, 8-gauge slug and placed it on the loading platform.

I got even more excited as I grabbed ahold of the operating handle and pushed it forward. The industrial gun almost seemed to thank me for feeding it when I pushed that operating handle forward.  I looked at the range master and confirmed it was time.

The MasterBlaster doesn’t have a traditional trigger. It utilizes a simple lanyard that you just give a little pull straight back. With that simple pull of the lanyard, the industrial gun came to life with an earth-shaking bang followed by a whole bunch of laughter and childlike giggles from everyone behind me.

Downrange was a different story. I aimed A little bit low. The stool burst into a barrage of splinters and the pumpkin shot straight up in the air. The pumpkin was wounded, but not dead, so it was time for a second shot. We reset the range and fired again. This time the pumpkin was not so lucky. It exploded into a thousand little pieces and covered the range like a blanket.

What Is the Remington MasterBlaster?

The 8-gauge industrial gun is actually not a gun at all. It is classified as a tool and as a tool, the MasterBlaster has many different uses. One can think of it as a sledgehammer with a very long handle; a handle that can reach out around 300 feet accurately.

One of the uses for theMasterBlaster is for clearing out obstructions in a rotary kiln. The temperature inside one of these rotary kilns is around 3,000 degrees. The material inside is sticky at that temperature and will start to form a ring or a clinker inside the kiln, which will block the flow. You just stick the MasterBlaster in the end of the kiln and shoot the ring or clinker away.

Another modern-day use is in the metal industry; it’s called tapping. The metal producers fill a huge pot with their material and heat between 3,000 and 5,000 degrees. When it’s time to empty the pot, they shoot a metal plug out of the bottom of the pot. The plug is the metal cooled off. 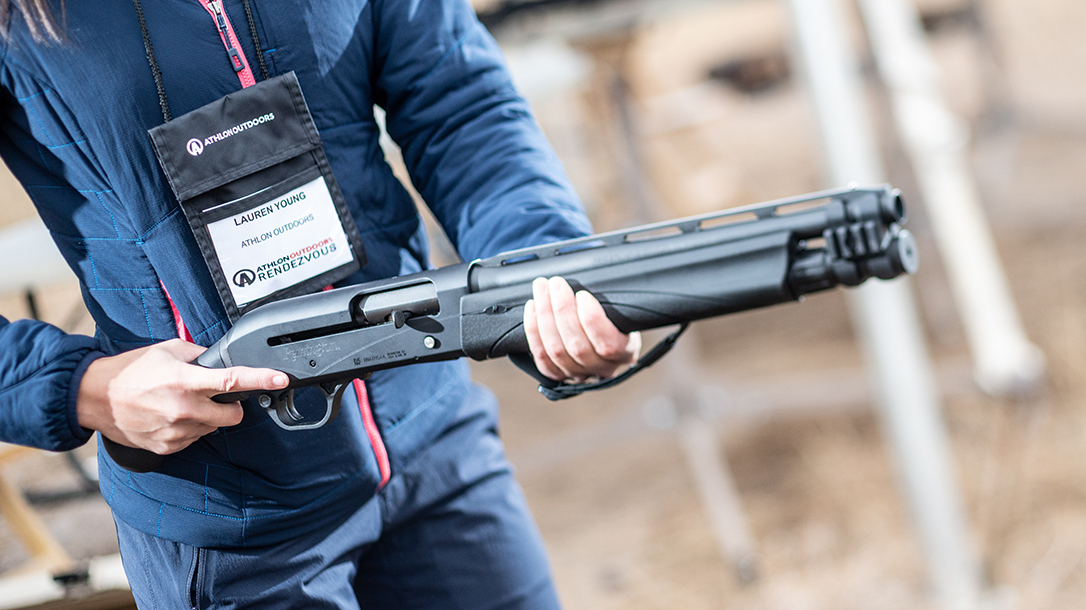 Before the development of the Remington 8-gauge “cement gun” in the 1930s, Kilns had to be shut down and cooled before workers with picks and bars were able to go in and painstakingly pry loose the buildup of rings, clinkers, balls and snowmen. It was slow, difficult, and expensive. Kiln downtime eroded production efficiency and profits. The “Cement Gun” was Remington’s solution to this problem and its development of the 8-gauge shell revolutionized an industry.  Since that day, Remington has continued to improve the industrial gun, proving its worth in multiple industries.

Remington’s latest industrial gun is the most effective, sophisticated multi-industry tool of its kind. Built like an artillery piece, Remington developed the MasterBlaster to withstand the most severe kiln conditions. Four-and-a-half tons of muzzle energy enable a 3-ounce lead magnum or 2-ounce and 3 once zinc payloads to deliver knockout punches accurately out to 300 feet. There is no industrial gun in the entire world that is more powerful, more accurate, and safer.

How Do I Get One?

I know what you are thinking because I thought it also: “How do I get my hands on one of these?”

The answer is simple, you can’t, not unless you have a real need like owning a giant kiln. Industrial customers have the option to purchase or lease the MasterBlaster direct from Remington, but a normal consumer can not get their hands on one. Sorry.

There are at least 200 of these industrial guns out in the field in the U.S. and around 100 overseas. Remington services all of them in Lonoke, Ark. Remington also fabricates around 25 new MasterBlasters a year. Most industrial customers have their industrial gun for many years before it needs to be rebuilt or replaced.

I was honored to have the opportunity to shoot one of these incredibly badass tools. It is a perfect example of the “see a need, fill a need” mentality that Remington uses in every one of its firearms and rounds of ammunition it puts its name on.

If you are an industrial customer that needs more information on an industrial gun, you can contact Remington’s Industrial 8-gauge department at 501-676-4150. 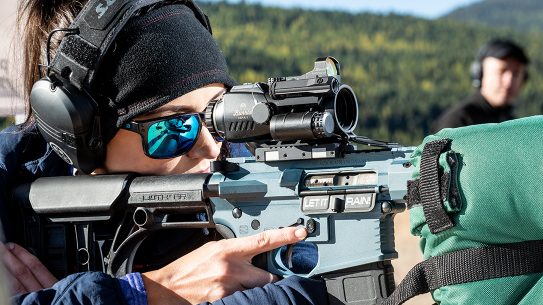