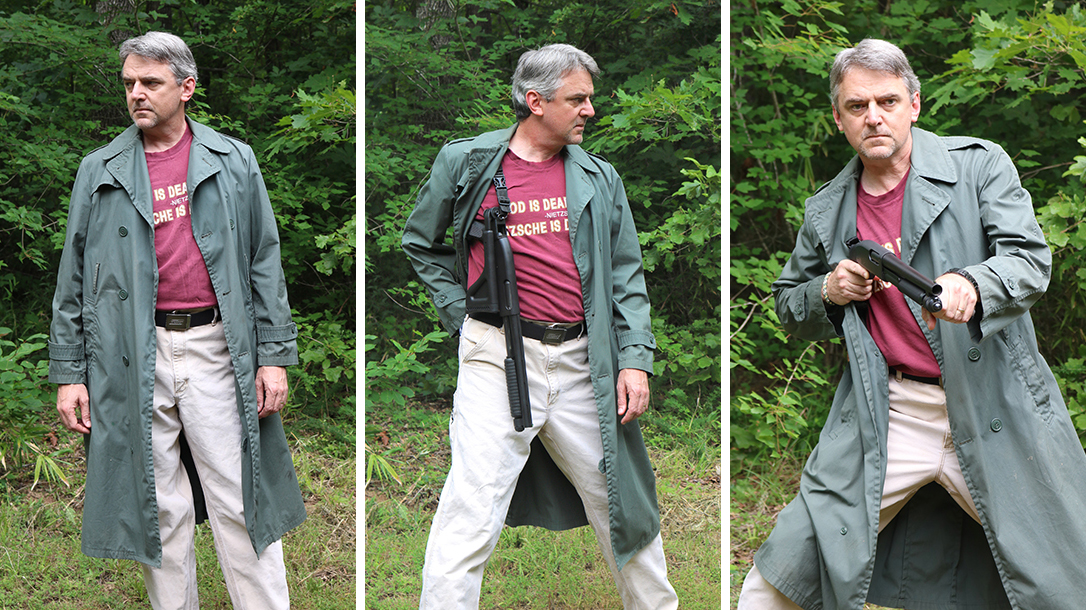 Photo by Will Dabbs
"For those times when you need to excise all the ambiguity from the timeless question of whether or not you brought enough gun, here’s how you can actually pack 4+1 rounds of full-bore scattergun chaos comfortably underneath a proper windbreaker." - Author Will Dabbs
Comment(s)

Before we get to the sawed off shotgun, let us appreciate the resplendent detritus of armed combat from the vantage of an urban emergency room. The 9mm versus .40 S&W debate was fulminant and bellicose right up until somebody declared the centenarian 9mm to be effective after all and everybody stopped caring. I have indeed seen the spark of life expeditiously snuffed via 9mm handguns. However, I did once have a guy walk into the ER and inform me that he had been shot in the pelvis with a 9mm. I offered to at least have him sit down so he could be more comfortable. He politely declined. 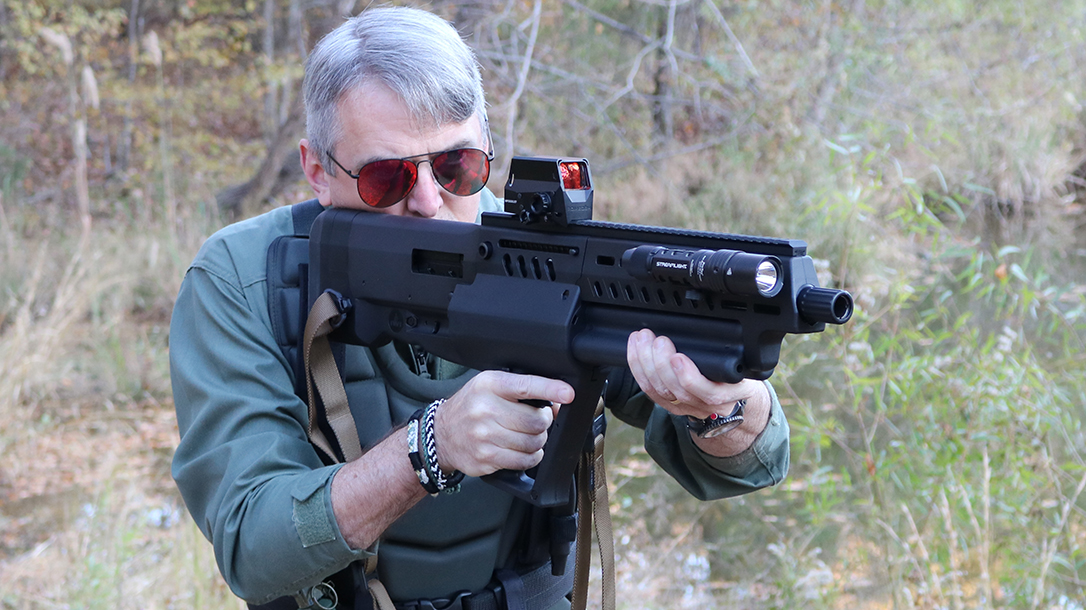 John Moses Browning’s .45 ACP is comparably aged, but, like America, it’s big, fat, obnoxious and loud. Expanding .45 ACP bullets are indeed the stuff of nightmares downrange, but I have nonetheless encountered two unfortunate miscreants who were shot in the torso point-blank with .45 ACP rounds and survived.

Rifle wounds are invariably icky. A Canadian sniper recently put lead to some ISIS puppet at a range of more than 2 miles. This shot reportedly covered 3,540 meters, besting the previous record by more than a kilometer. While there was no doubt a spot of luck involved, this unnamed Canadian Special Forces shooter was an undeniable stud.

However, the effectiveness of a rifle round is a function of bullet velocity, shot placement and a smattering of chance. Let the velocity drop unduly, particularly with some of the newest stubby 5.56mm guns, and you have just built a very expensive .22 rifle. While nothing works as well at long distances, close-range rifle hits to soft pieces of anatomy can sometimes just punch tidy little holes. It still sucks on the receiving end, but it sucks later. In a real-world defensive engagement, I want it to suck now.

Why Pack a Sawed Off Shotgun?

The one sort of handheld firearm that consistently left me gobsmacked in the ER was a shotgun. At appropriate ranges, a scattergun is like wielding a gigantic ice cream scoop. Close up, it really doesn’t matter if you are using buckshot, birdshot or slugs. Nothing rips a human body to pieces quite so efficiently.

Nobody really needs to pack a defensive shotgun covertly. However, if we just had what we needed, we would all be commuting to work on foot, Tweeting via smoke signals, and spending our evenings picking each other’s parasites. This is America. We are all about illogical extremes. If you need examples, I would submit Lady Gaga’s wardrobe, whatever the Kardashians are doing this week or congressional anything.

What if itinerant rhinos, grudge-bearing great white sharks or the errant minor Greek deity showed up agitated on your doorstep with mischief in mind? Your favorite tuned Glock isn’t going to cut it in rarefied situations such as these. For those times when you need to excise all the ambiguity from the timeless question of whether or not you brought enough gun, here’s how you can actually pack 4+1 rounds of full-bore scattergun chaos comfortably underneath a proper windbreaker.

Now don’t be stupid about this. One in 21 adult Americans has a concealed-carry permit, but check your local laws before packing an undercover shotgun. Some locales stipulate that your carry gun be a pistol. Running afoul of such stuff as this can bring undue attention from our friends in law enforcement.

Back in 1934, when Congress passed the National Firearms Act (NFA), the $200 transfer tax on short-barreled rifles and shotguns effectively ended their commerce. Nowadays, however, inflation has taken the fangs out of this onerous law. While hardly pocket change, we can drop $200 on some fairly stupid stuff these days.

One of the not-so-stupid things you can do with $200 is shorten the barrel on your favorite scattergun. Such an enterprise involves filling out a BATFE Form 1 from the agency’s website. You fill the form out in duplicate and submit it along with a check for $200, a pair of passport photos, fingerprint cards and a truly ridiculous self-attestation of your own citizenship. You then think about something else for six to nine months. Eventually, the same government that enjoys $600 toilet seats, congressional fact-finding trips to Aruba and enough computer power to listen in on my cell phone conversations in real time sends the form back approved. You then retire to your workshop.

My Sawed Off Shotgun Build

It actually doesn’t take a great deal of talent to shorten a shotgun barrel. I have done several using a cutoff wheel on my table saw. Cut the tube a time or two close to the muzzle to get comfortable with the process. Then mark the barrel with masking tape and carefully cut it for real. Dress up the end with a Dremel tool and you’re good.

I set new front sights with my drill press and a hand tap, but you could do the same thing with a hand drill if you’re careful. Replacement front sights are available at Brownells. Simple beads are just a few bucks. Radioactive night sights will set you back a bit more.

Once trimmed back, your homebuilt sawed off shotgun will indeed pattern liberally, even at close ranges. If you want to tighten your patterns, have the muzzle threaded for screw-in chokes, also available at Brownells. If there isn’t anyone local who can internally thread your barrels, the Internet can connect you with folks who will do it for about a C-note.

Furniture Shopping for a Sawed Off Shotgun

The world is your oyster when it comes to furniture options for your new scattergun, but I found only one manufacturer offering exactly what I needed. Choate Machine and Tool has been in this business for decades, and Fred Choate is one of the nicest guys in the gun world. His stocks and accessories are well reasoned, nigh indestructible and made in Arkansas.

Choate made the side-folding stock that HK used on its MP5K-PDW submachine guns. Nowadays, the company makes stocks and accessories for a bewildering array of weapons. Its shotgun components in particular are top flight.

I built one 12-gauge Remington 870 and another in 20. Both guns were inexpensive pawnshop beaters until I stripped them down and refinished them using bake-on ceramic engine block paint. This stuff runs about $10 a can at your local auto parts store. Once properly cured, it lasts forever. I built up one of these guns more than two decades ago, and it still looks new despite some fairly hard use. Cook this paint in your wife’s kitchen oven and you’ll get to meet a divorce attorney. However, these components could conceivably be cooked in a cheap box-store toaster oven.

The 12 gauge got a simple pistol grip along with a pistol-grip forend. The 20-gauge wears an indestructible side-folding stock. The side folder comes with a minimalist forend that does not interfere with the stock when folded. Both rigs sport sling swivels on top and bottom. Here is where our project gets weird.

The Joys of Sewing

Question my manhood if you must, but sewing is fun. I bought a spool of nylon webbing from Amazon and sew the stuff using standard needle and thread. The needle passes through painlessly, and whipping up my own carry gear is a great way to kill a lazy evening. Walmart carries polymer sliders and buckles. If that won’t do it, Amazon has a greater selection than you’ll ever need.

Thread your webbing into each of the sling swivels on your Choate pistol grips. Burn the edges to keep them from fraying. Sew or thread plastic buckles where you want them so you can dismount the gun quickly. I found that a single loop suspended the guns muzzle down from my shoulder. A second loop configured across my back keeps the whole rig in place despite vigorous movement. Customize the size to your frame and the whole shebang is genuinely comfortable.

Once properly configured, both of these guns ride comfortably underneath the right armpit. Swinging the guns into action is markedly faster than the same undertaking with a conventional sling. The vertical foregrip on the 12 gauge helps manage the stubby gun’s not-insubstantial recoil. At 15 meters, birdshot will liberally pepper a standard silhouette. At the same range, I can keep slugs on target from the hip until I grow weary of doing it.

The 20-gauge version is just dreamy. Popping the polymer buckle drops the gun and allows the stock to be extended. At that point, the gun is a fairly precise instrument, particularly with slugs. Winchester offers its PDX1 Defender ammo in both 12- and 20-gauge versions. The 20-gauge sort launches a solid lead slug. The 12-gauge variant also throws a slug but adds a little buckshot in for an Information Age variation on the Revolutionary-War-era buck-and-ball load.

Each gun will indeed hide underneath a proper jacket, but that is not the most practical application. It is rather the perfect way to pack a proper personal howitzer if you’re out fishing or wandering about where the wild things roam. In my neck of the woods in the Deep South, those are water moccasins. Back when I lived in Alaska, the bears stood up to 9 feet tall and could weigh half a ton.

I recently read a story about an 11-year-old boy who saved his uncle from a brown bear attack in Alaska. The kid wielded a pump-action shotgun loaded with birdshot at amazingly close range. This exemplary example of miniature manhood apparently continued engaging the monster at near-contact range with his shotgun until the threat was no longer threatening.

Even if marauding bears the size of Volkswagens or venomous serpents longer than your leg are not part of your local threat array, nothing says, “Don’t screw with me, dude,” like the gaping maw of a proper shotgun. There are some viable applications for covertly packing truly serious firepower. A beater pawnshop shotgun, Choate Machine and Tool, and an evening in front of the TV with a needle and thread can leave you prepared for anything.

This article on the sawed off shotgun is from the spring 2018 issue of Ballistic Magazine. For digital and print subscriptions, please visit OutdoorGroupStore.com. 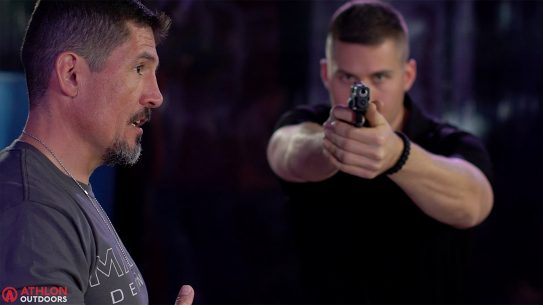 To correspond with his Battleline Tactical courses, Tanto took some time at SHOW Show...