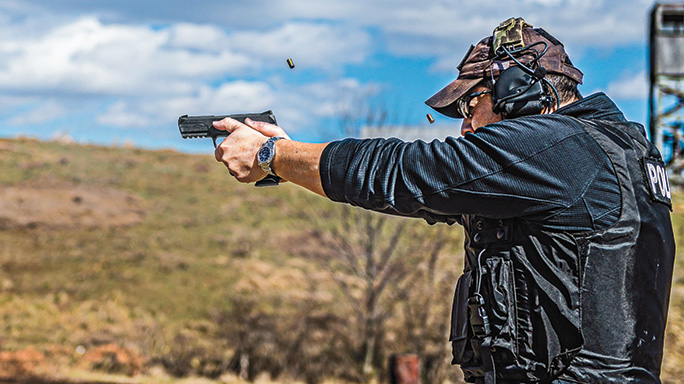 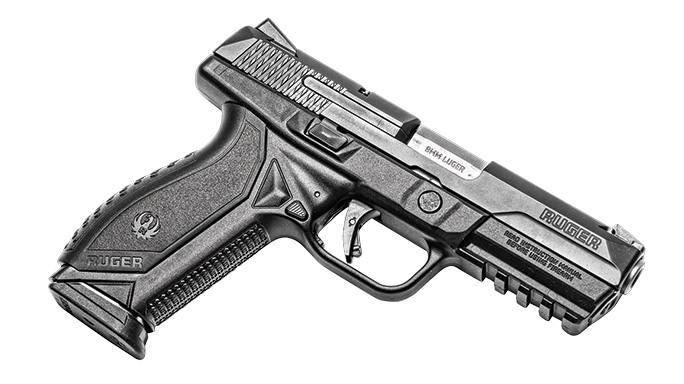 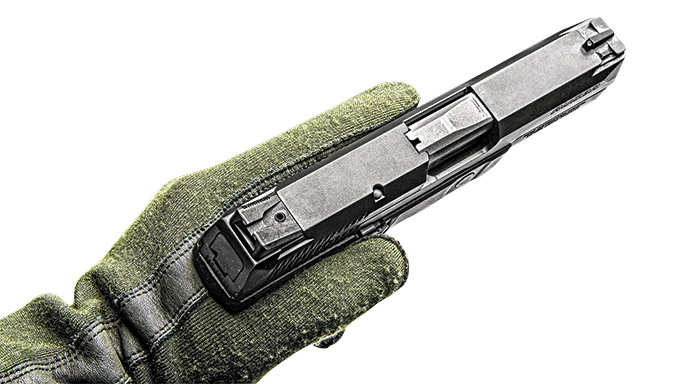 3 of 9
American Beauty: The 9mm Ruger American Pistol
The slide is black-nitride coated to protect against corrosion. 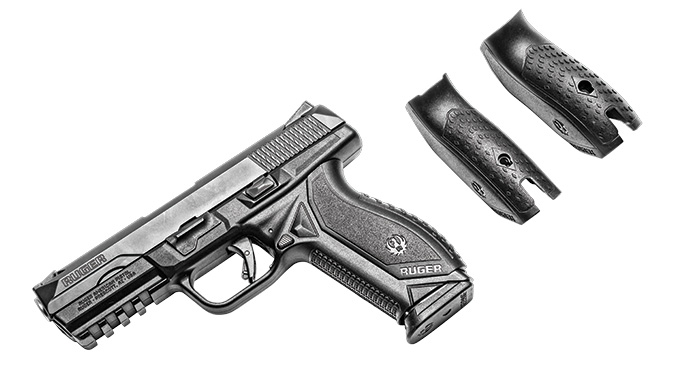 4 of 9
American Beauty: The 9mm Ruger American Pistol
The Ruger American’s wraparound grip modules are each sized differently to adjust for trigger reach and palm swell. 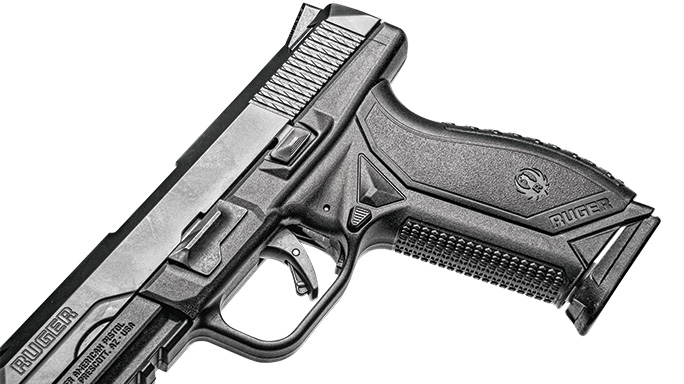 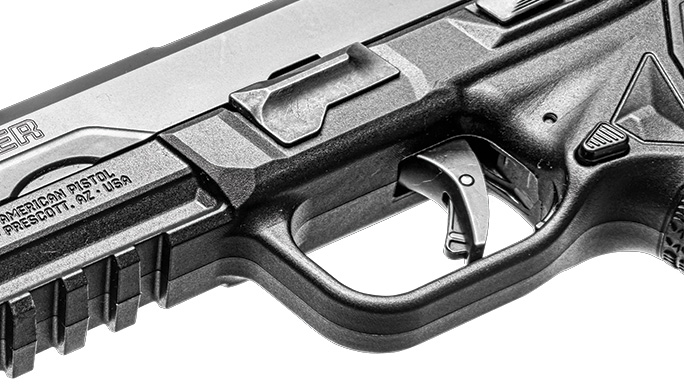 6 of 9
American Beauty: The 9mm Ruger American Pistol
The Ruger American has a “pre-tensioned striker system,” which allows for a short and crisp trigger pull. 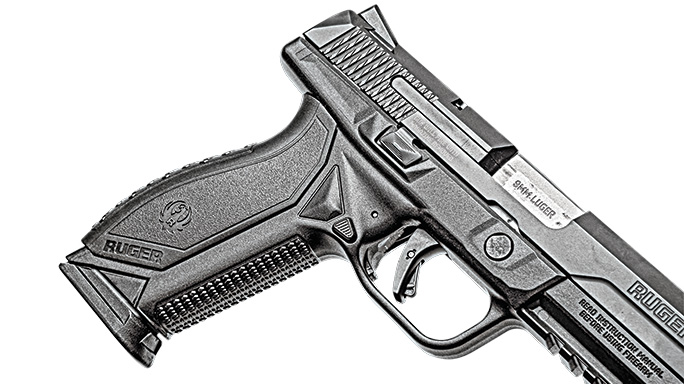 7 of 9
American Beauty: The 9mm Ruger American Pistol
The magazine release buttons and slide stops mirror each other on both sides. 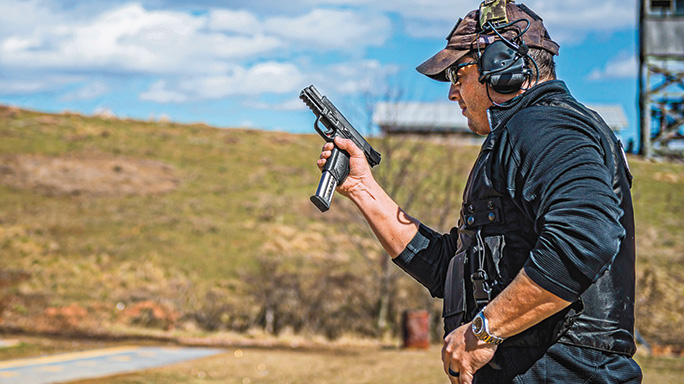 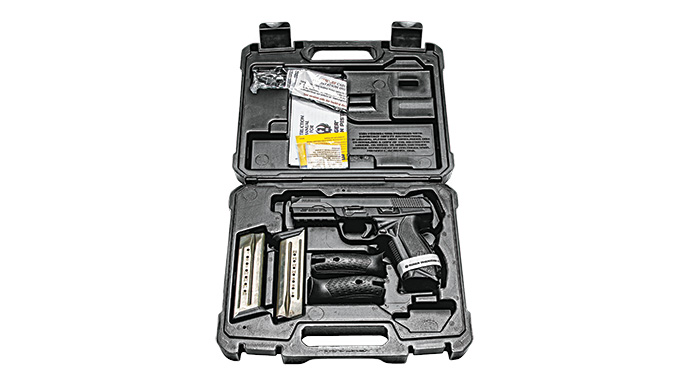 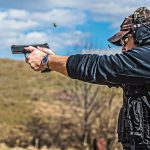 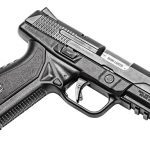 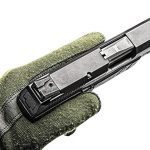 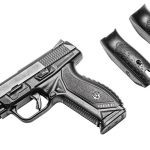 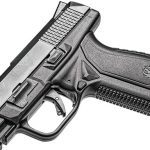 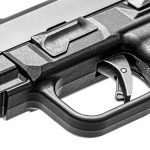 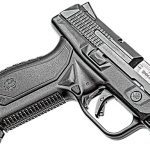 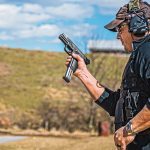 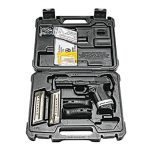 Many would argue that two or three major manufacturers already dominate the polymer-framed, striker-fired pistol market. They are so well entrenched in this market that when other companies try to make headway, they usually find it difficult to gain much ground. When Ballistic asked me to take a look at the brand-new Ruger American Pistol, I was curious, and a couple of questions immediately came to mind. How does it stack up against its polymer-framed, striker-fired competition? Why had Ruger decided to design and produce a new pistol only a few short years after the debut of its SR line?

Well, it seems the folks at Ruger spent some quality research and development time talking to law enforcement and military trainers, firearms experts, and even distributors and retailers about what they wanted in a reliable pistol. Designing an entirely new pistol gave Ruger the freedom to fully incorporate end-user suggestions rather than simply forcing some modifications on an existing model. After spending about a month with the Ruger American, I can see why some agencies and individuals will want to take a serious look at this all-new pistol.

Reducing recoil is an obvious priority in the design of the Ruger American Pistol. The first subtle hint: the decision to chamber this pistol in 9mm and .45 ACP and leave the .40 S&W out for now. A more obvious design feature is the patent-pending Recoil Reducing Barrel Cam, described by the company as “a scientifically engineered system that reduces recoil.” The low bore axis and natural grip angle further aid the shooter in managing the recoil of this 30-ounce pistol.

I found the 9mm version of the Ruger American Pistol a pleasure to shoot. The grip felt natural and made quick sight acquisitions a breeze. Follow-up shots were fast and accurate. As expected, the Ruger American stood in stark (positive) contrast to the snappy .40 S&W duty pistol I am required to carry every day as a law enforcement officer.

Another design feature of the Ruger American is its “pre-tensioned striker system,” which allows for a short and crisp trigger pull. My test pistol’s trigger averaged 7.38 pounds over five trigger pulls according to my Lyman digital trigger pull gauge.

That being said, the audible and tactile reset felt a little longer and less positive than other pistols I regularly carry. While the Ruger American’s trigger reset was my least favorite attribute, I imagine a number of aftermarket trigger companies will eventually sweep me off my feet with a drop-in solution.

The pistol’s ambidextrous controls and interchangeable grip modules make the Ruger American a really attractive option for agencies that train shooters of all different shapes and sizes. After all, even the most accurate out-of-the-box pistols require shooters to be comfortable with them for their potential to be fully realized. Being able to adjust the American’s grip size to more closely fit one’s hands is a clear advantage over pistols that don’t have this feature.

The magazine release buttons mirror each other on both sides and are placed where both left- and right-handed shooters would traditionally expect to find them. Allowing the shooter to fine-tune their grip, the Ruger American’s wraparound grip modules are each sized differently to adjust the trigger reach and palm swell. The 9mm version comes with small, medium and large options, while the .45 ACP has just medium and large grip modules.

Initially I shot the Ruger American Pistol with the factory-installed medium-sized grip module. When I switched it out for the largest one to compensate for my burly mitts, I achieved much more positive support-hand palm contact with the pistol’s grip. Switching the grip module is simple and only requires the use of an included #10 Torx wrench.

Ruger designed the American Pistol with increased safety in mind. The majority of negligent discharges can happen when an operator fails to ensure the chamber is clear prior to pulling the trigger when breaking the pistol down for cleaning. While fault for these incidents always lies squarely on the individual, our agency in particular has taken some pretty extreme measures to minimize the possibility of this type of negligent discharge.

The Ruger American Pistol’s design provides two safety features that eliminate the potential for this type of negligent discharge. The slide must be locked back before the takedown lever can be rotated for disassembly. This helps ensure any round present in the chamber is ejected prior to disassembly. With the slide locked back and the takedown lever rotated into the down position, a magazine will not fully seat into the pistol, thus reducing the possibility of the introduction of any new ammunition. Most importantly, removing the slide does not require a pull of the trigger.

The Ruger American’s stainless steel slide rides on the rails of the pistol’s one-piece, machined stainless steel core that also houses its fire control components. For increased durability, these components are mostly composed of stainless steel or nickel-Teflon-coated steel (for lubricity). The slide and chassis are both black-nitride-coated to protect against corrosion. The 9mm’s 4.2-inch barrel (4.5-inch for .45 ACP) is also made of stainless steel and is tested for sustained use with even high-powered +P ammunition.

Ramped three-dot Novak LoMount Carry sights come standard on the Ruger American. For duty use, I prefer a front sight with a tritium insert and a rear sight designed to aid in one-handed manipulation of the slide. The pistol comes with two nickel-Teflon-coated magazines, although three would be more ideal for true duty use. The standard 9mm magazine holds 17 rounds, and the standard .45 ACP magazine holds 10 rounds.

Honestly, my only previous experience with a Ruger duty handgun was the stainless steel Speed-Six I carried as a seasonal police officer in Ocean City, Maryland, more than 20 years ago. I have owned a wide variety of duty and everyday-carry pistols since then, but never one from Ruger. However, the Ruger American 9mm may change that.

The Ruger American Pistol looks like it has what it takes to challenge popular incumbents such as the Glock 17, Smith & Wesson M&P9, and Springfield Armory XD. It performed very well on the range. The accuracy I achieved fell well within any expectations for a duty pistol, and I experienced zero malfunctions in the 600 rounds fired. Its true ambidextrous controls, attention to recoil management and added safety features are enhancements that should catch the eye of agency buyers and individuals alike.

As cliché as it may sound, it seems clear that a lot of real-world experience went into the design of this duty pistol. In a very crowded market, Ruger seems positioned to really make an impact with a great new American-made product. 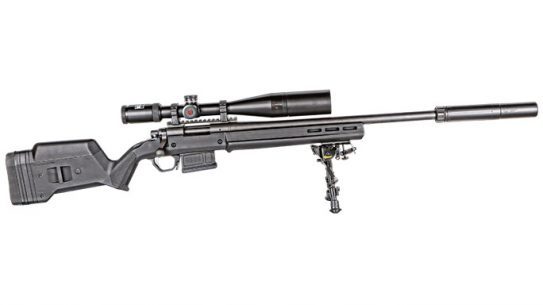 8 Cheap Ways To Upgrade Your Remington 700

Don't want to break the bank? Here's a list of eight accessories that will...